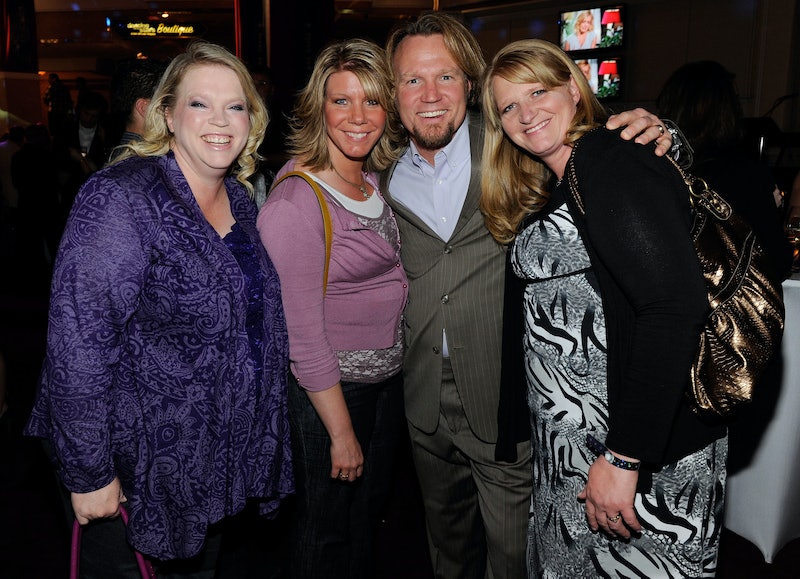 TV shows like Big Love, Sister Wives, and My Five Wives offer looks at polygamy, but only from a specific viewpoint. For some Americans, TLC's reality series Sister Wives may even teach them all they know about polygamy. Sister Wives centers on a family that self-identifies as Fundamentalist Mormons, though the Fundamentalist Church of Jesus Christ of Latter-day Saints broke away from the Mormon church. The practice of polygamy hasn’t been sanctioned by the Church of Jesus Christ of Latter-day Saints (which is the official name of the Mormon church) since 1890 when Church President Wilford Woodruff ended the practice. The Mormon church has actually denounced the practice.

That's a pretty strong stance against polygamy — so it's intriguing that after over 120 years of it not being sanctioned, the Mormon church still needs to make its views clear.

One of the reasons Mormons are so notoriously associated with polygamy is because of people like Warren Jeffs. Jeffs was the leader of the Fundamentalist Church of Jesus Christ of Latter-Day Saints — a polygamist sect not recognized by the mainstream Mormon church. He was placed on the FBI's Ten Most Wanted list in 2006 for arranging marriages to underaged girls. Jeffs himself allegedly had 79 wives, with 24 of them under the age of 17. Now he is serving life in prison for sexually assaulting two girls. Lifetime just released a movie about Jeffs, entitled Outlaw Prophet, starring Tony Goldwyn.

With people like Jeffs in the world, it's clear why the mainstream Mormon church does not want to be affiliated with polygamists. However, that's not to say all polygamists are associated with Jeffs either. The Brown family from Sister Wives, for example, identify as fundamentalist Mormons (according to Meri Brown's tweet below) and practice polygamy, but they have nothing to do with Jeffs.

Polygamy is clearly a controversial topic, but it applies to other groups besides the FLDS. And it's important to note that Merriam-Webster defines polygamy as "marriage in which a spouse of either sex may have more than one mate at the same time." Along with polygamy usually being associated with Mormons — it's also usually associated with one man having multiple women as his wives. And people like Kody Brown only help to perpetuate the one-sided view of polygamy.

Polygyny is the practice of having more than one wife at a time, while polyandry is the practice of having more than one husband at one time, so polygamy is an umbrella term that captures both of those. Some communities in Nepal practice polyandry (although the custom is fading) and the woman takes on multiple husbands — who are usually brothers. Polyandry works for them because the brothers could take on different responsibilities for the upkeep of their land, while keeping it all in one family. Another case of practical polygamy is in Vietnam, where it's not legal, but some people practice it due to the low population of men.

In the Islam religion, the Koran says that a man can have up to four wives — but he must treat them all equally. In the US, since polygamy is illegal, Muslim men practicing polygamy get around the law just like Brown did — they marry one wife in a legal ceremony and the rest of their marriages are through religious ceremonies that are not recognized by the state. Also like the Mormon religion, polygyny is not a common practice for Muslims. Polygamy is not outlawed in Judaism either, but it's a rare practice for Jewish people.

You still with me?

Religion and polygamy are so closely linked because early biblical figures, like Abraham, Jacob, David, and Solomon, had more than one wife. Beyond just religiously-based polygamy, there is also polyamory, the practice of having more than one romantic relationship at a time. Another sometimes difficult concept to understand, polyamory does not have a strict definition, but it's consensual between all partners involved.

Moral of the story: polygamy is more complicated than just one bride for every brother.

In our modern world, it can be hard to understand why anyone — regardless of gender — would want to enter into a polygamous relationship. Which is what draws people to shows like Sister Wives. It's fascinating to see real people openly discuss their unconventional situation and answer the questions you've always wanted to know the answers to. And maybe a few you didn't even realize you had.