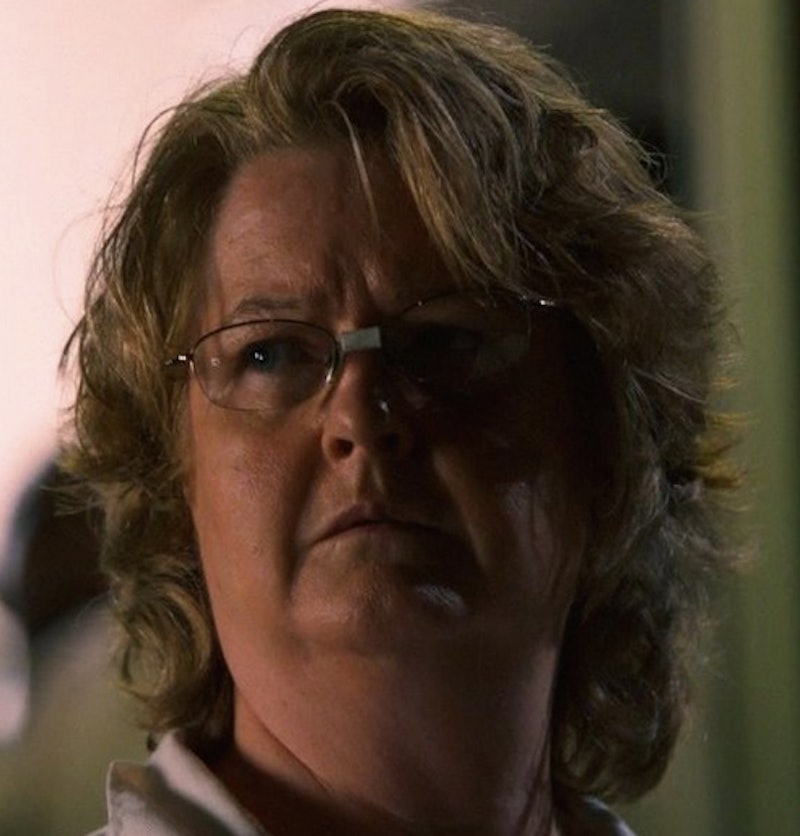 If you have yet to watch HBO's newest drama The Leftovers , go do that immediately. No it's not about food (though the title always makes me hungry). The series, based on a novel of the same name by Tom Perrotta, follows the townsfolk of Mapleton, New York as they struggle to move on three years after The Sudden Departure, a Rapture-like event that results in the disappearance of two percent of the world's population. The series is a grim, yet intriguing piece of television, and one of the most captivating parts is the cult "The Guilty Remnant": A group of individuals who are "Living Reminders of God's Awesome Power." They have taken a vow of silence, stalk people and smoke a lot of cigarettes. But there's one smoker who stands out: Yes, the actress who plays Gladys was also Kathy Geiss from 30 Rock.

Take a good look folks: you know you know that face. She was one of the many hilarious recurring character on Tina Fey's fantastic NBC series. Actress Marceline Hugot played Kathy Geiss, the weird daughter of Don Geiss who takes over as the head of NBC on 30 Rock. Kathy's true loves are unicorns and Mark Wahlberg; she has an affinity for putting things in her mouth; and her appearance on the show always guaranteed laughs.

Though her role on The Leftovers seems far more sinister, we could use some levity after getting through the bleak, existential drama. So without further ago, here are Kathy's (and Marceline's) best moments on 30 Rock:

Kathy Was Basically Mute, Unless There Was Romance Afoot

In order to get Kathy on his good side during her time in charge of GE, Jack tries to seduce her and ultimately ends up pretending to be Liz's lover in a weird soap opera-style romance gone awry. It's weird, but brilliant so just go with it. While Liz and Jack give off some fake sexual tension, Kathy screams for the two to "KISS!" It then spawned one of the best 30 Rock GIFs of all time.

Kathy Is A Secret Diva

Liz is forced to audition way too many people for a spot on TGS With Tracy Jordan and out of the many hilarious people waiting to impress Liz, Pete, and Jack, Kathy Geiss proves to be one of the most memorable when she performs "I Dreamed A Dream" and kills it, Susan Boyle style. We later learn when Don Geiss dies that Kathy has other musical talents: She can play a mean trumpet.

Kathy Tries (And Fails) To Be Like Temple Grandin

In one of her last appearances on the show, Liz references Kathy and a new machine she invented that "hugs old people." The scene then cuts to a demonstration of Kathy's new machine that goes horribly awry, with Kathy standing next to it in a Temple Grandin-style cowboy shirt and jeans. It's grim but ridiculously funny.

This Is How Kathy Relaxes

It's quite a good technique actually.

Kathy and Her Race Car. That is All.

This one doesn't need to be explained. It's just about Kathy and a race car toy.

We miss you, Kathy Geiss, but the silent thing is really working on The Leftovers, too.