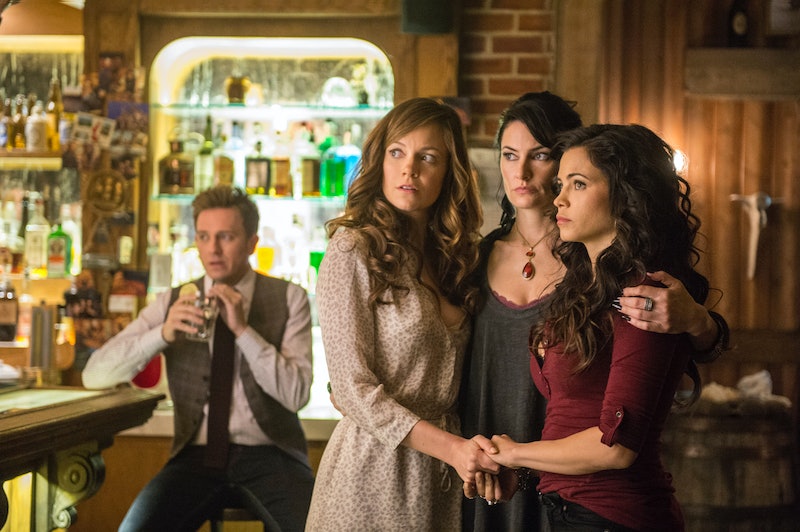 Something wicked is coming. Actually a lot of wicked things are coming when Lifetime's The Witches of East End Season 2 premieres on July 6. Rachel Boston, Julia Ormond, and Jenna Dewan-Tatum have been spilling spoilers left and right about what to expect from the sophomore season of Lifetime's breakout series. And we're excited — like, really excited, even if I'm getting major Buffy the Vampire Slayer vibes from this portal to Asgard that opened up in the East End at the end of Season 1.

So what's up next for the Beauchamp women? After its first season, full of Freddie Prinze Jr. cameos, lots of criminally attractive men, and a love triangle involving Dewan-Tatum's Freya and two brothers, it's hard to imagine that WoEE could get any better than it already is. But, apparently it will and Season 2 will be a lot darker — though I can't imagine anything worse than doppelgänger shape-shifters, a plant that can kill you, and a mother who "borrows" powers from her infant sons. We can take a break to collectively shudder now.

When we left off, Freya's wedding ended up not happening (thankfully), Killian and Dash were revealed to be warlocks, a man disintegrated after holding Ingrid at gunpoint, and an unidentified man walked out of 2014's version of BTVS' hellmouth — the portal to Asgard. And Joanna, Freya, and Ingrid, along with the show's fans, were as shocked as they were afraid. Cue the cliffhanger.

According to Boston, Ormond, and Dewan-Tatum, fans have a lot to look forward to in Season 2 — including a major influx of supernatural creatures creeping up through the portal and more Freya relationship problems. Because being a young and beautiful witch can be so damn hard.

Killian Is Missing & Freya's So Into Him Now

Dewan-Tatum revealed in an interview with the SAG Foundation that she's all about Frillian now, but it's not going to be easy to get that relationship off the ground. Apparently, when WoEE picks up for Season 2, Killian will actually be missing — conveniently after Freya admitted that she was in love with him and told him that he's her soulmate. Awkward. But don't worry, because there will be plenty of this 'ship this season.

Dewan-Tatum told the Foundation, "We can go into past lives and we can have dreams so you kind of get to explore the characters and their relationship through other avenues of doing it rather than just in the present." Well, that sounds promising, because in case you forgot, the Season 1 finale revealed that Killian and Freya had loved each other before.

Frederick's Going To Eff Shit Up

That guy who came strolling out the the portal to Asgard? Well, that's Freya and Ingrid's brother Frederick. Ormond, who plays the Beauchamp matriarch, Joanna, told 680 News, "Frederick is someone who has this tangled, negative past with them, so his coming back brings into their lives from Asgard a character shadowed, veiled in doubt." And no one is happy to see him — probably because he's been chilling in that supernatural world alone all of this time.

Boston, who plays the third Beauchamp lady, Ingrid, revealed to IBTimes that we're going to see a lot of the past this season. The opening of Asgard at the end of Season 1 also opened up a significant, unexplored storyline in the Beauchamp family — what their lives were like before they were banished from their world and how Joanna tried to protect her family. WoEE also has the entire, unexplained story behind Freya and Killian's centuries' old attraction to one another to explain, which, like Dewan-Tatum revealed, will probably come up through visits to the past.

In another Buffy-esque turn, Boston revealed to IBTimes that Ingrid "knows she's the key" to Asgard. Which sounds kind of a lot like Buffy's sister Dawn being the key. Season 2 will have Ingrid struggling to come to terms with the fact that she can't go back now that she knows she's a witch and to trust herself. Boston told the site, "There’s something that comes out of the portal that’s very threatening to her life, and she doesn’t know what it is," and that it's going to be difficult for her former librarian character to work through that.

I don't want to say that this is the most important spoiler of all, but it's definitely the coolest— and Boston totally agrees. During the same interview, IBTimes asked the actress what she was most excited about for Season 2 and apparently, the show's producers have promised that she can fly. So are we talking broomsticks? Or levitation? For WoEE, which seems to have evolved a lot from the witches-on-brooms stereotype, I could see levitation in the cards for Boston's Ingrid — she is a wildly powerful witch, after all.