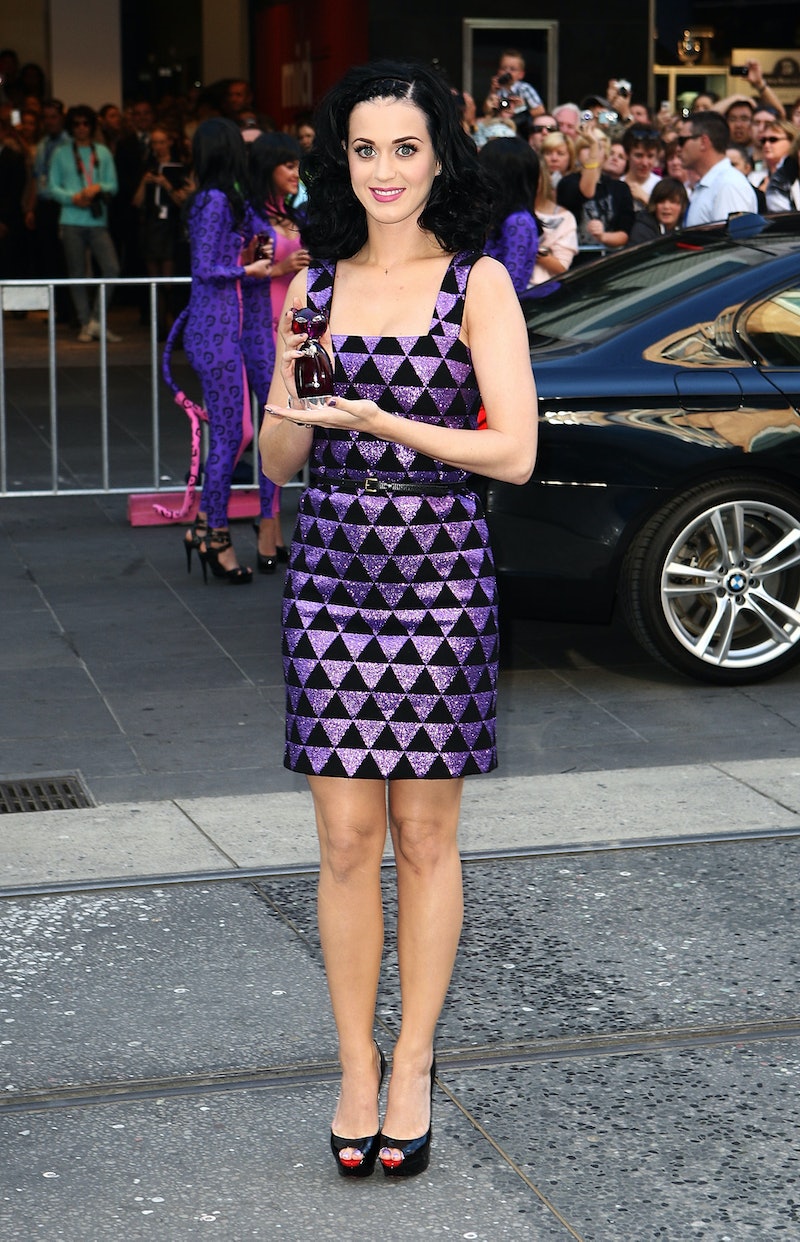 The celeb scent market, which includes everyone from Jay Z to the Olsen Twins, is beyond saturated. It feels like every A lister has his or her own corresponding fragrance. But then there are the Katy Perrys and Nicki Minajs of the world, who have several available auras. How can a fan decide which one to wear or how can they develop fierce and unwavering loyalty for a fave celeb's offering when they have a portfolio of perfumes and new versions flooding the marketing every season? I dunno about you but I am suffering from a case of famous person fragrance fatigue.

It's not the concept that burns me out. I get it — a branded perfume is another revenue stream and marketing endeavor for a celeb and the scents are often released in conjunction with another promo effort or opportunity, like a film or an album. It's the frequency that's wearing me down to a nub.

Perry is following Killer Queen with Royal Revolution, her fourth scent and second regally-themed perfume, after the kitty imagery of Purr and Meow, her first pair of perfumes. Nicki Minaj is offering up Her Minajesty Exotic Edition, a musky and fruity floral variation of one of her perfumes, and will appear on HSN on July 11 to promote it.

The diva of all divas Jennifer Lopez has like 20 different fragrances and multiple variations of her perfume debut Glow, while Britney Spears, adorably pictured above with two of her many scents, and Mariah Carey have more perfume varietals than albums. Taylor Swift often adds to her perfume range, as well.

Even Justin Bieber and One Direction, all dudes who have fanbases that are largely female, launch scent after scent.

It's exhausting, hard to keep up with, and frankly, too much.

Most ladies pride themselves on having their own signature scent, often the result of custom blending different perfumes or by mixing lotion, oil, body wash, and a perfume. The sig secent is one that they always wear and it's hard to have that sort of connection with a celeb scent since marketing teams seem to release one every season.

Sure, I love it when T. Swizzle or Her Minajesty roll up their fancy sleeves, put on some goggles, and visit the labs to offer their opinion on the notes and the aroma as it is being developed. But it's hard to believe they are there at every step with every scent when they have, you know, concerts to put on, albums to record, songs to write, and makeup endorsement photo shoots to pose for, among other things.

It's hard to think that these scents are carefully curated when they are so quickly on the market. And like I said before, you can't be loyal to a scent and make it your signature when constantly bombarded by a new version and pretty new packaging.

While Katy Perry looks lovely in her gold-trimmed attire and while the dagger-like blue bottle is eye-catching, I am not particularly inspired to run out and nab this latest scent from the singer. I applaud her for branding them differently — cats vs. royal court imagery — but it's not even making it to my sniff test, much less getting past it.

I can't argue with the creative packaging of Minaj's perfumes. You get her image and likeness as the bottle, this time with a gold face, a golden wig and a leather bustier for the Exotic Edition of Her Minajesty. At least she is having fun with the bottle, which might look super cool on your vanity or dresser. But what about what's inside?! Therein lies the dilemma. Is it different or exciting enough to get you to plunk down cash when there is still even more ether to wade through?

The smart way to go in the celeb scent world is the Lady Gaga route. Gaga made a splash with her Fame perfume. She has only released one edition and she did so with a bang — the liquid is black in the bottle and morphs into clear once it hits air. Science, bitches! But in all honesty, she hasn't flooded the market with multiple versions, overstimulating the olfactory senses and thus making it hard to decide. She is not offering too many options and too much stimulus and that's smart.

Yes, scents equal lots of cents for famous folks and they are obviously meeting a demand by releasing more and more perfumes, but like reality TV talent shows, this market will hit its carrying capacity sooner than later.

Here's my suggestion for navigating the murky yet sweet-smelling waters of celeb scents.

First, pick a celeb you really like. If you are more of a girl-next-door, then start with someone like Swift. If you are flashy and glam, Minaj is your best bet. Or throw caution to the wind and give yourself a headache by inhaling everything at the counter and pick the one you like best. But before you grab the credit card or cash, spritz whichever scent you like best on your pulse points and walk around for an hour to live with it and decide if you really like it. Then proceed with the act of dropping loot on it.

More like this
The Case For Using Your Fanciest Beauty Products Every Single Day
By Carolyn Steber
Caliray's New Surfproof Setting Spray Is The Ultimate Skin Refresher
By Olivia Rose Rushing
The 13 Best Skin Tints For That Dewy, “Your Skin But Better” Glow
By Olivia Rose Rushing
Pamela Anderson's Most Iconic Makeup & Hairstyle Moments
By Olivia Rose Rushing
Get Even More From Bustle — Sign Up For The Newsletter
From hair trends to relationship advice, our daily newsletter has everything you need to sound like a person who’s on TikTok, even if you aren’t.