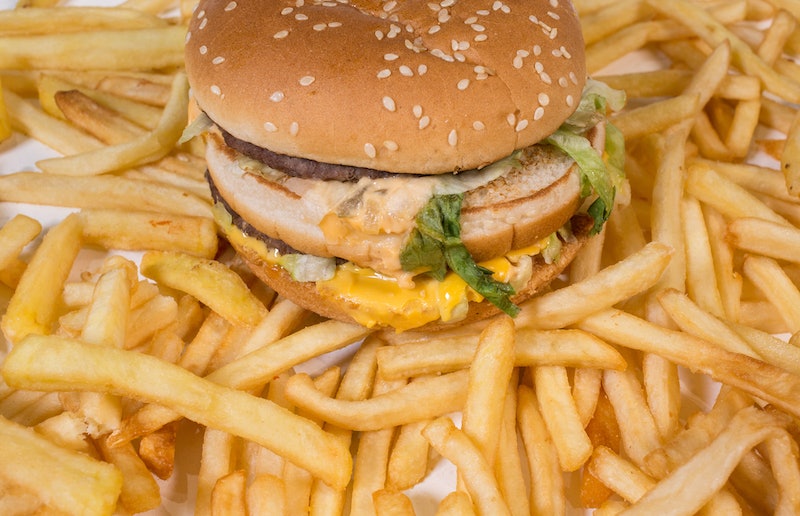 Earlier this week, there was a debate on the Internet over “microcrystalline cellulose”, a.k.a. wood pulp. Yes, wood pulp. According to Quartz, wood pulp is used in fast food as a common filler. However, the way Quartz and various other articles were describing it, you'd think we'd uncovered the latest pink slime or yoga-mat chemical — which is not at all the case.

Often listed under aliases like "powdered cellulose" or "cellulose gum," the ingredient can be found in buns, cheeses and sauces, ice cream, shakes, French fries, and chicken strips. Quartz explains that the ingredient is an “emulsion-stabilizing, cling-improving, anti-caking substance” and a “non-absorbable fiber.” In other words: it’s a just a cheap filler. In terms of who’s using the ingredient, McDonalds ranks highest with 14 menu items that contain “microcrystalline cellulose”. Burger King, Wendy's, Taco Bell, and Carl's Jr. also made the list.

Quartz stresses that the ingredient can have a negative effects on cholesterol, and that studies researching the effects of cellulose are in the works.

But does this really qualify as a "code: pink slime"?

Nah, says both Slate and Refinery29. It doesn't.

In response to Quartz’s article, Slate notes that cellulose really isn’t that bad for you. In fact, it could be good for you. According to About, cellulose is made up of carbon, hydrogen, and oxygen, and can be found in “virtually all plant matter.” The site goes on to explain that not only is cellulose an organic compound, but it is one of the most abundant on the planet. It's also falls under the "dietary fiber" category, which, as Slate clarifies, means it contains zero calories. To summarize, it's a plant-based fiber, and definitely not a big deal.

So chill out! Eating McDonald's french fries doesn't equate to a stomach full of tooth picks. It just means these restaurants are puttling a little more cheap fiber into their mixes. However, before you run back to McDonalds because there's only a little "organic plant matter" in their food, remember: it's still McDonalds.