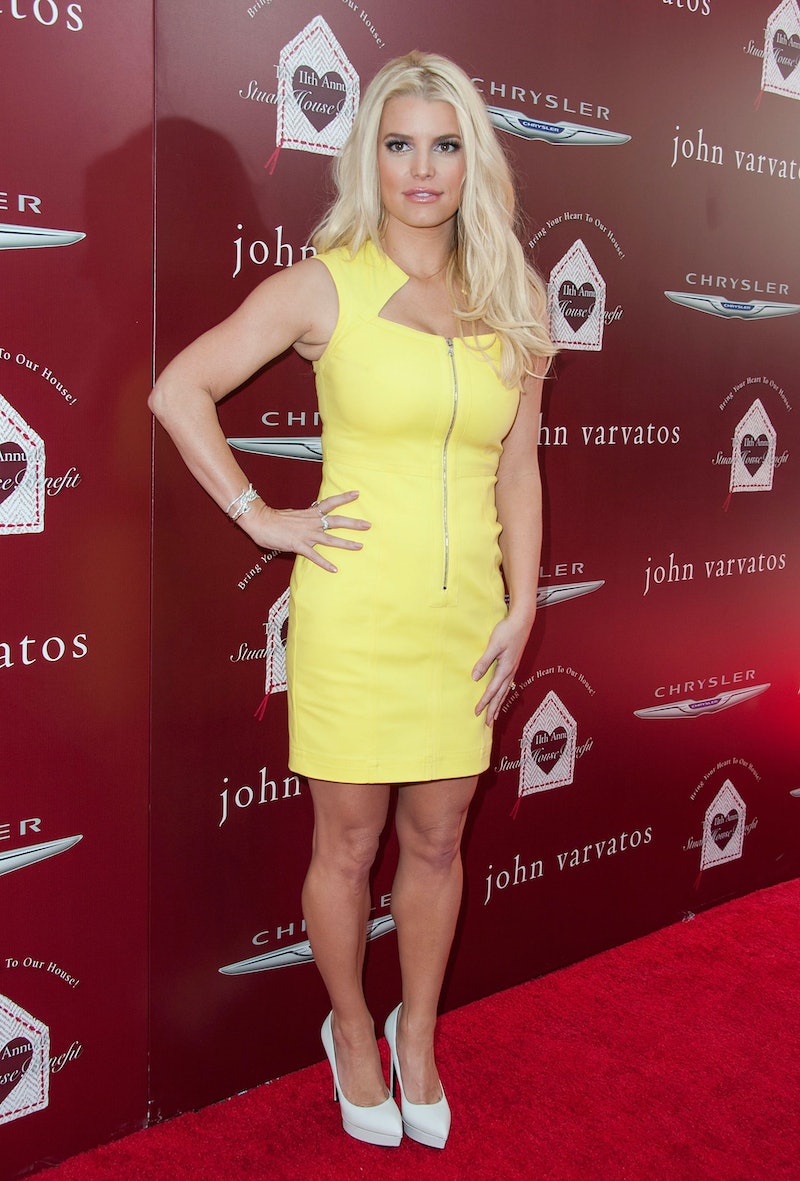 Sources say that Jessica Simpson is marrying Eric Johnson, the ex-NFL-er and father of her two kids, this 4th of July weekend. The singer, actress, designer, Weight Watchers spokeswoman, and beauty mogul is voluptuous and curvy, and her fashion sense has evolved before our very eyes. Seriously, it has! Remember when she was a big-haired Texas cutie with a marginal pop career and then she married Nick Lachey, got a reality show, didn't "get" that tuna is the "Chicken of the Sea?," and became an A-lister? That's pretty much the synopsis of her fame.

While many haters had viewed Simpson as an airhead for her antics on her reality show with Lachey, it did catapult her to superstardom and she sits pretty atop a multi-million dollar empire that includes shoes, bags, apparel, and maternity wear. Suddenly, her canned tuna verbal gaffe isn't such a big joke now is it?

In honor of the fact that Simpson will likely strut her stuff down the aisle this weekend and the fact that she turns 34 next week (July 10), let's have a look at some of Jessica Simpson's most enviable curvy girl ensembles and ones I'd like to copy, shall we?

I've also eradicated and expunged the image of Simpson in "mom jeans" from my memory. That's a fashion misstep from which she recovered gracefully, yet people still discuss it. Here's to hoping these outfits further erase the notion of Simpson-in-unflattering-and-high-waisted-dungarees from your memory!

Simpson capped off this basic LBD with a shoulder embellishment. Everything is bigger in Texas, right? But overall, the clingy fabric hugged those curves.

Simpson is a busty gal but this ruched, ruby dress provided support up top. The cardi was an added cute touch to keep her warm.

This is the body of a woman who had two children in rapid succession. Va-va-va-voom. The color popped against her tawny skin and the zipper detail was so fresh.

Simpson nailed the layered trend with a leopard print dress, topped with a cropped leather jacket and opaque tights, while preggers. This snap was taken in 2011 and this trend is still in vogue today.

Nice stems, Simpson! Her graphic print, mod mini was adorbs but those legs are killer. See a pattern? Short and tight. That's Simpson's style M.O. Notice that her hair was bigger than the dress, though!

This mini was striking because of the seafoam hue and print. Simpson clearly is not afraid of color in her wardrobe and she wore it well.

Simpson channeled a Greek goddess in this one-shoulder black gown. It was deceptively simple and breathtaking in its elegance.

Simpson's metallic silver mini highlighted both her gams and her ample chest, even with a boat neck that kept her cleavage covered up.

10. Perfect in a Pantsuit

Pantsuits aren't for everyone nor are they easy to pull off. Still, Simpson's classic, halter neck, and black romper reminded us that she is a businesswoman and a professional presiding over quite a fashion empire.