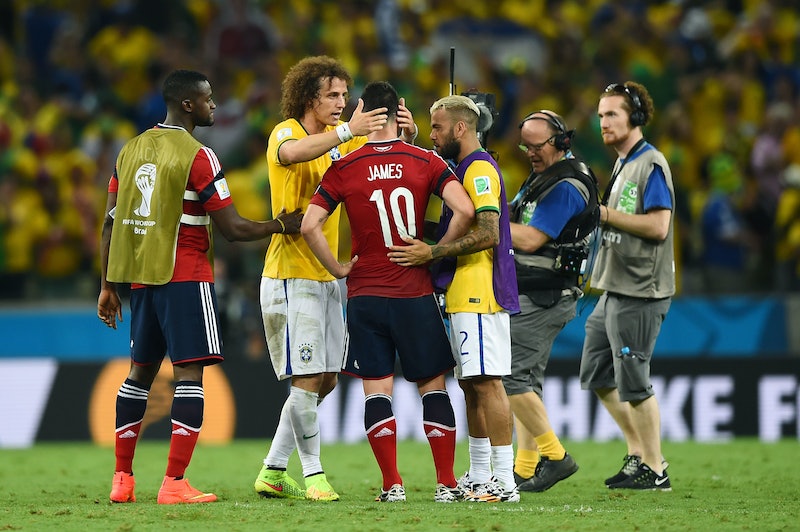 This World Cup story is kind of like The Fox and the Hound but with a happier ending and more shirtlessness. After a fiercely competitive quarterfinal game against Brazil that Colombia lost 2-1, Colombia's James Rodriguez and Brazil's David Luiz traded shirts and hugged in a sweet demonstration of friendship, sportsmanship, and camaraderie that rightfully brought tears to a lot of fans' eyes.

The moment was made all the more bittersweet because Rodriguez, a midfielder for Colombia who goes by his first name on the field (pronunced Hahm-ez), had played well enough during the Cup to emerge as a star so big that he was a very real competitor to Brazilian soccer icon Neymar. He had the most goals of any player in the Cup when Colombia was eliminated Friday, and his disappointment at the loss was palpable when he fell to the turf crying at the game's end.

Despite Neymar's ubiquity as the face of Brazil's Cup, some said the 22-year-old Rodriguez had clearly emerged as the best in the world. Uruguay's coach Oscar Tabarez is one of them, according to ABC News:

Diego Maradona, Lionel Messi, Luis Suarez, James Rodriguez — they do things because they have certain gifts that make them special. I believe (Rodriguez is) the best player at the World Cup.

Without further ado, here is a Vine of Rodriguez and Luiz's post-game love-fest that will surely melt your heart.

Rodriguez currently plays for the club AS Monaco in France, but you can bet he's about to move on up after his performance at this Cup. That reality helped make his tearful walk off the field a bit easier to bear.

Rather unfortunately for us, it appears that Rodriguez, who is being called the "bae of the day" on Twitter at the moment, is happily married and has an adorable child.

Rodriguez also got another friend during the game: A gigantic bug that hung out on his arm for a while. "Even the bugs like James Rodriguez," one Twitter user said while others posted this hard-to-believe Vine. (We are 90 or maybe even 100 percent sure it is real.)

Personally we prefer the Rodriguez-Luiz Hug Vine. Wait, can we watch it again?

Don't worry, James. You won the World Cup of our hearts.