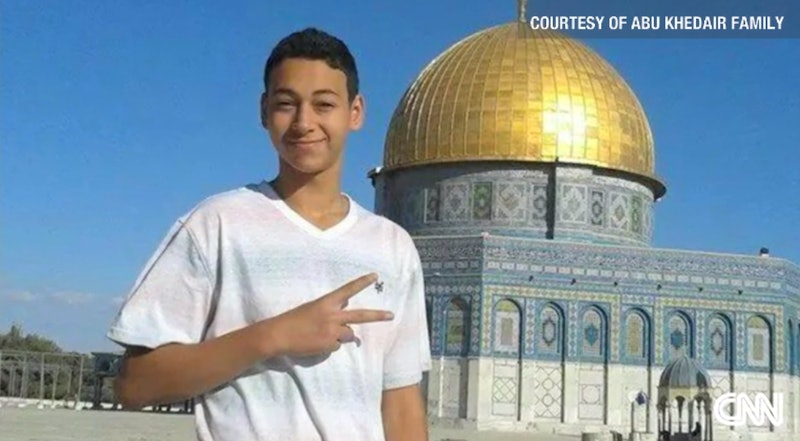 The Palestinian teen beaten by Israeli forces was American Tariq Khdeir, a Floridian born in Baltimore who was arrested earlier this week amid violent clashes in a Bethlehem neighborhood. Khdeir is the cousin of the Palestinian teen Muhammad Abu Khdeir, who was burned alive in an apparent revenge killing earlier in the week.

Tariq Khdeir's beating at the hands of Israeli soldiers was captured on video and has played a part in escalating tensions in Israel-Palestine. Muhammad Abu Khdeir's death is assumed to have been a revenge killing for the deaths of three Israeli teenagers who were kidnapped and murdered in June.

Tariq is 15 and is a high school sophomore in Tampa, Florida, according to CNN. The New York Daily News reports that Tariq was living in Palestine for the summer. He's part of a big family living in the East Jerusalem neighborhood of Shuafat, according to The New York Times.

Though Tariq was arrested, Fox News reports that he was treated at an Israeli hospital. Images of his bruised face were later circulated on social media. The State Department issued a strongly-worded statement on Saturday night questioning Tariq's beating.

We reiterate our grave concern about the increasing violent incidents, and call on all sides to take steps to restore calm and prevent harm to innocents.

It's rare for the U.S. to be so directly involved in a conflict like this, at least on the Palestinian side. Among world powers, the U.S. government has historically offered the staunchest and most unconditional support of Israel.

After news of Muhammad Abu Khdeir's death spread, Israel's Prime Minister, Binyamin Netanyahu, urged Israelis not to escalate the tensions further with revenge attacks, according to The Guardian, which quoted a statement from the the minister's office.

The Prime Minister calls on all sides not to take the law into their own hands and noted that Israel is a nation of laws and everyone must act according to the law.

According to the State Department, Tariq is still being held by Israeli forces but was visited by an American official earlier today.