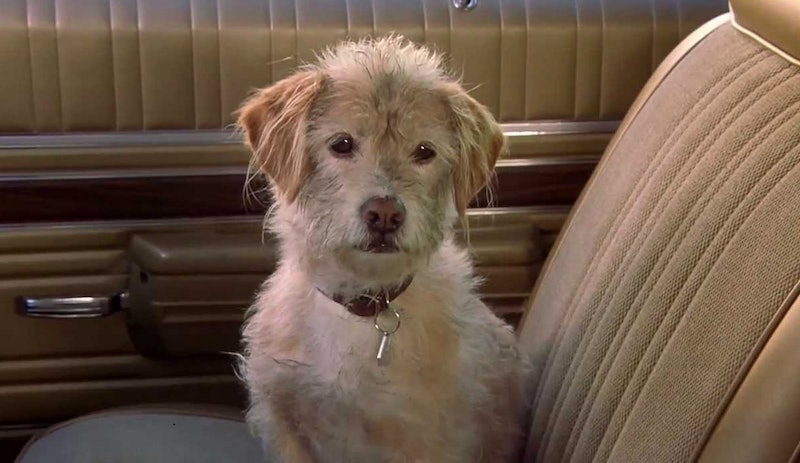 Oh, Baxter! Ron Burgundy’s little gentleman. Who doesn't love the wise, multilingual Border Terrier of Anchorman: The Legend of Ron Burgundy ? (I mean, aside from the bad man who punted Baxter, of course.) In 2004, audiences first laid eyes on the pajama and headgear-wearing pooch, and he just about ran away with the entire movie. Yes, the Anchorman humans are hilarious and fantastic, but how many of 'em eat an entire wheel of cheese and save the news team from a bear? Baxter is on another level. Everything about him has me in a glass case of emotion. Especially his headgear.

So who's the dog responsible for bringing Ron's beloved and heroic sidekick to the big screen in the first Anchorman flick? A canine-spian named Peanut. Peanut did not appear in Anchorman 2: The Legend Continues, however: Sadly, the fuzzy actor passed away in 2010.

The Los Angeles Daily News ran an incredibly sweet obituary for the pooch in which we learn a little more about him: Peanut came from not-so-happy beginnings, but his life was forever changed when animal trainer named Sandra scooped him up from the Los Angeles Animal Services East Valley Shelter years before Anchorman.

Prior to taking on the role of Baxter, Peanut hammed it up in the Universal Studios animal shows. And according to the aforementioned obit, he was "a crowd favorite." UGH, I believe it!

A precious pup named Quince stepped into all four of Peanut's Legend-ary Baxter shoes for 2013’s Anchorman 2: The Legend Continues. Quince's trainer Raymond Beal told The Wire that Quince, like Peanut, is a shelter dog and he was found roaming around a grocery store parking lot. Anchorman 2 was Quince's silver screen debut.

Inspired by Quince and Peanut's stories, Anchorman 2 and Nutrish launched Baxter Burgundy's Scholarship for Classy Dogs back in Dec. 2013. Nutrish pledged to donate one dollar for every new Facebook page "like" to the San Diego Humane Society. I bet that miniature Buddha covered in hair would be honored.

You know that glass case of emotion I mentioned before? Still in it.