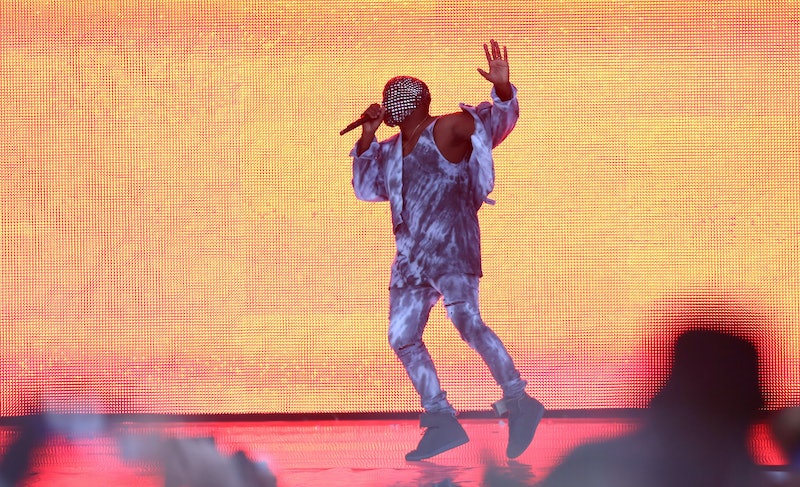 Inevitably, Kanye West has found a way to offend people everywhere, and this time it’s not because he stole a microphone out of someone’s hand (still bitter) or claimed that he was like God and that Kim Kardashian was the modern day Marilyn Monroe. As it turns out, when Kanye West was booed while on stage this weekend, it wasn’t just for the length of his rant but for some of the things he said. In fact, West allegedly compared being followed by the paparazzi to rape, proving that once again, he really doesn’t have a clue.

During his freakishly long one-sided discussion during his set at the Wireless festival in London, West discussed his experience with the paparazzi as well as the empathy he felt for other celebrities.

“I want to bring my family to the movies without 30 motherfuckers following me,” West said. “Everybody here, they like sex right? Sex is great when you and your partner are like ‘Hey, this is what we both want to do.’ But if one of those people don’t want to do that, what is that called? That’s called rape. That is called violation.”

Though I appreciate that the rapper attempted to show compassion for his fellow celebs, and even understand the point he was trying to make, he used the WORST analogy in the history of all analogies. Being chased by the paparazzi is like rape? Seriously?!

Of course, the paparazzi can be excessive and get out of hand, but surely West cannot expect us to weep for him because boohoo he made his way to stardom, is earning millions and has to deal with cameras in his face because of that.

Sometimes I do feel sorry for celebrities who have their privacy invaded because of their fame, and I especially feel bad for their children. Yet at the same time, taking on a role as a public figure in this society is like choosing to open Pandora’s box to the good, the bad and the ugly. I’m not saying I agree with the paparazzi at all, but it’s likely that most celebrities know what they’re signing up for when they become famous.

That doesn’t mean it’s fair. It's not fair that creepy men and women can take pictures of you nude when you're a celebrity or follow you around when you're just shopping or trying to eat. None of it's "fair," but that’s the way it always has been and probably always will be for someone of that status. And if it's really that bad, there are still lawsuits to protect them in certain circumstances.

However, whether a woman or man, people in general (celebrity or not) are not born into this world expecting to be raped. It is by no means a “normal” thing to happen, and should never be tolerated. Ever. As humans, we do not sign on for a life “career” knowing that something potentially horrible like rape could happen to us when we’re out minding our own business.

West's statement was out of line and completely inappropriate.

Unapologetically, sir, but your life is not similar in any way, shape or form to that of a rape victim.

More like this
Kim Kardashian Father’s Day Tribute To Kanye West Called Him “The Best Dad”
By Stephanie Topacio Long
Inside The Wild, Contrived World of Staged Paparazzi Photos
By Tess Garcia
'The Kardashians' Season 2: Will Pete, Tristan, Scott & Kanye Appear On The Show?
By Jake Viswanath
Adele’s All-Female Lineup Includes Kacey Musgraves, Mahalia, & Self Esteem
By Shahed Ezaydi
Get Even More From Bustle — Sign Up For The Newsletter