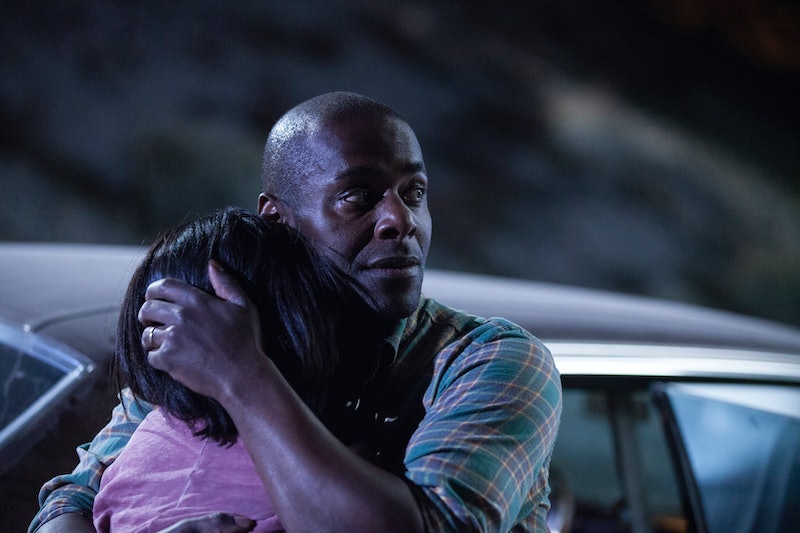 Yes, there is a seeming cult of townspeople wearing white suits and running around stalking people in Mapleton on The Leftovers , but it's Holy Wayne whose mission is far more unclear. The supposed spiritual guru who can "hug the pain away" has already incited the ire of the government by Episode 2 of the bleak, existential new HBO series. And while the violence exhibited against his flock seemed incredibly gratuitous, it does beg the question: Why was the government so hellbent on eradicating his camp and his people?

Sure, Wayne seems like a cult leader. He makes people get rid of their ties and communication devices when they enter his South West compound. He lures senators out to his camp to be cleansed of their guilt by some process we're not made privy to. He seems to have some grasp on the concept that it's simply taking humans longer to catch up to the consequences of the Departure as we watched him get all fiery-eyed and tell Tom Garvey (Chris Zylka) that our time is up, he and the other leftovers have hit the three-year mark since the two percent disappeared on Oct. 14 and now they're all in danger.

At the time, it seemed like the rantings of your typical, grade A lunatic, but with only a bit of time passing between that statement and the violent invasion by a SWAT team, Holy Wayne's ideas start to make a wee bit more sense.

Of course, that doesn't really account for his obsession with Christine, the girl he tells Tom to protect while also insisting that Tom checks his obvious boyish crush as the dusty ranch gate. We know he's got a whole harem of young ladies who sun themselves at his pool, but "She's very important," he says, ominously as if Tom is about to start protecting Leeloo from The Fifth Element.

Unfortunately, the only real explanation we get so far is that Wayne and Christine have a relationship. Whether she's actually the key to easing all of the leftovers' pain or simply the light of Wayne's life and the thing that keeps him going in this apparent impeding war is unclear, though it certainly seems that the latter is the more likely option. That notion gets an even slimier element when Wayne kisses a dead man at the gas station where he and Tom later rendezvous after the attack.

Wayne says "He never would have let me do that when he was alive" shortly before unbuttoning Tom's shirt, taking it, and then attempting to give him whatever his healing hugs are comprised of. Tom balks and says he can't do it, fear and apprehension in his eyes. Wayne may be removing pain, but it seems that he's doing it in a rather sinister way — the notion that Wayne takes intimate moments without permission, even when that person has died, certainly doesn't make Wayne seem very trustworthy.

And for further questions, we've always got the source material to turn to. Spoilers for Tom Perrotta's novel to follow.

In the novel, Tom is pulled in by the romanticism of Wayne's healing hugs, but he later learns that Wayne is a pedophile and someone taking advantage of his followers, just as the rest of us likely assumed. Tom uses another cult to escape from Holy Wayne in the book, meaning this series could become a deeper look into the psychology behind lost people seeking meaning in religion. Cults seem to be the bread and butter of this post-Departure world, but when is a cult a cult? When is a cult a true religion? Or perhaps, even some form of support group? When the world is thrown into disarray, who's to say what's true and good versus what's sick and wrong? After all, even the rapture itself doesn't seem to follow any of the Christian rules we once assumed were the markers of any sort of rapture. How are we to measure any form of faith by the original rubric?

Of course, that's all good and well for the members of the seemingly more legitimate Guilty Remnant, but for Holy Wayne the case is a bit different. Though Christine still believes in Wayne's powers and skills ("It's going to be OK. Wayne told me," she says eerily as Tom looks on in horror), it's clear that Tom is taking at least one foot off of the Wayne train. And seeing as he's a member of the central Garvey family, trusting his instincts over Christine's seems like a pretty good bet at this point.