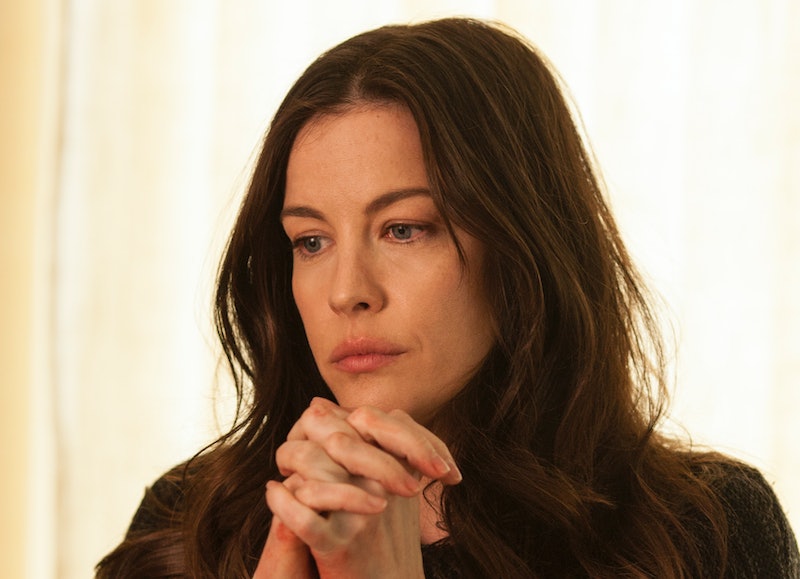 Last week, we were left scratching our heads when The Leftovers introduced The Guilty Remnant, a seeming cult of chain-smoking people in all white. They were stalking average people like Liv Tyler's Meg until those people broke down and joined the GR's mission, which seems to be little more than remembrance at this point. As we saw at the end of Episode 1, the plan worked on Meg, who arrived at the GR moments after a drunk Kevin Garvey left with blood and tears on his face. This week's episode had one glaring mission: Explain why the hell this seemingly average and somewhat fancy suburban woman found the need to give this "cult" a shot. And from where I sit, the series delivered its answer in a big way.

While it was clear that Meg wasn't entirely sure how she ended up at the GR, we do know that she was finding continuing her average existence in a post-Departure world practically impossible. She couldn't wrap her brain around devoting her existence to planning a wedding, or a big party as she seems to view it post-Departure. For Meg, lavish displays have lost a bit of their luster. When the GR offer up a seemingly unattainable solution to a problem that's proved to be impossible for Meg for the past three years, she breaks down and gives it a shot.

Of course, in Episode 2, she gets there and seems unsure about her decision. Amy Brenneman's Laurie Garvey has taken most of her possessions, won't speak to her, and drags her out into the woods and makes her hack away at tree without giving her some sort of purpose or goal. Everything Meg is going through appears arbitrary and unnecessary to us and it's clear that she's starting to question the actions' relevancy as well. Somehow, that doesn't convince her to leave with Kevin when he comes to check on her after her fiance files a missing persons report. But it all comes together later, when we encounter the moment of truth.

When Laurie visits Meg to take one more possession from Meg's suitcase, the new recruit begs to keep her things for just one more day. She then begs of Laurie to remember back to what it was like to hang onto things. Laurie remembers because she once had a family; she communicates this to Meg who exclaims, "The hot cop?" when she figures out that Laurie's husband Kevin.

Sure, that exchange was a moment of levity in a very bleak show, but it's also the moment at which Meg realizes that the GR must have some value if Laurie chose this place over her husband and children. She cries and simply says she "[doesn't] want to feel like this anymore." Cut to a scene of Meg hacking away at the tree she gave up on earlier in the episode when the axe began to give her blisters. She's smiling and crying and exhibiting the first signs of freeing herself from the burden she and many survivors of the Departure have felt since that fateful day. Thud. Thud. Thud. We can't hear the goal that the GR is working towards with each thwack of the axe, but we can tell whatever they're doing is starting to work for Meg.

Just like that, we're forced to wonder: Are all "cults" really something to fear? Could this supposed ramshackle religion actually be the key to dealing with the emotional turmoil of October 14? Perhaps in this world where one of the world's largest religions fails to explain this largely inexplicable event, there is room for new faiths to spring up. And, if Meg's emotional release pitted against Kevin's refusal to acknowledge the GR while his own emotions spiral downward is any indication, this "cult" just might not be as sinister as the word suggests.