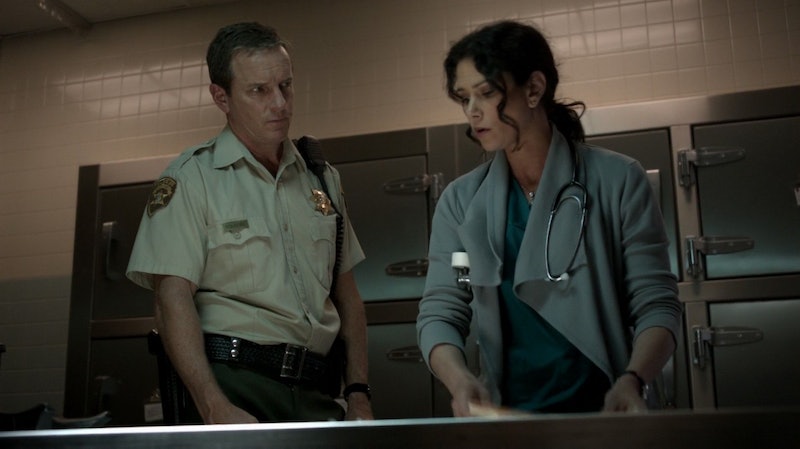 MTV's Teen Wolf has always done a great job balancing action and conflict with some wonderfully authentic teen romance in a fantastical world. I mean, how often do you root for a werewolf to fall in love with a magical fox? Only on Teen Wolf . But the most interesting pairing that has yet to happen on the show is the most obvious of all, the potential romance between the parents of best friends Scott and Stiles. Scott has had his fair share of romance and Stiles is finally dating, but their parents, Melissa McCall and Sheriff John Stilinski are two characters that should really get together.

It's not the most left-field of ideas. Melissa McCall and Sheriff Stilinski both share similarly brave and intelligent qualities and have done a great job raising teenage sons. Each can understand what the other is going through when it comes to dealing with teenage boys and they seem to be the only parents in Beacon Hills that know its supernatural secrets — with the exception of Allison's father Chris Argent. Teen Wolf creator Jeff Davis hasn't said anything definite about these two. so we can keep hoping that the two awesome parents can one day end up together.

Here's why these Teen Wolf adults would make the perfect pair.

They Can Confide In Each Other

Now that both parents know about werewolves, kitsunes, hunters, kanimas and everything in between, they are probably dealing with a lot of stress trying to hide what they know from their co-workers and fellow adults. At least Scott and Stiles have the rest of their "pack" to talk to and solve problems. Melissa and John only have each other. So Teen Wolf writers, how about using this to your advantage and letting the two in-the-know adults actually interact more, confide in each other, and bond over the weirdness of their town? They could both really use a friend their own age right now, perhaps a friend that could potentially turn into something more?

They Work Well Together

John and Melissa have already worked with each other when trying to find out who was making human sacrifices in Season 3. At the time, Melissa knew Scott's secret but the Sheriff was still in the dark. Imagine how well a nurse and a Sheriff could work together in helping their kids track down more supernatural creatures and keeping order in the town without giving away the real dangers?

Pairing Them Up Could Result In Some Great Scott & Stiles Moments

Scott and Stiles have already talked about being more than just best friends: They're brothers. But how would the two react when faced with the idea of this potentially becoming a reality? They both love their parents and each other's parents, so they probably wouldn't be opposed to the two dating. But it could lead to some hilariously awkward moments, especially from Stiles when he comes home to see his dad and Melissa McCall on a date night.

Poor Melissa. She's been raising a son all by herself for quite a while, most of it without the werewolf knowledge. Her ex-husband isn't the greatest man in the world and the last time she went on a date, it was with a man who turned out to be the werewolf that was killing everyone in town. She truly deserves a streak of good luck and if anyone would treat her well, it's Sheriff Stilinski. He's a good man who clearly loved his wife before she died and can understand what Melissa is going through as a fellow single parent.

In the middle of Teen Wolf Season 3, Scott's dad, an FBI agent, came back into town to investigate the human sacrifices being made, as well as to investigate the effectiveness of John's time as Sheriff. He ruffled quite a few feathers in Scott's pack, not to mention annoying Scott with his return. After the murder cases were solved, Agent McCall decided to stay back and try to be a real father for a change, but so far it still doesn't seem like Scott or his mom are really that excited about this. If Melissa were to get on with her life and actually start dating Sheriff Stilinksi, that could lead to some interesting moments between the Sheriff and FBI agent, both because Agent McCall tried to take get John fired and because he clearly still loves his ex-wife.

I don't know about you guys but amidst all the teen angst and the weird new supernatural beasts, I'd love to see some real, adult human conflicts and emotions every now and then.