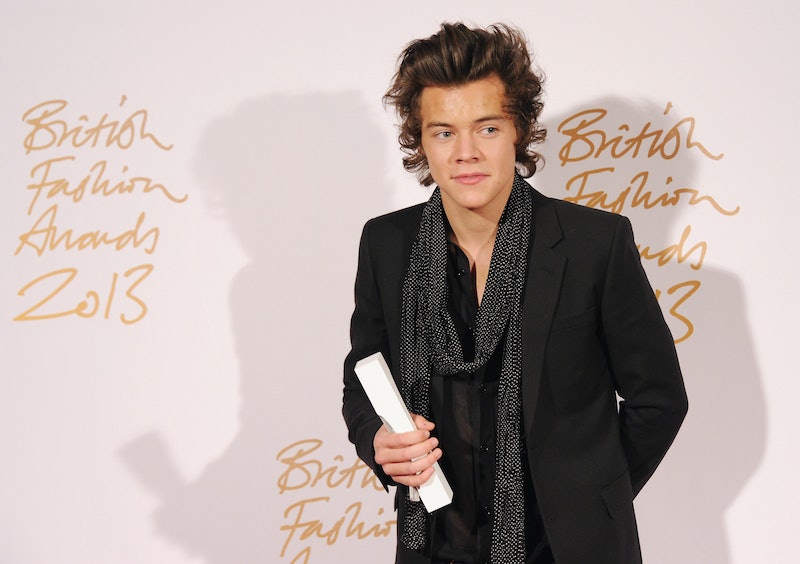 We've gotten a lot of laughs out of the One Direction fandom. Trying to decipher the bizarre trending topics that only seem to make sense to those In the Know is occasionally like putting together a 1,000 piece puzzle of a meaningless picture that leaves you unsure if it was worth the effort of working to see. Then there are the times the One Direction fans start fighting with the Justin Bieber fans, who are probably the second most likely to have an inexplicable trending topic on Twitter. If you caught #HarryDontLickAnything trending Monday morning, this is definitely one of those times when you're going to wish you didn't know. Apparently, Harry Styles favorited a pornographic tweet — something that was made all the more noticeable by the fact that Styles has only favorited about 23 tweets total since he got his account.

Luckily for Styles, most fans seem to think this is some kind of prank or joke. The running joke at the moment seems to be the various ways in which Styles could react to the trending topic than any sort of controversy over why he's making his sexual interests so public. As for how Styles has responded, well, it's quite possible that every celebrity who finds themselves in the midst of a scandal should try the Harry Styles Crisis Management method instead of hiring Olivia Pope. It would certainly be cheaper.

Step 1: Get rid of the evidence.

The NSFW tweet has since been deleted from his favorites, but everything lives forever on the Internet. Although it can no longer be seen on Styles' list of favorites, a simple glance into the #HarryDontLickAnything hashtag will turn it up soon enough. The real question to ask at this point is do you really want to know? Do you? I don't think you do.

Step 3: Turn into a baby angel.

If you want to see what's in Styles' favorites now, prepare to have your heart melted. In place of the naughty tweet, Styles has favorited the cutest animal pictures that it will ever be your pleasure to see on a Monday morning. Because maybe some people don't want to talk about the weather, but everyone wants to look at pictures of puppies and kittens. Don't lie.

Step 4: Remember that you're rich and famous and don't have to say nothin' to nobody.

While we're busy Not Talking About It, now is a good time to remind people of your typically harmless sense of humor. A lunch bag that says I'm a Lunch Bag on it? It's funny because it's true. It's like a knock knock joke, only better.

Step 5: Let the Internet do what it does best.

Why do you need to talk when the Internet is going to do all the talking for you? While #HarryDontLickAnything continues to trend worldwide, the fact still remains that the fans are more amused by all of this than anything else. At least Harry wasn't caught smoking weed like Louis Tomlinson and Zayn Malik.