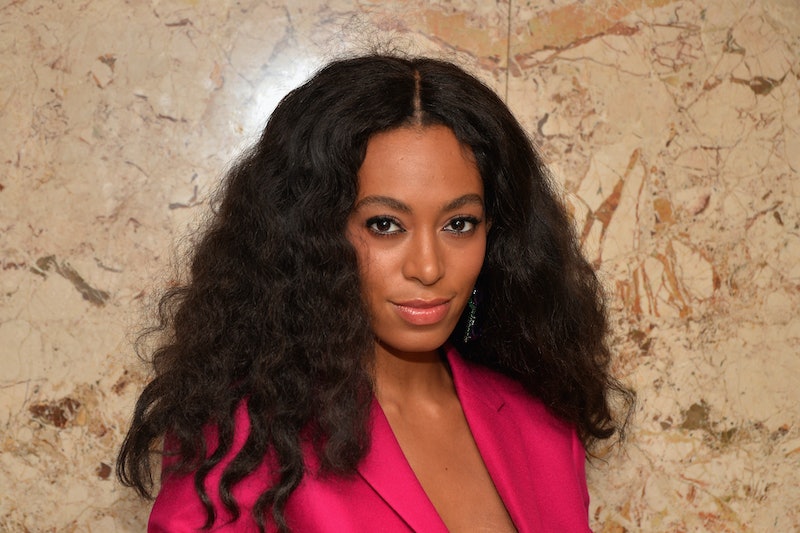 Thanks to Beyoncé's excellent crisis management skills, the infamous Jay Z and Solange elevator fight feels almost like a distant memory. Oh, I'm sure none of us have forgotten about it entirely, but it's not on the tip of everyone's tongue when they talk about Jay Z or Beyoncé anymore. It might still be the first thing people think of when they think of Solange, but, to be honest, that has worked in her favor. Thanks to Elevatorgate, Solange's digital sales have gone up. Maybe that's why Solange is addressing the elevator fight scandal in Lucky magazine instead of just letting it rest.

To be fair to Solange, she was quick to brush the whole thing off. Her statement was brief and dismissive, which is pretty much the best way to phrase something like that when faced with a subject you thought you'd put behind you. Solange seems to no more want to prolong this issue than Beyoncé or Jay Z do. According to US Weekly, Solange merely said, "What's important is that my family and I are all good. What we had to say collectively was in the statement that we put out, and we all feel at peace with that."

However, there's a statement she could have made that would have said the same thing a lot more powerfully: "No comment." Giving Solange the benefit of the doubt that she wasn't speaking about Elevatorgate unprompted, the best way to keep the whole thing out of the public mind, and to stop it from being connected to her name as much as possible, is to refuse to talk about it. As she said, the family already made a statement about the incident to put it to rest. Anyone else asking for further commentary on the matter should only have the joint statement to look at.

By talking about Elevatorgate, even in such dismissive terms as referring to it as "that thing", Solange is re-opening the dialogue on what was said to be a private family issue. She may have thought that she was stomping out the last of the embers, but all she did was light a new fire. It won't be long before it feels almost impossible to talk about Solange without mentioning that she was caught kicking Jay Z in an elevator once.

It's unclear what Solange thought she would accomplish with this statement, but I guess we can't begrudge her the right to put the subject to rest on her own terms. Even if was just a simple, "It's over, see our statement," at least Solange got to talk about Elevatorgate on her own terms and in her own words. The fact that this is the portion of her Lucky magazine interview that people are choosing to focus on is just to be expected, considering the size and scope of the scandal. Hopefully, people buy the magazine to learn more about Solange than just how well she fights in a gown.

And hopefully, this is the last time anyone in the Carter-Knowles family brings up the elevator fight. It kind of makes the joint statement pointless if everyone keeps throwing their two cents in after the fact, doesn't it?