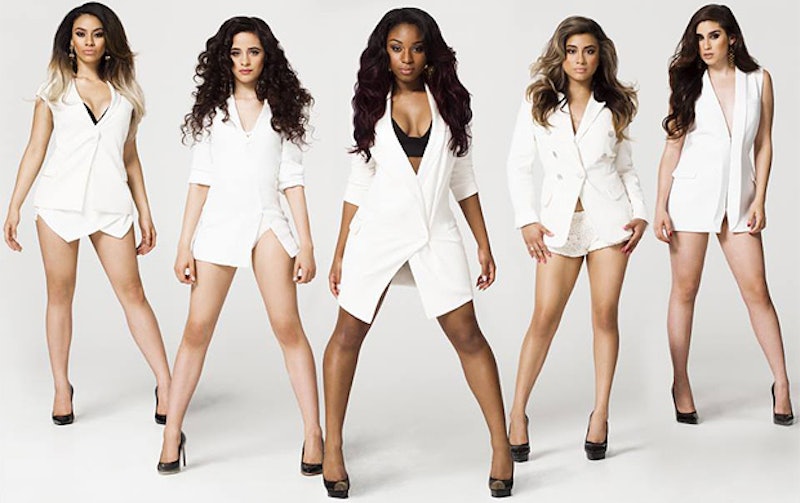 On Saturday, Fifth Harmony premiered their new single, "BO$$," online, and it's... not exactly what I was hoping to hear from the group. The song, which name-drops people ranging from Ray J to Michelle Obama, is fun at first, but it becomes a bit tiresome (luckily, it's less than three minutes long). Admittedly, when 5H teased the song's first verse last month, I was pretty pumped — it sounded strong, sexy, and fresh. And when they debuted the striking single cover last week, I got even more excited to hear the track in full. But when "BO$$" finally arrived, it just kind of... fizzled.

My biggest problem with the song is its lack of a memorable melody. For a group that got their start on X Factor, a singing competition, the women of Fifth Harmony don't do much actual singing on "BO$$." I mean, yeah, there are some nice vocal harmonies and ad-libs here and there, but the track is primarily comprised of silly schoolyard chants about being independent and confident (more on that in a second).

After hearing the ladies talk-sing their way through the first verse, I guess I was just hoping for a more traditional, melodic chorus. Instead, we got these two lines, chanted over and over again: "Boss! Michelle Obama / Purse so heavy, gettin' Oprah dollars." Lame. I realize that they were going for a new sound here, and that's cool, but I don't think they should've sidelined singing — one of their greatest strengths — for what is essentially talking in unison. Anybody can do that.

Which brings me to my next issue with the song: it equates being a confident, independent woman with making lots of money. Oh, is that how that works? Granted, I understand that "BO$$" is a pop song and not a term paper, but I think it's a problematic message for Fifth Harmony to be sending to their listeners (many of whom are young women). I'm fortunate enough to have a lot of confident, independent women in my life, and believe me, nobody's as loaded as Oprah! Sure, making money might be one way to gain some independence and feel good about yourself (at least temporarily), but it's certainly not the only way. Besides, as far as pop music is concerned, that message is a little "been there, done that" by now, don't you think?

Before hearing "BO$$" in full, I was pretty sure that 5H were moving in a more mature, grown-up direction, but the song's "OMG look at me, makin' money!" boasting just makes the whole thing feel rather...childish. Remove the word "ass" from the song, and it's pretty much ready to be featured on the next installment of Kidz Bop.

Whoa. That was way harsh, Tai. OK, I actually don't think that "BO$$" is a bad song. It's fun for what it is — but it could've been a lot more. Don't worry, I'm still a Fifth Harmony fan. I just hope that I like their next offering more than this one.