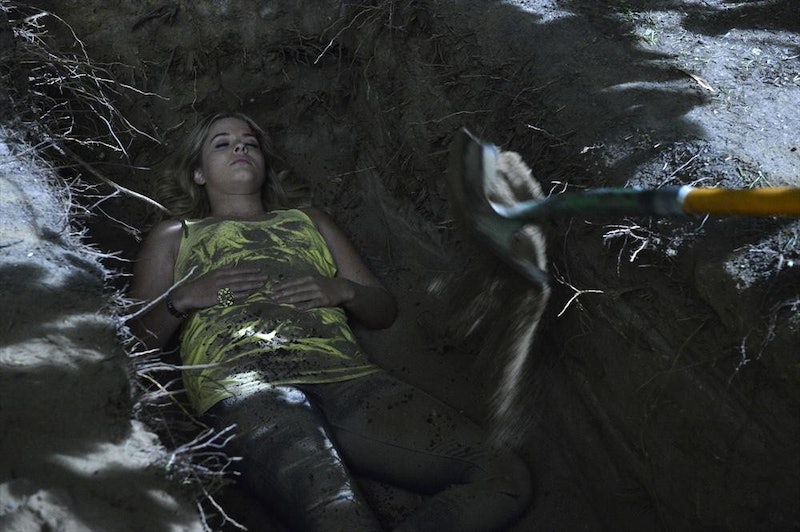 Rosewood is full of buried secrets, both figurative and very, very literal. Perhaps one of the biggest questions we have for Pretty Little Liars is who, exactly, is buried in Alison DiLaurentis' grave? Now that we know that Ali D. is very much alive — and back in Rosewood, no less — we need to know whose body it was buried in her backyard. After all, Ali's allegedly dead body was practically a character in itself — throughout the course of four seasons A stole it, turned its bones into macabre jewelry, and dumped it into an ice bucket on the Halloween train. Now that the body isn't Ali's at alls, it's time to discover whose body it is — and we might find out sooner than later.

According to showrunner I. Marlene King, the 100th episode of Pretty Little Liars "Miss Me x 100" will come with a major reveal. Though King has kept the specific reveal under wraps, my personal favorite buried secret to uncover would be the identity of the girl in Ali's grave. After all, finding out who this girl is will certainly crack open an even wider mystery — why is this girl dead in the first place? Here are a few theories on who the girl in the grave could be, but let's hope we find out for real during the show's 100th episode.

In the Season 4 episode "Who's In The Box?" Emily and Hanna meet up with the friends of a girl who went missing around the same time that Alison did. Given the similarities between Alison and Sara (blonde hair, same height, etc.) Hanna deducts (no, that's not a typo — Hanna really did come up with this theory) that Sara is the dead girl in the grave, and that she was killed as a placeholder for Alison. When one of the friends notes that another one of the girls in their friend group saw Sara the day after Alison went missing, they assume that Sara can't possibly be the girl in the grave... except she still totally could be.

What if one of the friends only thought that she saw Sara, and instead saw another blonde? Mistaken identity is a common theme on Pretty Little Liars — the show could easily bring up this story again and poke holes in the friend's story, revealing that it actually was Sara in that grave.

Okay, okay, I know — the writers have insisted that they won't be doing the twin thing any time soon. As fans may know, Ali had a secret twin in the book series — a plot point that the writers insisted they wouldn't follow into the series. And I almost sort of believe them. The PLL writers are notorious for telling half-truths (they told fans they weren't doing the same thing as the books for the first A reveal — and then revealed A to be Mona all along) and there's always a chance that Ali's twin could make an appearance on the series in a way that's wildly different from the books. Of course, considering that the books had Ali's twin sister in the grave, it's unlikely that the show will pull the same twist — what fun would that be, right?

3. It's The Body From Another Grave

One theory that would cut down on some of the mysteries surrounding the body in the grave? That the person in the grave wasn't murdered, but was simply reburied from another grave. Let's say that a girl around Ali's age died roughly around the time that Ali went missing — someone could have dug up the grave and planted the body in a place where they knew someone would eventually find it, making it look like they just uncovered Ali's murdered body. By doing that, the person who reburied the body would guarantee that someone would stop looking for Alison — and wouldn't have to murder a new person to do so. Given the less-than-observant nature of Rosewood's coroners (seriously? They didn't notice that Ali's alleged body was missing an identifying bone fracture?) it wouldn't be that surprising for them not to notice that they've already seen this body before — especially if it was dressed up to look like Ali. (So creepy.)

4. It's Another DiLaurentis Family Member

This theory actually offers an interesting turn of events: If the person who killed Jason's twin knows that Ali didn't die after the attempted murder, that person could also be the one who has been chasing Ali for the past two years — better known as the elusive A.

More like this
The 'PLL: Original Sin' Creators Say A’s Identity Will Be “Very Clear” By The Season Finale
By Alyssa Lapid
Every Horror Movie Reference In The 'PLL: Original Sin' Premiere
By Alyssa Lapid
‘Squid Game’ Creator Hwang Dong-Hyuk Just Dropped A Major Season 2 Tease
By Brian Anthony Hernandez and Bustle Editors
Everything To Know About 'Evil' Season 4
By Meguire Hennes
Get Even More From Bustle — Sign Up For The Newsletter