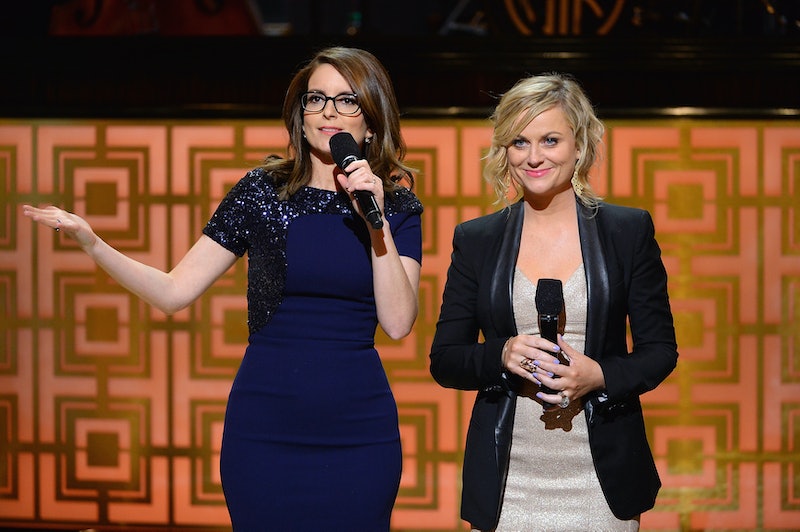 There are a few things in pop culture that everyone, no matter their tastes, can agree on: The Godfather is a great movie; Beyonce runs the world; and the friendship between Tina Fey and Amy Poehler is pretty much the best thing ever. As their years appearing on on Saturday Night Live, making movies, and hosting awards shows together have shown, there is literally nothing the two ladies could do alongside one another that wouldn't be our new favorite thing. Well, except get in a huge fight and stop being friends, but that's never going to happen. Right? RIGHT?!

For most of us, the best examples of Fey and Poehler's friendship have been the recent ones: the hosting gigs, the movies, the guest appearances on each other's shows. Yet while all those things have clearly been great, it makes it seem like the duo have only been friends for a handful of years, when, in truth, they've been attached at the hip since 1993. For those unaware of the comedians' shared past, don't feel left out — we're about to get you up to speed. Below, the complete history of Tina Fey and Amy Poehler's friendship:

In a Chicago improv class, the women meet for the first time. Poehler is drawn to Fey after reading a one-act play Fey wrote about Catherine the Great's views on sleeping with horses (yes, really), and introduces herself. Recalls Poehler, "I thought, 'that lady is hot stuff, I wanna know her.'" Soon, the duo becomes close, starting an improv team together and performing in Second City.

A year earlier, Poehler had moved to New York to perform with the Upright Citizens Brigade, leaving Fey in Chicago. In 1997, though, Fey is hired as a writer for Saturday Night Live, and the duo reunites, performing together in UCB improv shows.

After several years of contemplating auditioning and much begging from Fey, Poehler joins SNL, signing on as a featured player and getting promoted to full cast member soon after. Says Fey, later, in Bossypants: "I remember thinking, 'My friend is here! My friend is here!" At this point, though, Fey is still doing "Weekend Update" with Jimmy Fallon, and she and Poehler don't interact much on-screen.

If you haven't heard of this movie, it's for good reason; except for the cast, very little about it is memorable. Still, there is the cast: Fey, Poehler, David Cross, Andy Richter, Rachel Dratch, and Janeane Garofalo, among others. Although not particularly good, Martin & Orloff did win the 2003 High Times Magazine Stoney Award, so there's that.

This gets an exclamation point, because ten years later, Mean Girls is still the best collaboration the ladies have ever done. Sure, the movie's mostly Fey's film, but what would it be without Poehler's "cool mom?" Thanks in part to her Juicy sweatsuits, boob job, and insistence that teenage sex "keeps me young," Mean Girls is still a classic a decade after its release.

This, though, is where the magic that is Fey and Poehler together becomes most clear. As co-hosts of "Weekend Update" (the first all-women team to do so), they were behind some of the funniest, most memorable moments of SNL history. The now-iconic casting was Fey's doing, as she says she pretty much hired Poehler without Lorne Michaels' consent. We are thankful for this.

In 2008, Fey and Poehler co-star in Baby Mama , a comedy directed and written by another SNL alum, Michael McCullers. Although the movie isn't particularly great, their relaxed, relatable chemistry makes it enjoyable. The film goes on to do moderately well at the box office.

Although she leaves SNL in 2006 for 30 Rock, Fey makes frequent guest appearances, including the now legendary 2008 skit in which she plays Sarah Palin to Poehler's Hillary Clinton. The sketch goes viral, with Fey reprising her Emmy-winning role several times throughout the next few years. None of the appearances, though, are quite as good as the original, where she and Poehler hilariously and perfectly, balance each other's impressions.

30 Rock has been successful for a few years by the time Parks and Recreation premieres in 2009, and while the latter show takes some time to find its groove, it eventually becomes as loved as the former. Thursday nights on NBC are now all about Fey and Poehler, as every night on every network should be.

The trend of funny women writing memoirs starts with Fey's Bossypants , a 2011 book that quickly, and deservedly, became a bestseller. Funny, sweet, and wise, the memoir mentions Fey's love for Poehler often, and never more so than in a chapter entitled "I Don't Care If You Like It (One in a series of love letters to Amy Poehler)." We can only hope that Poehler's upcoming book has a similar concept.

They might have started earlier, but it's only in 2011 that we begin to notice Fey and Poehler hilariously photobombing each other at awards shows and doing other on-screen pranks at the best, most inappropriate times. In a notable event, Poehler plans an elaborate stunt in which she, Fey, and other Best Comedy Actress nominees step on stage, beauty pageant style, at the Emmys.

In a live episode of 30 Rock's sixth season, Poehler appears as the younger version of Fey (trust us, it works) for a brief cameo. It's only a few seconds long, but it's the TV show crossover we've been waiting for. As of 2014, Fey has not yet appeared on Parks & Rec, but we assume that error will be rectified in the show's upcoming final season.

And then came the Golden Globes. In January 2013, Fey and Poehler co-host the awards show for the first time ever, and do it so well ("Meryl Streep has the flu, and I hear she's amazing in it!") that the smart people at NBC decide to make it happen again, and again.

In a move that should inspire magazines everywhere, Entertainment Weekly hires Fey and Poehler to take over one of their December issues. Together, they write a Letter from the Editors, commission pieces on Ellie Kemper and Broad City, and generally make it one of the best issues of the magazine yet.

Sure, it's only a cameo, but Fey and Poehler's appearance together in Anchorman 2 was one of the best things about an otherwise so-so movie.

In April, our dreams came true when Poehler signed on to co-star in Fey's The Nest . The ladies will play thirty-something sisters who, after learning that their childhood home is up for sale, decide to throw a massive party. Little else is known, but who cares? The Nest, like all other things involving Fey and Poehler together and alone, will be great. What more could we want?