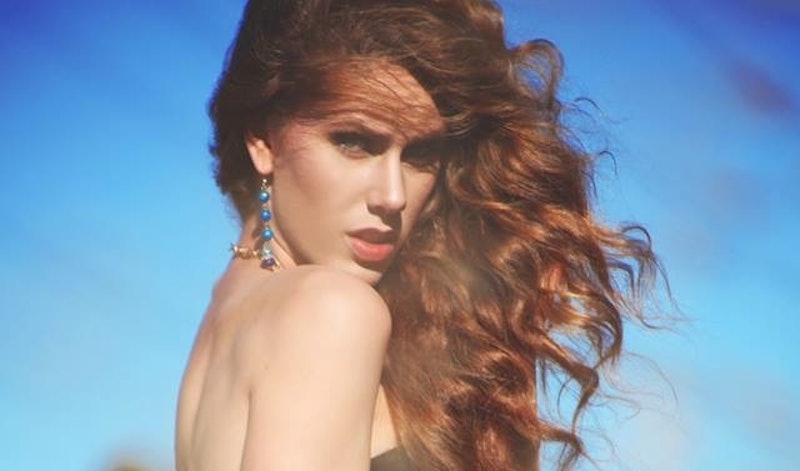 Cassandra Bankson is a model, self-employed beauty guru, passionate anti-bullying advocate, and 21-year-old student whose work is occasionally interrupted by requests from her parents to "pick up Grandma." She's got 694,240 subscribers on YouTube who love her, and a small but nasty group of Internet trolls that won't leave her alone. But Bankson is no untouchable celebrity or two-dimensional Internet personality; she reads the comments, and comments right back.

It doesn't take the trained eye of an agent to realize that Bankson is a stunning girl — enviable hair, fantastic bone structure — but she'll openly tell you and the rest of the interwebs that she suffers from acne and has for quite some time. The acne started in middle school and soon covered up to 90 percent of her face. As a result, Bankson was mercilessly bullied and eventually chose to switch to an independent study model in high school in order to avoid the kids that were tormenting her. While she withdrew from her classmates, she grew interested in skincare and makeup and began posting product reviews in the burgeoning YouTube beauty community. It wasn't until she posted a video of her face without makeup — detailing the foundation process she uses to cover up her acne — that she was catapulted into the public eye. Posting that honest, emotional video was an incredibly brave and public step for a young woman who used to think of herself as the “ugliest person in the world.”

I chatted with Bankson, who lives in California, about skincare, self-love, and, naturally, how to be famous on YouTube.

When did you start getting interested in makeup and skincare?

My mom has never worn makeup — on her wedding day, she wore only eyeliner, blush, lipgloss, and press-on nails — so growing up, I never had that cosmetic experience. I used to put eyeshadow on my face to cover up my acne, which was a huge mess — I thought it was powder. But YouTube was where I began to really learn about makeup. I would go to the drugstore and the dollar store and just experiment; I really fell in love with color. I've always been passionate about skincare — when I was little I would make clay mud masks, even though I totally didn't know what I was doing — so I ended up joining cosmetology school. From there, I learned by a lot of trial and error.

What inspired you to start a YouTube channel of your own?

I was working as a telemarketer, on a telemarketer's budget, and I was so frustrated every time I bought a product that promised to cure everything and make me look and feel amazing — and turned out to be a waste of money. So I'd turn to YouTube to get honest product reviews, and when I first started my own channel, I thought, “This is a community that taught me about makeup, full of amazing, happy people — I want to give back.”

When did you realize you were getting a significant following on YouTube?

It was after I posted my Flawless Foundation video. I was going to upload it and not look at YouTube for — well, forever. I was just going to abandon it and hope that someone else in my situation would be helped by the video. So I posted it, and next thing you know, Good Morning America is calling, someone from a blog in Brazil is writing about it, and for the first time ever, I went on YouTube and saw all of these positive comments.

It was amazing to be overwhelmed with so much acceptance, especially from strangers. I'd always felt very judged, and it was not pretty. This was the first time I'd really felt loved outside of my family, or told that I was beautiful without makeup.

I was struck by how openly vulnerable you were in the foundation video.

Tell me about your first modeling experience.

When I was switching from high school to independent study, a family friend was taking a photography class and needed to shoot some family portraits. I wasn't really into the idea, but he ended up taking some head shots of me, and one of the head shots won Best of Class. I remember being like, “What? Let me see this photo, he's got to be kidding, I'm the ugliest person alive.”

Do you hear from your fans about their own struggles?

Definitely. At first, when people were saying I'd helped them, I thought, “Are they crazy?” It's been therapy for me, in a way; you grow up feeling like there's no one else who understands you, and then you realize that there are people out there who are just as scared and in hiding as you are, and you realize you're not alone.

As far as the issues that my fans are facing, I would have to say self-esteem, self-love, body image, personal image. It's so sad because while I did grow up being very judgmental of myself and my image and my body, I also focused on the things I was told I had as talents. It seems like people today don't value talents or traits or characteristics as much as people used to. The online world is difficult, too, because there's so much negativity. It hurts me, because people have so much more to offer than their looks.

What's your most popular video — and what does that say about your fans?

My most-watched videos are the acne ones, where I show my skin and talk about those issues. People who come to me tend to have problems or issues that they're trying to proactively work through, and I think it's beautiful that we're able to do that together. But a lot of these acne videos get posted on very negative websites. I also get a small percentage of people who troll around on my videos saying negative things. Maybe they've had a bad day?

Speaking of trolls, you went on Anderson Cooper to talk about online bullying. Amazing! How do you deal with trolls and bullies?

It's still very hard for me. I never dealt well with it, even in school. I take things very personally; I want to be best friends with everyone in the world and learn about them even if they don't want to learn about me. I realize not everyone wants to be my friend — I feel like one of those two-year-olds on a playground, or like a kitten, ha. I have to be prepared to read negative comments; I have to have thick skin. The easiest thing for me is just to ignore them and focus on constructive criticism from the people who do support me. It's so stupid how a positive comment can make you feel 2 percent better but a negative comment can make you feel 90 percent worse.

What's a typical workday for you?

On a traditional filming day, I'll research some things the night before and think about what kind of mood I'm in or what people want to see. I usually do research for a couple of weeks prior to filming, in order to find out about the latest fashion trends, or maybe I'll go to the school library and research a skincare issue. Then, I'll put together a video idea in my head. I never really write things out, but I'll think of what I'm planning to talk about. The next morning, I get ready, put on makeup, and then start filming, where I'll talk about what life throws at me, review a product, or discuss something that's interesting to me.

Modeling days are completely different, whether I'm going to a casting, a go-see, a shoot—and then school days are also different, because I'm literally a walking zombie. Also, a lot of the things I do with YouTube involve travel. I'd say I'm gone two to three weeks out of the month.

Is social media a big part of your work?

Social media is a huge aspect, and I think that's the difference between being someone on YouTube and being a celebrity. Celebrities are kind of untouchable, but the beautiful thing about YouTube is showing people that you can still do something exciting and be real, saying, "Look, I have stretch marks, I have acne, I have cellulite." I think that being on Twitter and Facebook, too, helps people understand that you're really there as a friend and not just a personality.

You're 21 and you already have a lot on your plate. Does it ever get overwhelming?

All the time. All the time. That's the other side of doing what you're passionate about — even though I love what I do 24/7, I do feel a lot of pressure, mainly from myself, but also from society, subscribers, haters, brands, friends, and family. I think a lot of it is internal, but I never meet my own expectations because I set them too high. There are days when I have mental breakdowns and can't handle things because I'm being pulled in so many different directions. People tell me to hire help, but I feel like that would be a little inorganic — YouTube didn't start out as a job, it started out as an emotional outlet for me to overcome my insecurities. I feel like if I got help, no one would be able to approach things in the same way. It's definitely a struggle, but it's worth it.

Has your family been supportive of your career? Parents don't always understand the Internet — has it been weird for them?

My parents still don't completely understand it. They'll be like, “Can you go pick up Grandma? Can you help your brother with this?” And I'll be like, “I'm trying to prepare a speech for the National Dermatology Convention.” It's hard being self-employed and balancing personal time. There are weeks where I won't take a single moment for myself, and then I'll end up in the hospital wondering what's wrong — until I realize that I haven't eaten anything but fast food, I haven't taken a shower for days, I have no concept of time, and I've slept maybe 30 minutes.

What new projects are you working on now?

I'm also working on a show with Condé Nast and Allure magazine that will launch in September. In the show, we're giving girls makeovers and a photo shoot, but instead of being superficial, we're showing them how to apply the cosmetics themselves, and we're talking to them about where they come from and where they're going. It's like therapy for them and for me. It was a life-changing experience.

Do you mind sharing a favorite skincare or makeup trick with Bustle readers?

If you want that makeup-without-makeup look, use a primer instead of a foundation. It's like an Instagram filter for your face. It blurs out imperfections, it can even out skin tone, and it just makes everything smooth. I really like Benefits Porefessional Primer. If you feel really self-conscious, just fill in your eyebrows and throw on some mascara and lip gloss.

Any advice for people who want to do what you do?

Do what you love. I have people emailing me and saying, “Cassandra, I want to start a YouTube channel so I can get on TV and become an actress and get free products.” Back before YouTube was a thing, people did it because they had a passion for it.

I probably work a thousand hours a week — I don't sleep — but at the same time, for me, it's not work. People who have an organic passion for whatever they do will do it nonstop. They can't be held down.