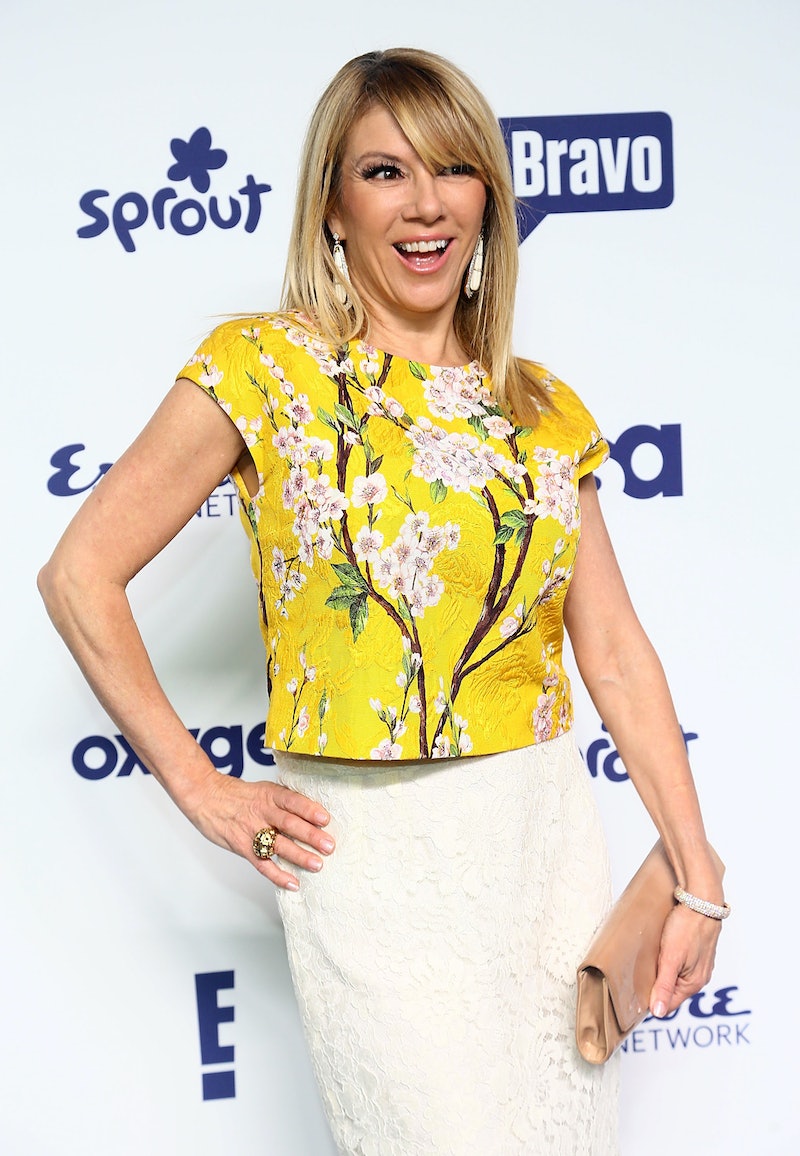 What's that, you say? The Real Housewives of New York City is still on? Yes, indeed. Bravo's second Real Housewives franchise is still kicking, but barely. This season's snoozefest has unsurprisingly been met with series-low ratings. However, it seems like Ramona Singer has brought her usual "Tuuuuurtle Tiiiimmmeee!" antics to the next level, which you would think would make the show even more entertaining than usual. Unfortunately, Singer's behavior this season has been less shocking and more just uncomfortable to watch.

Despite rumors of who is and isn't returning to RHONY next season (if there is a next season), there has been no official word yet from Bravo on who's going to be in the cast. We'll probably have to wait some time before we get that news, but I already think it's time for Singer to pack up her Louis Vuitton suitcase and exit the show for both her sake and ours. It may seem like a RHONY without Singer is one we don't want to see, but all parties involved would probably be better off without her arrogant attitude and foul temper. Here's my totally unsolicited advice for why Bravo shouldn't ask Singer back for Season 7 of RHONY.

It was bad enough that Singer threw water and a wine glass at Kristen Taekman this season, but what's worse is that she didn't understand why she was wrong in doing so. To be fair, Taekman wasn't so great about letting the incident go after things had cooled between her and Singer, but to hear her repeatedly defend throwing the glass at Taekman, and cutting her lip by the way, was just exhausting. We've seen too many arguments where Singer just won't budge on her stance, whether she's right or wrong, and it's just not interesting to watch anymore.

This season, it seemed like nothing could please Singer. She complained the whole way to the Berkshires and high-tailed it out of there the minute she got a chance. She was uber-critical of Aviva Drescher's father's fiancee, who seemed like a nice enough woman, even if she had agreed to marry that horndog. And Singer, of course, complained about going to Montana and then criticized Taekman's hosting skills. For one thing, if she doesn't join the other ladies on trips, it not only lessens the drama, but it is also can be a one-way ticket to getting asked to leave the show. Secondly, with Singer's negative attitude this season, we've lost what was best about her: a woman who liked to have a good time. Who wants to watch someone who can never be pleased?

She's not a good friend

I didn't think it was possible, but there has been a lot of tension between besties Singer and Sonja Morgan this season. While Morgan was certainly not innocent in the exchange, Singer's criticism of Morgan's professional endeavors and financial situation, especially at a party in the Hamptons, were pretty inappropriate. She also meddled in Morgan's relationship with her boy toy du jour by calling his mother, and she probably caused that fling to fizzle sooner than it would have otherwise. If Singer and Morgan's friendship is going to continue like this next season, I'd rather just not see it at all.

She's back with Mario

Watching this season of RHONY, we all know the bubble is about to burst for Singer, who filed for divorce from her husband Mario earlier this year for his alleged infidelity. However, the couple reconciled in April and have made public appearances together since. This is all great news for the Singer family, so I only bring it up to say that if you were hoping her marital issues would bring a lot of interesting drama to the show next season, it seems like things will quickly become all quiet on the Singer front. I'm not saying this is a reason to axe Singer from RHONY, but I don't think it's a reason for her to stay, either. It's also probably best that she works on her personal issues off-screen if she really hopes to repair her marriage.

We always knew Singer didn't really have a filter, but this season it's even more apparent. She bluntly asked about Teichner's fiancee's recently deceased parents at her engagement party, which caused her to burst into tears. In Monday night's episode of RHONY, Singer asks LuAnn de Lesseps if the reason she doesn't want to sing at an event is because there's no auto-tune, referencing de Lesseps' heavily produced single "Money Can't Buy You Class." Singer's stingers were once deliciously catty, but now it's just become hard to connect with her. And if we can't connect with these ladies in some way, what's the point?