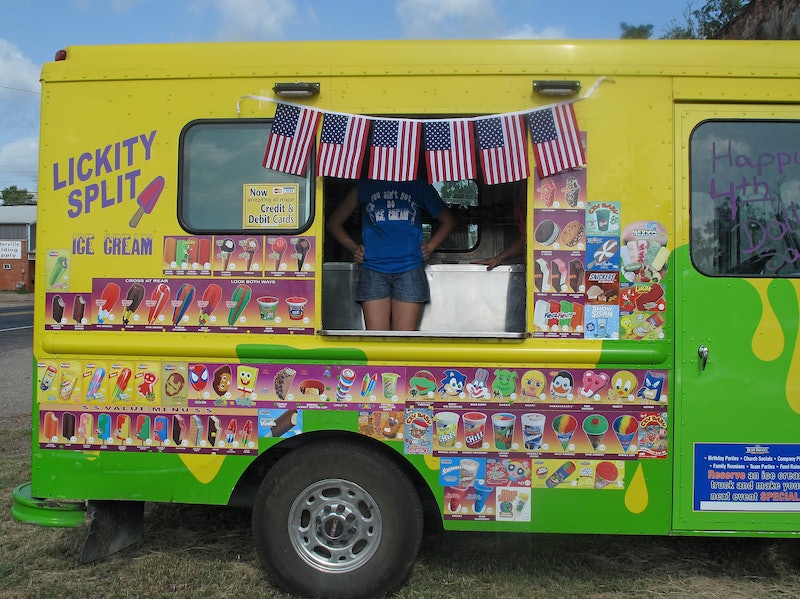 On Monday, I made the extremely poor decision to go take a 45-minute bike ride in what turned out to be 93-degree heat. If I had known exactly how hot it was before I left the house (because of course I neglected to check the weather), I probably would have rethought the idea. I also probably would have made sure that I had some popsicles in the freezer for when I got back.

But not just any popsicles. Oh no. This is shaping up to be one of the hottest summers in recent memory, so it’s time to break out the big guns. I’m talking about all the frozen treats we grew up with: The admittedly bizarre creations shaped like our favorite cartoon characters we used to get from the ice cream truck, the various types of ice pops our parents always kept in the freezer, the tiny little sundae cups all our friends gave out at birthday parties… all of it. Summer time is the best time for nostalgia — and guess what? Not all of the ice-cold delicacies on this list have been discontinued! In fact, a healthy number of them are still around, although they may have taken on a slightly different look in the intervening years. Who’s up for a Throwback Thursday trip to the grocery store? I am, I am!

I remember these tasting way better than regular ice pops, but for the life of me I can’t figure out why. Maybe it was just because it was immensely satisfying to bite Mickey’s head off as he melted. They were discontinued sometime in the early 2000s, according to BuzzFeed, thus depriving subsequent generations of their frozen goodness. Sad, no?

The best part about this offering from Good Humor was the fact that it had (and still has!) a chocolate bar in the middle. To an eight-year-old clutching a buck fifty for the ice cream truck, two treats in one was the ultimate jackpot. The Chocolate Éclair and Strawberry Shortcake varieties were usually worth it, too.

Some people grew up with Otter Pops, while others swear fealty to Fla-Vor-Ice. Either way, though, these brightly colored tubes of icy goodness were just what we needed to cool down on a hot day. And hey, now that we’re older, we can create DIY air conditioners by fastening them to the front of box fans.

Push-Ups still exist, although the Flintstones-themed versions that hit their height in the ‘90s seem to have gone the way of the dinosaur. I was never a huge sherbet fan, but it’s kind of hard to resist when you’re pushing it out of a cardboard tube decorated with some of your favorite cartoon characters.

Oh, and about that really bad dinosaur joke:

I’m not sure exactly what Screwballs are made of; they seem to be closer to Italian ice than ice cream, but somehow I’m not positive they’re really either. Maybe they’re both at the same time? Whatever. In any event, when we were kids, Screwballs were exciting for the same reason that Candy Center Crunch Bars were: They had an additional treat at the bottom in the form of a gumball or two. They made their original debut in the ‘70s and they’re still around today, so clearly it’s a gimmick that works.

Ice cream bars shaped like the Ninja Turtles, Sonic the Hedgehog, or any number of other fictional characters with gumball eyes were, and continue to be, among some of the most popular ice cream truck treats around. I don’t think anybody actually liked the gumballs their eyes were made of (which I believe were the same ones waiting for us at the bottoms of Screwballs), but that didn’t matter. It was the principal of the thing.

Italian Ice held the dubious honor of being the thing our parents occasionally made us get from the ice cream truck under the guise that it was somehow less bad for us than everything else. This is true for a calorie perspective — each little cup of the Marino’s brand stuff I grew up with maxed out at 100 calories — although at 24 grams of sugar a pop, let’s not kid ourselves too much. They might not have been as exciting as ice cream shaped like Leonardo, but at least they took ages to finish. There’s only so much rock-hard, mildly flavored ice you can scoop up at a time on those little wooden stick things.

There are a huge variety of companies that manufacture these kinds of ice cream cups, so you probably have your own favorite from your childhood. Me? I grew up mostly on Hoodsie Cups, and weirdly enough (given that I was a chocolate fiend as a kid), I preferred the strawberry ones over the chocolate ones. Anyone else? Just me? OK then.

These? Oh man. These. They were definitely one of my repeatedly-purchased favorites. There was something about the meltiness of the ice cream and fudge and the crunchiness of the ice cream cone “taco shell” that just created this perfect textural masterpiece in your mouth. I might have to head to Target this weekend to pick up a box for nostalgia’s sake — or maybe I’ll just try making them myself.

In the grand scheme of chocolate-flavored treats on sticks, there were Fudgsicles… and then there were the vastly superior Jell-O Pudding Pops. These babies sadly vanished from shelves in the mid- to late-‘90s. They returned for a hot second in 2004, only to disappear again shortly thereafter, leaving us with more questions than answers. What happened to these almighty frozen warriors? Did they depart for the icy tundra of their homeland? We may never know.

More like this
Lindsay Lohan & Jonathan Bennett Celebrated Mean Girls Day Very Differently
By Jake Viswanath
20 Photos Of The 'Hocus Pocus' Cast Then & Now
By Radhika Menon
24 Years Ago, 'Friends' Dropped Its Most Underrated Ross & Rachel Episode
By Grace Wehniainen
The Chicest ’90s Updo Hairstyles To Try
By Paris Giles
Get Even More From Bustle — Sign Up For The Newsletter