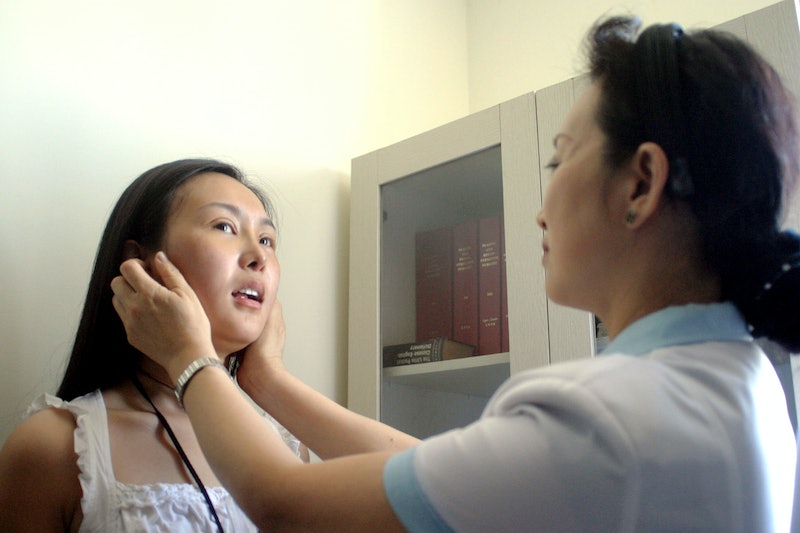 What would you do to get your dream job? Would you get the bones in your legs broken and stretched on a rack?

Government bans on leg-lengthening surgery can’t deter Chinese men and women who hope an extra inch or two will give them an edge on a competitive job market. Other popular cosmetic procedures include rhinoplasty, double eyelid surgery and human placenta injections for weight loss.

China has one of the highest rates of per capita plastic surgery in the world, with the vast majority of procedures being performed on women. After interviewing dozens of patients and analyzing media reports, the anthropologist Wen Hua (author of Buying Beauty: Cosmetic Surgery in China) concluded that women in Beijing seek out plastic surgery not for vanity’s sake but because they believe it will enhance their job prospects.

“Cosmetic surgery has become a form of consumer choice,” Hua told The Daily Beast . “The dramatic economic, cultural and political changes in China have produced immense anxiety experienced by women, which stimulates the belief that beauty is capital.”

The link between beauty and earning potential is not exactly unique to China. In the 1990s, American economists Daniel Hamermesh and Jeff Biddle found that attractive people have an edge at every step of the hiring process, from scoring an interview to climbing the corporate ladder. They even quantified the “beauty premium”, concluding that good looks increase hourly income by an average of about three to four percent. Another study found that the CEOs of successful companies were rated as more attractive than CEOs of smaller, less profitable businesses.

But the connection between looks and wages may be stronger in Asian countries such as China and South Korea, where job seekers are expected to include headshots on their resumes. A 2003 review of job advertisements in China found that 90 percent of positions open to women were only open to women under 30; other jobs have minimum height requirements. One of China’s biggest airlines made headlines recently for raising the age cap on female flight attendants from 35 to 45.

Many of the Korean women I spoke to also cited improving job prospects as a key factor in their decision to undergo plastic surgery.

“Women’s appearance is a really important factor in job interviews,” one woman, a teacher, told me.

“The appearance of a woman is more important in getting jobs,” agreed Dr. Hee Moon Lee, a surgeon at Eye Magic Aesthetic in Seoul.

Beauty has always been sought after, but using surgery to enhance it is a relatively recent phenomenon. The field of cosmetic surgery only emerged around the turn of the twentieth century, when American and European surgeons began experimenting with ways to address “saddle-nose” (a deformity of the nose made common by syphilis). It gained momentum as surgeons developed novel techniques to treat World War I soldiers injured by new weapons, and also found psychological justification in Alfred Adler’s idea of the “inferiority complex”— that feelings of inadequacy, including those related to physical appearance, could interfere with a person’s happiness and productivity.

The most popular cosmetic surgical procedures around the world today are liposuction, breast augmentation, blepharoplasty (surgical modification of the eyelid), rhinoplasty and abdominoplasty. Popular nonsurgical procedures include injections of Botox and Hyaluronic Acid fillers such as Restylane and Juvederm. The largest markets for plastic surgery can be found in the US, Brazil, China and South Korea.

Because the modern phenomenon of cosmetic surgery highlights the intersection of issues like race, gender, beauty, technology and globalization, we found ourselves in a plastic surgery reading rabbit hole. We figured we'd share; below, a few more of the most interesting plastic surgery reads from around the web:

More like this
Meet The Spice Company Founder Who Sees Chai As A Metaphor
By Madhuri Sathish-Van Atta
17 Dermatologist-Recommended Skin Care Products Under $20
By Audrey Noble
25 Quotes About Love To Share During Pride Month 2022
By Madeleine Aggeler and Emma Garza
How To See The Lunar Eclipse On May 15-16, 2022
By Kaitlyn Wylde
Get Even More From Bustle — Sign Up For The Newsletter