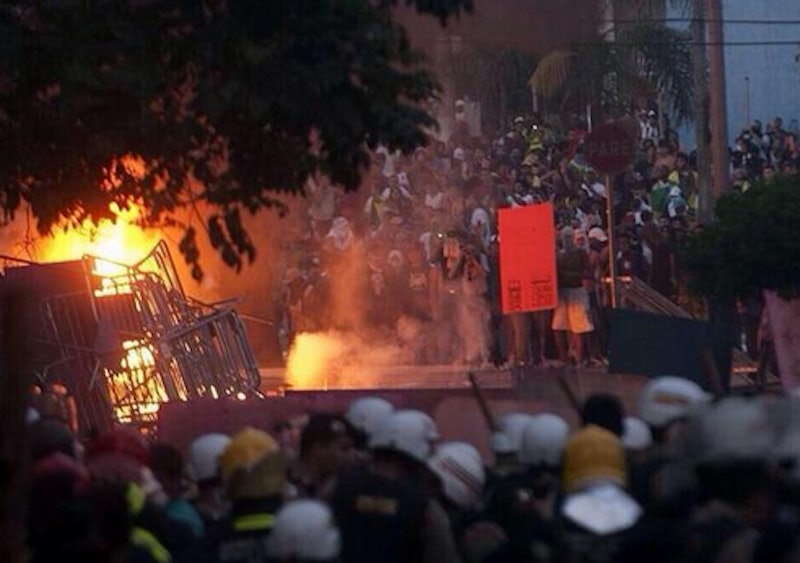 Um, no, those extremely violent "Brazil riot" photos on Twitter aren't from Tuesday's loss to Germany. Gizmodo's Factually blog points out that one of the photos going around, which shows a violent scene swarmed by riot police with a blaze in the background, are actually from 2013 riots protesting the then-forthcoming World Cup. So stop retweeting them!

Here's how to Tweet safely in these types of situations: If you're ever wondering where a photo came from, there's an easy way to check, as we pointed out over the weekend after American Apparel reblogged a photo to their Tumblr of "fireworks" that actually showed the space shuttle Challenger disaster. Just drag and drop it into the search bar over at Google Images, and you should be able to track down the original.

Still, despite the fake photos, there was some unrest in Brazil on Tuesday night following the loss. Viewers on a very crowded Copacabana Beach fled when a sound like gunshots rent the air, according to several reports cited by London's Mirror. But the gunshots were apparently unrelated to the loss and actually had to do with a theft on the beach, according to Lance Santos, a sports reporter who chronicled what happened on Twitter.

Riot police flooded the stadium during halftime to prepare for the aftermath of the team's dramatic and record-breaking loss to Germany, whose team scored five of its seven goals within 18 minutes in the game's first half.

German fans had to be escorted out of the stadium following Brazil's dramatic loss. Here's a look at the riot police who were lined up in the stadium to keep order after the game.

So the country was definitely prepared to have emotions running high in the game's aftermath.

But several members of Brazil's team — including defender David Luiz, goalie Julio Cesar, and coach Luiz Felipe Scolari — apologized to Brazil for the loss and took some measure of responsibility for it, Scolari particularly, as he said in a news conference after the loss:

... The choice, who decided the tactical line-up, the way to play? I did, so the results and the person responsible is me.

Despite the fake riot reports, people do have good reason to believe that sometimes major, emotional losses are followed by problems with riots and violence. It happens after big sporting events all the time — so much so that there's a whole Wikipedia page dedicated to the phenomenon — and it's happened after plenty of World Cup games. One of the most dramatic examples occurred in Colombia in 1994, when a player accidentally scored for the other side during a match against the U.S.

That player, defender Andres Escobar, was later tragically murdered in a parking lot outside a bar.