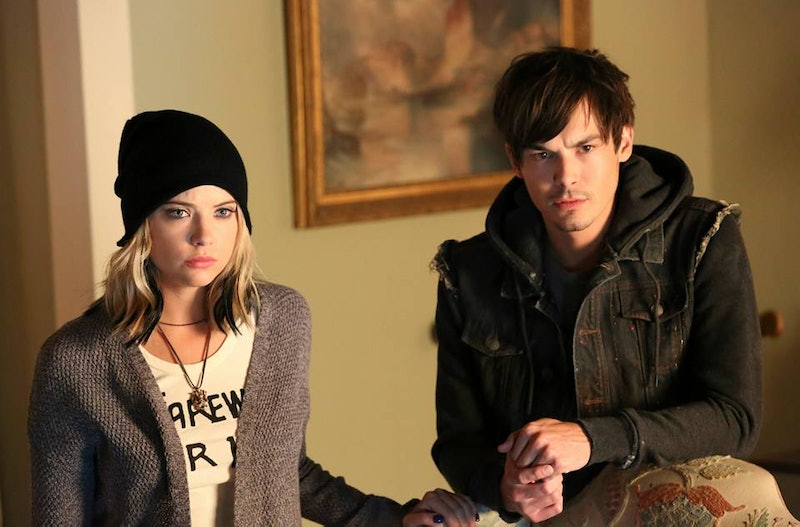 Travis who? We all knew this day was coming, but we didn't know how hard the feels would hit us. On Tuesday night, ABC Family aired Pretty Little Liars ' 100th episode, and Caleb Rivers is back, people. And while some of us at Bustle were on the fence about whether or not Hanna and Caleb should get back together, the 100th episode, "Miss Me x 100," basically assured PLL fans that they will. Don't start 'shipping Hanna and Travis too hard just yet because Caleb's long locks might be gone, but he's still got a hold on Hanna's heart.

First, take a moment to check out that ultimate grunge couple in the above photo — between Hanna's new black hair to Caleb's cutoff denim vest, Haleb is a match made in heaven. But anyway, on Tuesday night's episode of PLL, while the focus should've been on Alison's struggles with returning to school, I was more concerned about Hanna. Particularly about how she reacted to Caleb's return and what it means that they, once again, witnessed one of "A"'s acts of terror.

Hanna was clearly taken off guard when she ran into Caleb at the Brew, and Caleb was taken off guard when he saw that she might've moved on with hot coffee-drinking Travis. (I'm skeptical, too — iced coffee all the way.) And, naturally she was pissed that he didn't call because they were in love and, even though she had a minor breakdown, they ended up parting on good, mature terms. So what the hell, Caleb? But either way, they're getting back together because they're both absolutely still in love.

Caleb's reaction to seeing Hanna buying coffee for a guy and Hanna getting completely obliterated and calling him over and over at Lucas's party is enough to convince anyone, even a naysayer, that we're going to see a Haleb reunion in PLL season 5. Add to that the fact that he understands Hanna better than anyone else (he straight-up knew that she'd dyed her hair because of Alison) and that PLL had them bear witness, together, to another one of "A"'s attacks all means one thing: They're getting back together.

PLL's relationship all share a similar vein at this point, they're all fueled by the pair's involvement in "A"'s reign of terror and Travis really hasn't earned his place. So get ready to roll out the welcome mat for Caleb Rivers because Haleb is so back on.