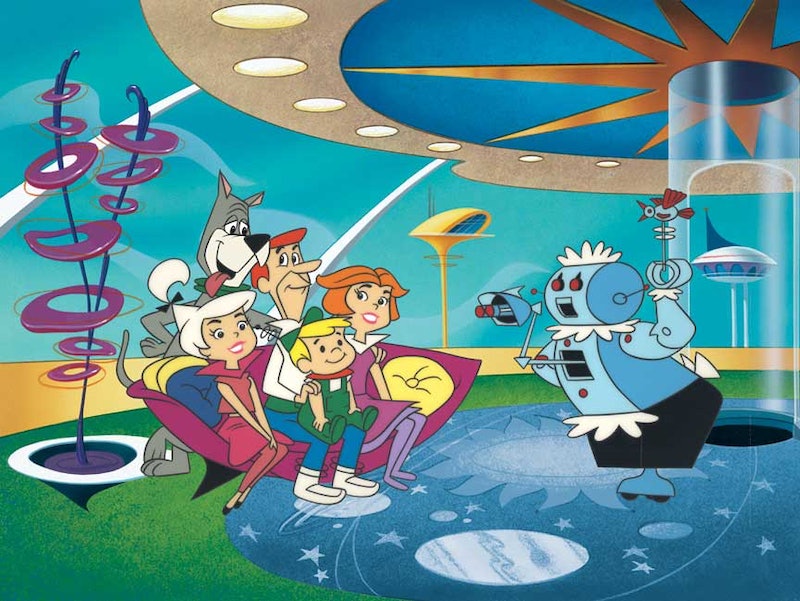 In case you missed the memo, we're officially living in the future. There may not be many flying cars (yet), but technology is advancing so fast that everything is getting to be high tech — including our homes. "Smart" home systems are all the rage, with Google, Wink, and Apple investing heavily in tech that will connect every item in your home to a central operating app. One day soon, you'll be able to adjust your thermostat, start cooking dinner, and feed your fish from your mobile or Tablet — even if you're not actually home.

But smart homes are just the tip of the iceberg. Technology is impacting every aspect of our living experience, from entertainment to sleeping. You think smart fridges that connect to the Internet aren't exciting enough? Then how about bacteria-detecting shelves that can tell you when food goes moldy, or lamps that clean the air, or perhaps a washing machine that can tell you when in the day energy prices are cheapest? It sounds like something out of The Jetsons, but they're all real products.

Here are the top products — from the insanely useful to the, well, just insane — which represent the sci-fi future of our homes. Most are either still in beta or cost more than a small car, but one day soon, they might be standard IKEA fare. (Unfortunately, nobody's produced Rosie the Robot yet, but maybe soon.) In the meantime, here's what you can look forward to.

Sleeping isn't just for the exhausted any more. The Hi-Can (left), or high-fidelity canopy, fits around your own bed and has its own built-in multimedia system, PC, movie screen, and reading lights.

But as far as sleep technology goes, that's just baby stuff. How about the truly spectacular-looking Tranquility Pod (right), which blocks out 90 percent of exterior noise and links up an LED display to your heart rate? (Possibly not so tranquil.) Or the SleepNumber x12 mattress system, which can do virtually everything: It tracks your restlessness and breathing in the night, responds to your voice, and can even lift up a partner who's snoring.

Boring old appliances — or are they? Preserving and cooking food takes up a lot of energy, particularly if you keep opening the fridge to see what's inside. (Guilty.) But a lot of cutting-edge fridges allow you to see the contents without wasting energy by opening the door. The Vestel Assist (left) does it all via a control panel, plus it lets you adjust temperatures on all your kitchen devices and even access a recipe list. Mega-fancy.

Internet-connected fridges like Electrolux's Infinity I-Kitchen (right) are now basically commonplace (though the open source tablet on the I-Kitchen can look up recipes and control the fridge's settings.) More interesting is their proposed Food Symphony, which has "smart glass" that changes from clear to opaque if you're not using it and has bacteria sensors to pick up when food is going bad.

But the best bit is in ovens — imagine being able to start cooking your meal and adjusting temperatures when you're still miles away. Connect IO Intelligent Ovens and GE's app-enabled wall ovens can both be controlled via smartphone — and GE's actually has USDA-recommended cooking temps for different meals programmed in.

The 'Nest' thermostat is currently getting all the love. It's a smart thermostat from Google and does any manner of fancy things, from learning your preferred temperatures to automatically lowering temps when you're out of the house. Plus, it's designed to start linking to many other Apple house products: It's the hub of Apple's "smart home" system. If you're in a hotter part of the world, there's the splendidly named Friedrich Kuhl A/C (pictured) that can be controlled via smartphone. So many points for the unintentional pun.

Smoke detectors aren't just shrill annoyances any more. There are now systems, like the Insteon Smoke Bridge and Birdi, that monitor air quality, can send texts and emails to warn of smoke levels, or (in the case of Birdi) actually call emergency services for you.

And the bird metaphor continues with security apps — the biggest hit has been the Canary, (pictured above) which monitors the rhythms of your home and can give you notifications — and an HD video — of anything out of the ordinary. That's if any burglars get past your Camelot Touchscreen Deadbolt, a bolt that unlocks with a punched-in code that can be set up to your smartphone or Tablet. And you can hum the James Bond theme as you do it!

Washing machines may seem like a very unglamorous part of daily life, but they perk up a bit when you contemplate the Samsung WW9000, which can be hooked up to your mobile to be adjusted remotely, or the amazingly sensible Whirlpool 6th Sense Live. Along with smartphone controls, this washing machine actually has a link to a database of energy prices, so you can pick the cheapest part of the day to do your spin cycle. Let that one sink in.

Bathing, however, is sci-fi glam all the way. Will you choose an Arc shower (left), which recycles warm water to lower energy use, or the frightening-looking I-sopod (right), a bath/float tank with its own LED light show and mp3 audio system? Ridley Scott probably has four.

Interior decorating in the future is going to be all about showing off your tech — or hiding it. A huge touchscreen tablet in a coffee table, for instance, might be for the former preference. Philippe Stark's My World couch (pictured above), which can discreetly charge devices while you're lounging, is for the latter. And a Scorpion workstation, with three LED screens and air filtration, might just be for people who want to look like warlords.

Smart lighting is getting complex, too. Philips' Hue collection has customizable light bulbs and a wireless bridge that allows users to control them from an app. And the Lula Lung Lamp (pictured above) connects to the Internet to monitor air quality — a particular boon for asthma sufferers.

Mercedes-Benz has announced that it's working with Apple's Nest to produce a smart garage app that will "react" to your estimated time of arrival by opening garage doors and adjusting the thermostat. But there are other, more rarefied things in the pipeline — like HGTV's Smart Home pool filtering system, which can be controlled via smartphone.

Or, of course, there's a window-cleaning robot (pictured above). Yes, really.

Now if we could just afford a home...