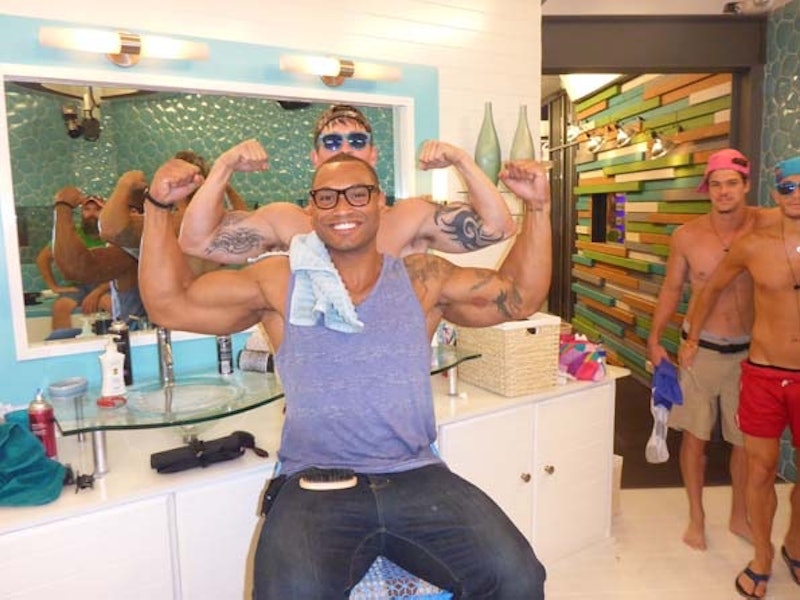 How the might have fallen. Or, more accurately, how the mighty bromances have fallen. Even though we devoted an entire study to Devin and Caleb's hardcore bromance, it appears that the love has already died. In fact, Devin has quit the Bomb Squad alliance and Caleb is outright conspiring to get him kicked out of the house. Whaaat? If that seems like a pretty extreme turnaround, then just be aware that this is Big Brother. There are no such things as friends in the Big Brother house. At the end of the day, this is a competition and you and your favorite house guests can't win together and split the winnings like Katniss Everdeen and Peeta Mellark, okay?

The nail in the Daleb (Cavin?) coffin was, ironically, Zach Rance. After Devin used his Power of Veto to remove Brittany from the block and put Zach up instead, Zach not only blew up on Devin but also began going around the house campaigning for votes to stay. His strongest supporter during this time was Derrick the undercover cop, who was the one who smoothed things over between Zach and Caleb and encouraged Zach to talk to Caleb to sway Caleb to his side. Their plan worked and Caleb made it clear that he wouldn't vote Zach out as long as Zach agreed not to go after Devin until the house guests go to jury — at which point Caleb wants Devin to be the first one out.

He lived up to his word by waking up Donny, and then pulling Brittany to the HoH room, to reveal to both of them the existence of the Bomb Squad alliance and reaffirm that they were the only two in the house he could trust aside from Frankie. Meanwhile, the Bomb Squad members are planning to deny, deny, deny that there is any such alliance that lasted beyond a week and Devin has a larger target on his back than ever before. So, with Devin going rogue and allying himself with Donny, Brittany, and Frankie (ha-ha) and with Caleb and Amber still running the Bomb Squad, who is going to come out on top?

Everyone in the house has been afraid to go up against Devin and Caleb thus far, so now that it's time to choose sides, who has the advantage? Are you Team Devin or Team Caleb? What are the pros and cons of being on either side? Well, let's see.

Pros: Devin is a strong competitor in the challenges. He's good at manipulating and bullying people around to his point of view. He's the current HoH. He's trying to play this game with integrity. (He's not succeeding and is probably lying, but it's the thought that counts?)

Cons: Devin is a bully, a creep, and a mysoginist. He's overly obsessed with his daughter. (Did you know he has a daughter? Because he'll tell you. A lot.) Most of the house hates him right now. He's broken promises to Paola and to the Bomb Squad, so allying with him is unpredictable.

Chances: Devin is the most unpopular person in the house right now, on and off the show. However, people are still somewhat scared of him, which might make him last a lot longer than that unpopularity would imply.

Pros: Caleb is a strong competitor in the challenges. He's a genuinely kind-hearted guy who hates being mean to people without justification. He's easy to reason with and quick to forgive. He's not the kind to play games. He's been loyal to his alliances so far.

Cons: Caleb is a misogynist and a stalker. He will throw people under the bus for Amber, his obsessive crush. If Devin apologizes, Caleb will probably welcome him back with open arms. He's not the current HoH anymore. He has a quick temper and can hold an intense grudge.

Chances: Caleb is kind of like the big brother of Big Brother in that everyone looks to him for approval and help, out of what seems like genuine respect. At the very least, he's better liked than Devin, which could mean he has more people who will rally around him to get rid of Devin and definitely means he'll take care of the people who do. It might be safer to be Team Caleb in this one.