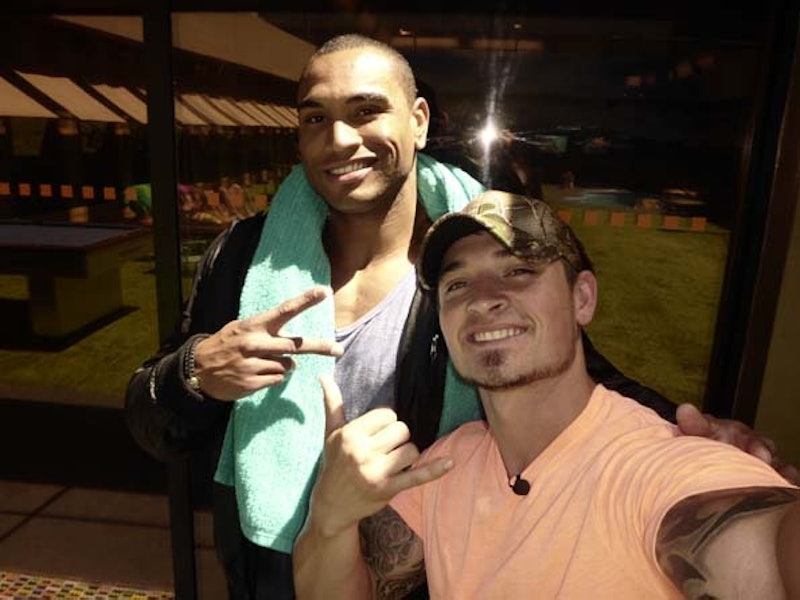 As much as I'd like to call them the Dynamic Duo, the fact of the matter is that the bromance between Caleb Reynolds and Devin Shepherd on Big Brother would best be described as the Dastardly Duo. From the moment they entered the house, Caleb and Devin have been two giants, the two players you need to have on your side, the two bullies controlling the house. Joey Van Pelt tried to warn us when she adopted her Alex persona, but no one listened. Now, it's really a matter of trying to figure out who is making you the angriest on any given day. At the moment, Devin is feuding with everyone while Caleb comes out smiling like roses, but we know that Caleb's not that innocent. He did stalk Amber Borzotra for a while, after all.

The thing that makes Caleb and Devin's bromance work is the thing that could also end up destroying it in the end. Caleb and Devin both have dominant personalities. Caleb is more laid-back and upfront about things while Devin is more underhanded and manipulative. When their forces combined, they managed to get the whole house to unanimously vote Joey out. When they're pitted against each other, like when Caleb and Devin fought over the Fourth of July weekend, you might as well break out the popcorn and watch to see where the dust settles. Everyone seems to like Caleb (for now), but everyone seems to be afraid of Devin and it's difficult to tell at this point which is more effective.

As is pretty standard for Big Brother, Caleb and Devin only seem to have each other's backs for as long as it's convenient to them. They're close, very close right now, and the other members of the house kind of edge around their bromance and try not to set either one of them off. However, it was proven during Caleb and Devin's falling out that Caleb is the one with the most power in the house at the moment. Devin can plot and scheme all he wants, but everyone in the house was basically falling over themselves to tell Caleb that they would vote Devin out if only Caleb would put him up.

At this point, it feels like it's only staying in Caleb's good graces that keeps Devin alive in this game. He's making all the wrong moves and Caleb is making all the right ones, having earned many fans since the show started even though he's insanely sexist. As great as it is to see the two of them getting along, their friendship doesn't seem like it can sustain itself for very long — and it seems like it would be a detriment to the whole house for it to last any longer than it has.

In fact, I'd rather see more of the friendship that's developing between Caleb and Frankie. They seem to have come a long way on the live feeds from the premiere episodes when Frankie said it would be impossible for the two of them to understand each other.

More like this
The 'Big Brother 24' Racism & Bullying Controversy, Explained
By Jake Viswanath
Kendall Jenner & Devin Booker Have Seemingly Reconciled Just Weeks After Split
By Jordyn Tilchen
What’s New On Netflix: 'Never Have I Ever' & 'Indian Matchmaking' Return
By Arya Roshanian
Everything To Know About The HBO Max & Discovery+ Streaming Service Merger
By Brad Witter
Get Even More From Bustle — Sign Up For The Newsletter