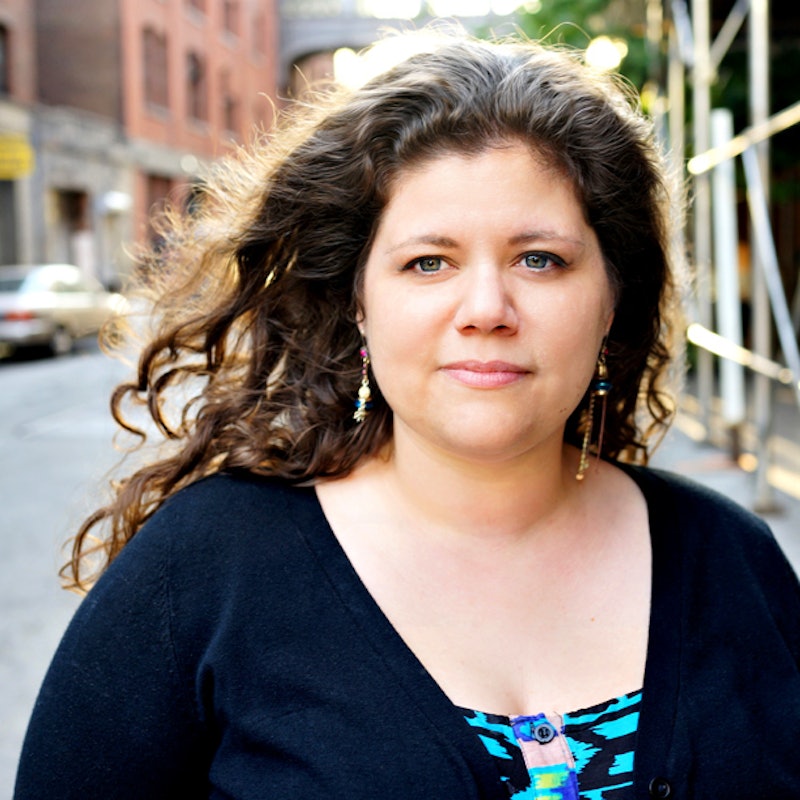 Rainbow Rowell's new novel Landline (St. Martin's Press) may be technically written for adults, but it's written for adults who have not forgotten the magic of a first real love — or perhaps for those who have and need to be reminded.

Georgie McCool (and yes, that's her real name) and Neal Grafton have been married for 14 years. They got engaged on Christmas in 1998, one week after a fight that broke them up, with Neal driving halfway across the country from Omaha to propose. But recently, and as Georgie thinks of it, maybe for much longer, they have been fighting. Georgie writes for a popular TV show; Neal doesn't jibe with the Hollywood lifestyle or Georgie's long hours with her best friend and writing partner, the handsome womanizer Seth. The novel asks a question, one not often asked in romantic stories: What if someone is perfect for you, but you aren't perfect for them?

As Georgie has finally been handed the opportunity she and Seth have always dreamed of — the chance to write their own pilot for a major network — she has to work through the Christmas holidays. After a fight, Neal takes their two children, Alice and Noomi, to Omaha alone, leaving Georgie behind.

Georgie starts staying with her mom, her mom's new husband who is three years older than Georgie, and Georgie's much younger sister, the 18-year-old Heather. And in her old room with her old yellow rotary phone, Georgia calls Neal. Only it's not her present-day Neal who answers; it's 1998 Neal, just days after their other huge fight, and just days before he proposes.

But make no mistake. Despite the magical elements, Landline is a contemporary, realistic novel. Does this magical rotary phone exist, or does Georgie just miss her husband enough to imagine him up? Rowell leaves small hints, one way or another, but by the end, I'm not sure it matters:

These rotary phones were like meditation. They forced you to slow down and concentrate. If you pulled the next number too soon, you had to start over from the top.

Through Georgie's 1998 Neal conversations, readers are sucked in to the couple's origin story. How they met, how they fell for each other, how he proposed, and what it was like when they had children. Everything that leads them to this moment — this Christmas apart after a big fight.

It's because of this that Landline becomes a sort of call-and-response to Rowell's young adult works, Eleanor & Park and Fangirl. Yes, those young people fell in love and may have even promised their lives to each other, but what does that mean? Landline stands to answer that.

It may seem like a cliché to tell a story of a thirtysomething married couple that no longer have that first-love spark, instead invested in work and children. But it's a cliché for a reason. (And I hope Rowell isn't having trouble with her partner, because it reads pitch-perfect of a marriage in quiet turmoil.)

As opposed to how teenagers might feel in a story, a fight in Landline is never a yelling match or a major event. Instead it's presented as quiet resentments and frustrations taking their toll over the long haul:

Sometimes she lost her place when she was arguing with Neal. The argument would shift into something else — into somewhere more dangerous — and Georgie wouldn't even realize it. Sometimes Neal would end the conversation or abandon it while she was still making her point, and she'd just go on arguing long after he'd checked out.

And yes, Landline presents love as a series of sacrifices. But it's not as bitter or unromantic as that sounds. When teenagers meet and fall in love, as happens in Rowell's other novels, the obstacles come before the final destination of being together. But the question echoing through Rowell's Landline is much messier than that:

How does anyone ever know whether love is enough?

But not so fast — Rowell isn't allowing readers to grab their Ben & Jerry's, curl under a blanket, cursing all relationships as black holes. By pitting Georgie alongside teenager Heather, her college-aged self, and as a writer for a show billed as Square Pegs plus My So-Called Life plus Arrested Development (i.e. the best fictional show ever), readers are allowed to see if 38-year-old Georgie's perspectives on love are realistic or out of whack.

There is loads of young love in the love between Neal and Georgie. After their fight, Georgie stays up all night talking to 1998 Neal on the phone for hours. She gets as nervous as a 14-year-old when she calls her present-day husband post-argument. There are grand romantic gestures; she still finds his smile adorable.

Maybe Rowell is trying to make a case that although, yes, decades of married love don't quite have the spark of young love, the best elements of first falling for each other are still there. But sometimes extra years of life together can make it hard to see everything that's there:

You don't know when you're twenty-three. You don't know what it really means to crawl into someone else's life and stay there. You can't see all the ways you're going to get tangled, how you're going to bond skin to skin. How the idea of separating will feel in five years, in ten — in fifteen. When Georgie thought about divorce now, she imagined lying side by side with Neal on two operating tables while a team of doctors tried to unthread their vascular systems. She didn't know at twenty-three.

Love grows, morphs, pulls you together, but you always still have what you always had when you first met. You just have to look harder to see it, and risk more to feel it.

And then there's Georgie's Duckie. Like Duckie to Molly Ringwald's Andi in Pretty in Pink , Seth is Georgie's best pal, confidant, and was the one that was there the only other time Neal broke up with her.

Though some movies since the John Hughes classic have tried to right what they saw is Pretty in Pink's wrong — Andi not ending up with Duckie — Landline, even with its heavy 1980s and 1990s nostalgia, doesn't fall for that trap. That best friend that's always there for you and seems perfect for you and has stuck with you for decades? He's probably not actually the best one for you. Seth and Georgie have hilarious chemistry. When discussing how Georgie acts at parties, they have this exchange:

But Rowell doesn't force us into a love triangle. Rather, she uses Seth to show how work and entanglements with other people you love are all part of things married people have to figure out, and possibly sacrifice, together.

Rowell has found a way to imbue the young adult magic into an adult novel. It's nostalgic and realistic (yes, even with the possibly magical rotary phone), and it takes young love into adulthood where it has to face different questions. Fans of Rowell will surely gobble it up, but any twenty- or thirtysomething in a long-term relationship will relate.