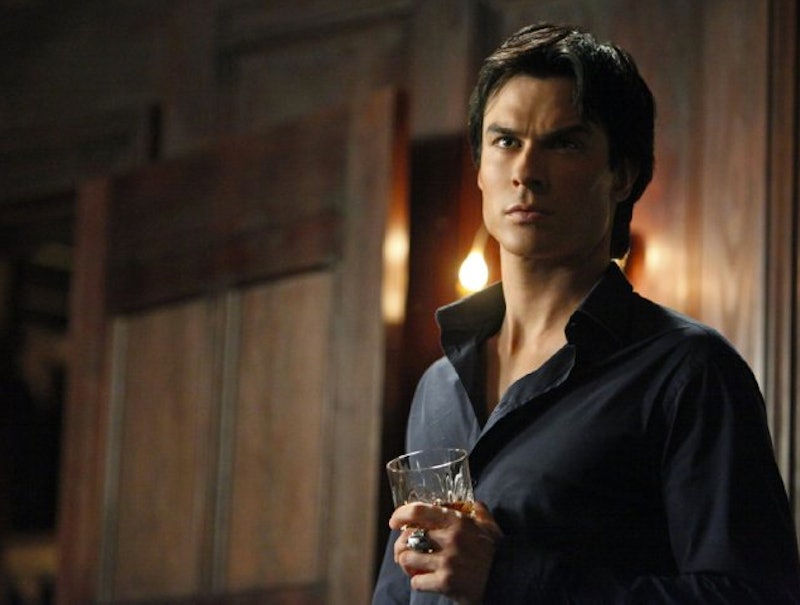 Anyone else still reeling from The Vampire Diaries Season 5 finale? Because I sure am. Whoever thought up the saying “time heals all wounds” has clearly never experienced a Julie Plec cliffhanger (something that’s way worse than any hangover, by the way), which left the fates of Damon Salvatore and Bonnie Bennett completely up in the air. Are Damon and his witch frenemy dead? Possibly. Would that render me inconsolable? Absolutely… at least as far as Damon's concerned. (Sorry, Bonnie.)

But one of the perks of watching a supernatural show like TVD is the fact that pretty much anything’s possible. If the obliteration of the “Other Side” has, in fact, resulted in their deaths — we’re talking worse case scenario here, folks — there’s still plenty of ways to see them again… and we will see them again. Plec herself has confirmed that both Damon and Bonnie are contracted through Season 6. [Insert huge sigh of relief here] So, whether it be due to flashbacks or even hallucinations, one way or another we’ll still be seeing Damon’s gorgeous face up on our small screens come next fall.

However, one of the many theories that have begun circulating the Internet regarding next season is the prediction that Damon will return to the show not as a vampire — but as a human. Of course, nothing has officially been confirmed, but Plec has hinted multiple times that his return could be in a completely different context, even calling Season 6 a total “reset” that will allow each character the chance to start over. For Damon, that could very well spell out the restart of his humanity. And as much as I love the show and the many twists and turns it’s taken me down — I think turning Damon human would be a terrible mistake.

There’s already been many valid points made about why turning Damon human could be seen as a good thing, and yes, any Damon is certainly better than no Damon at all. (OH GOD, THE HORROR.) But it’s a concept I just can’t get onboard with. For one thing, Damon is just so good at being a vampire.

He’s a badass, impulsive, daring, and incredibly charming — all of which is significantly heightened by his vampire persona. Sure, we’d still get a ton of that Damon sass we’ve come to know and love, but those trademark threats of his are going to carry a lot less weight without any vampire strength to back it up. Like this, for instance…

Thanks to flashbacks, we’ve already seen Damon during his pre-vampire days and besides the awesome hair it’s been nothing to write home about. As a human, Damon always felt like he was in Stefan’s shadow. But becoming a vampire changed everything. Unlike Stefan, who’s always had a hard time adjusting to the transition (hence the whole Ripper issue), Damon has completely embraced his vampire nature and is totally in his element. His little brother may have won over Katherine’s heart back in their human days, but it's Damon who Elena ended up choosing. (Human Damon: 0, Vampire Damon: 1) To take being a vampire away from him is to take away part of who he is.

Plus, that means no more compelling (a.k.a. getting close-ups on those smoldering eyes)…

Believe me, I want Damon to return to the show as much as the next girl (possibly more if we take my restraining order into account). I just don’t think making him human is the way to go about it. We’d lose too much of the guy we’ve come to love in the process. Vampire Damon 4-eves.