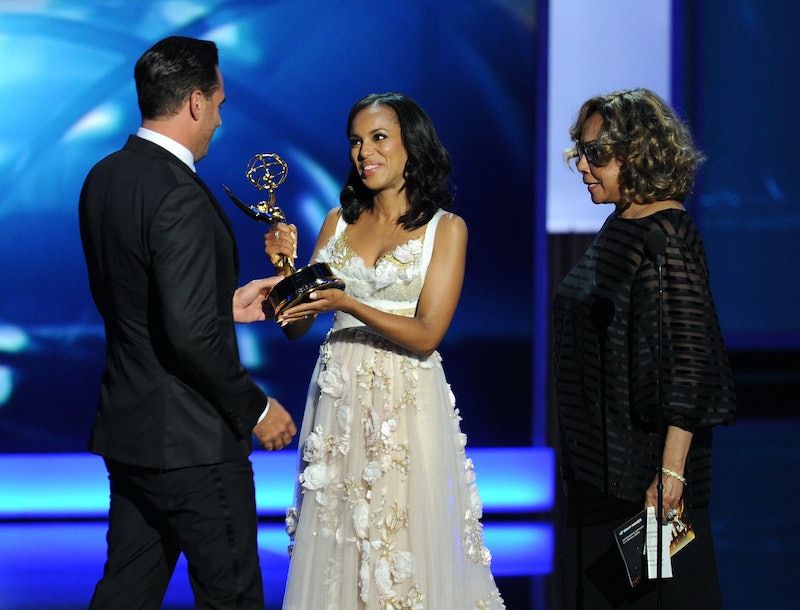 Like most awards shows, the Emmys have a huge problem with diversity. Sure, part of the blame lies with the deep-seated prejudices within Hollywood — reports like those from the Directors Guild of America reveal that directors who identify as women or people of color aren't getting hired in the television industry. But the Emmys aren't making many huge strides to bridge that gap. A woman of color has never won an Emmy for Lead Actress in a Drama Series, and a person of color has never won an Emmy for Best Director in a Comedy Series. While the statistics vary, they don't get much better: Only 19 percent of the winners for Outstanding Writing in a Drama Series were female, while a measly 17 percent won for Outstanding Writing in a Comedy Series. And last year's nominees didn't exactly break the trend. The only actors of color nominated were Kerry Washington, Don Cheadle, Sofia Vergara, and Alfre Woodard and the only women nominated for writing awards were Tina Fey, Abi Morgan, and Jane Campion. You don't even have to do the numbers on those to know that's a pretty poor showing. But what about the just-announced 2014 Emmy Award nominees? Have things changed?

Although this year's awards don't mark a dramatic difference in the diversity of Emmy nominations, women and minorities are making small inroads in the awards ceremony, especially in the comedy categories. The Emmys finally recognizing Orange is the New Black means that Laverne Cox and Uzo Aduba are finally getting recognized for their great work on the show as Guest Actresses in a Comedy Series. It also means that Jodie Foster got a deserved nomination for her directing on the show, while Jenji Kohan and Liz Friedman picked up nominations for their writing. Another young and diverse show is also responsible for another well-deserved nomination: Andre Braugher, who received a nod for his work in Brooklyn Nine-Nine. And Don Cheadle has also been nominated for a second time in the Lead Actor in a Comedy Series category for House of Lies.

Unfortunately, the Drama categories still seem like a place for white dude antiheroes. Sure, Kerry Washington has been nominated a second time for Scandal, Moira Walley-Beckett got a nod for her writing on Breaking Bad, and Reg E. Cathey from House of Cards and Joe Morton from Scandal are both nominees in the Outstanding Guest Actor in a Comedy Series category. But taking a look at the drama series nominees, it's not difficult to see that the creative awards are overwhelmingly male and the acting awards are overwhelmingly white.

So though this may not mark a historic year in diversity at the Emmys, the nominations do better reflect the slowly increasing diversity on our television screens. Diverse, well-rounded shows like Orange is the New Black, Brooklyn Nine-Nine, Scandal, and American Horror Story: Coven are getting their due, and bringing more women and people of color into the spotlight. And I can't wait to see what Orange Is the New Black Season 2 does for the 2015 Emmys.