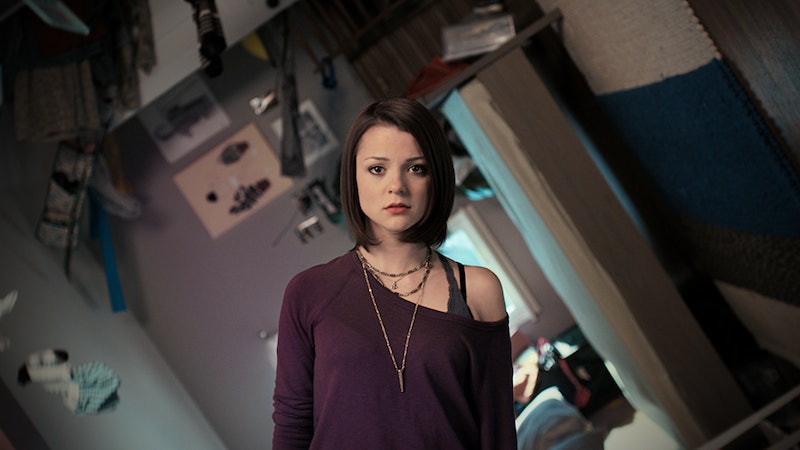 There's a lot of great stuff in MTV's latest scripted series Finding Carter . For starters, there's the show's intriguing, got-you-at-the-logline premise: Carter, a 16-year-old girl with an awesome mom, gets the shock of her life when she learns that her mother is actually the woman who kidnapped her when she was just a tot. Unfortunately for Carter's "real" family, they're the last people that Carter wants to be with — and she's devastated that she was ripped away from the woman she maintains is the only mother she'll ever want. Though we see the world through mostly Carter's perspective, her character may not be the heroine of the story — and that makes Finding Carter all the more fascinating to watch.

Carter's world is filled with complex characters. There's Carter's mother, Elizabeth, who is determined to take down Carter's kidnapper (even at the expense of her relationship with her recovered daughter), Carter's father, David, who is secretly penning the sequel to his kidnapped kid memoir behind Carter's back, and Carter's twin sister Taylor, who, after years living in the shadow of the "terrible thing" that happened to Carter, is frustrated with her lack of life experience. Unfortunately, Carter treats all of these characters like utter crap — and it's starting to make me wonder whether we're actually supposed to sympathize with the titular character.

When we first meet Carter, she's arrested for breaking into a merry-go-round with a bunch of pot smoking pals — clearly the girl's got a touch of a rebellious side. What keeps her grounded is her mother (read: faux-kidnapper-mom) who is Carter's BFF. When the police learn that she's actually "Linden," a girl who was kidnapped off her front lawn 13 years earlier, they drag Carter back "home" to be reunited with the family she never knew.

Naturally, Carter doesn't take this so well, and it isn't long before she starts clashing with her new family. Carter's rebellious spirit doesn't jive with Elizabeth's stricter parenting style — and it really doesn't help that Elizabeth is trying to find Carter's kidnapper and throw her in prison. So, Carter begins to act out. At first, it's little things — staying out too late at a party, wearing pajamas to school, and, essentially, acting like any TV bratty teen. Then, when Carter learns how actively Elizabeth is hunting down Carter's kidnapper, she goes into full-on attack mode. She and her friends set the stage for an elaborate prank at the mall, where, instead of finding Carter's kidnapper waiting to take Carter away, Elizabeth finds a hundred smiling teens waving foam middle fingers in the air. Even Max, Carter's on-again off-again boyfriend (Wyatt from The Fosters !) thinks that Carter's prank edges on the cruel side.

But before we start thinking of Carter as solely a party-loving brat (which, let me be totally honest here, I kind of already do) maybe we should consider what Carter's behavior is telling the audience. All we've seen so far of Carter and her mother's relationship is that it was, essentially, the greatest thing since Gilmore Girls. And while they may have had a very loving relationship, that doesn't mean that Carter isn't suffering from her own version of Stockholm Syndrome. It's quite possible that Finding Carter will reveal more details into the relationship between Carter and the woman she calls her mom — and maybe it's not exactly as happy as Carter remembers it.

Currently, Carter's not a particularly likeable character — she's a little too "cool" to be relatable and a little too oblivious to how her actions hurt others. But given Carter's strange situation, I'm not entirely convinced that this attitude of hers is just her personality at work. Carter's hardly processed the fact that her own mother was actually the one who stole her from another family — she hasn't even questioned why or how someone could do that. Finding Carter may have given us a slick and snarky Carter, but as the season goes on, I wouldn't be surprised to see the show reveal further truths about Carter's behavior. Does she remember more about her kidnapping than she currently thinks she does? Will she eventually learn to sympathize with her newly-found family? Fans on Twitter seem to be on the verge of losing their patience.

There has to be more to Carter than meets the eye. Luckily, I like the show enough to stick around to find out.