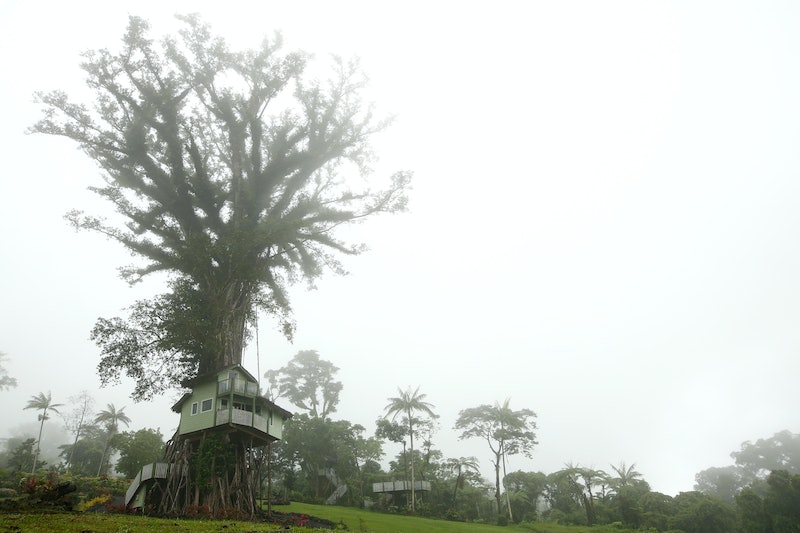 Who didn't want a tree house to play in when they were kids? If you say you didn't, you're probably lying. (Or you had a somewhat upsetting childhood devoid of Berenstain Bears books.) A lucky few had their parents build them their own personal fort in the biggest tree out back, but most of us just had to see them in our dreams.

But just when you thought you had outgrown the possibility of a tree house, some heroes of architecture have stepped in to make sure the childlike joy of living high up in a tree wasn't reserved for just those in grade school. All around the world, designers and those in the hospitality industry are trying to bring tree houses back into our grown-up lives.

These tree houses are built for various reasons: Trying to live with nature while not disturbing the existing environment, building a unique concept for a resort in the hopes to attract visitors from across the globe, and yes, just for the pure whimsy of it all. But just like the trees in which they are built, each tree house is completely unique. Some are intended to morph straight into the forest, while others have the real goal of standing out.

No matter their purpose, these tree houses from around the world are some of the coolest we've seen.

Designed to look like a Japanese lantern on stilts, 4Treehouse on the edge of Lake Muskoka was built around the base of four separate trees to reduce the environmental impact. And this house is no small feat — literally. It's three stories high.

This unique tree house isn't your average playhouse. Designed by Japanese architect Terunobu Fujimori, inside the structure is a fully functioning tea house, where visitors must climb a three-story ladder and remove their shoes to enter. Seems hard? Well its name literally means "too-high teahouse," so yes, yes it is.

Said to be the tallest tree house in all of British Columbia (yes, there are a lot of tree houses in B.C.), the three-story tree house is located in the Enchanted Forest, and it sure looks appropriate there, doesn't it?

This massive structure is more like a world-class resort than a treehouse. The Minister's Treehouse in Tennesse is one of the world's biggest, and it includes a chapel, bell tower, basketball hoop, and a huge swing. Rumor has it, the architect believed he was commissioned by god to build the treehouse.

Care to venture outside of the box for your next vacation? You can stay in a "treesort," which functions like a sort of treehouse metropolis. It's the largest conglomeration of treehouses in the world, and each "room" is unique. Don't worry about your heavy bags — there's a pulley system to hoist them up to you.

The "Rooms" at the Treehotel in Harads, Sweden

Each treehouse room in this completely unique hotel in Sweden is built with a different inspiration in mind, and they're all totally amazing. The "invisible" Mirrorcube treehouse room (pictured above) is camouflaged into its surroundings by glass panes that make it seem like part of the forest. (Though that's cool for visitors, no word on how birds are handling it.)

Speaking of birds, they might find a home in this Birds Nest hotel "room." And though it may look rustic, the inside is completely modern and updated with room for the whole family.

Perhaps the most kitchy space at the Treehotel, the UFO room is perfect for scifi fans. Unlike the other rooms, it's designed to be completely different than its surroundings and the bedrooms inside are decorated with alien-like pillows and decor.

Let's admit it: At one point or another, we all wished we lived in a treehouse. So did the Danilchik family, except they made their dream a reality and built a Swiss chalet-style home in two Western Red cedar trees. Yes, this treehouse is a full-time personal residence, inspired by the family's favorite books, Heidi, Swiss Family Robinson, and The Giving Tree .

Like Keebler elves for cookies, the Treehouse Brewing Company employees are hard at work in their little home in a tree brewing craft beer for all of Ohio. Let's hope there's a net.

These suspended spherical treehouses borrow from the idea of sailboat construction and rigging. They hang from the trees in such a way that they are sturdy, but they'll sway with the breeze. You can rent one per night all year round.

From 2008 to 2009, this treehouse operated as a functioning restaurant as part of a Yellow advertising campaign. Today it stands as a rentable space for events and weddings, if you feel like tying the knot 40 meters above the ground, up in a tree.

More like this
Forestcore Is About To Take Over Your TikTok FYP
By Sam Ramsden
The 3 Best Heated Steering Wheel Covers
By Margeaux Baulch Klein
The 8 Best Speakers For Record Players
By Megan Gray
The 5 Best Blankets For Puppies
By Jenny White
Get Even More From Bustle — Sign Up For The Newsletter
From hair trends to relationship advice, our daily newsletter has everything you need to sound like a person who’s on TikTok, even if you aren’t.