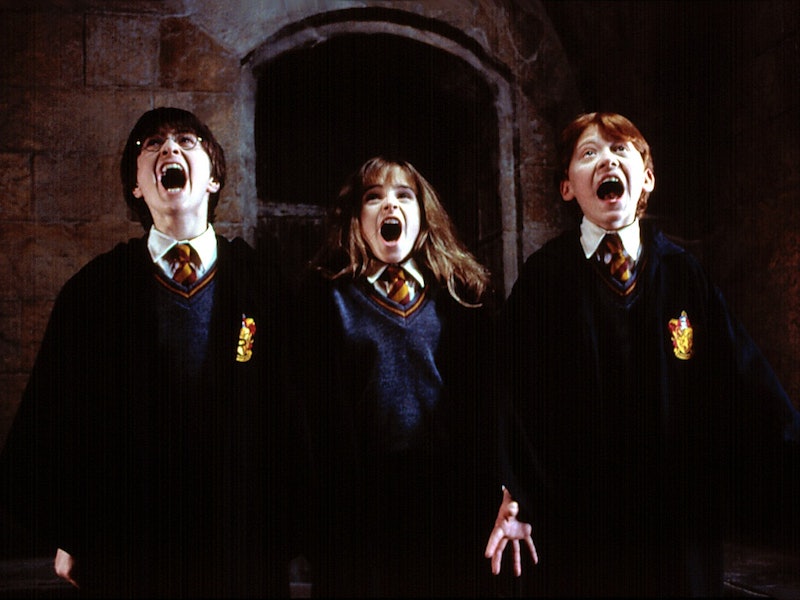 I know what you're thinking — Harry Potter and the Sorcerer's Stone is the closest book-to-film translation you've ever seen. And you might be right. All of the most important parts of J.K. Rowling's first Harry Potter novel appear in the 2001 film adaptation, there's even exact replication of dialogue. Thanks to ABC Family's latest Harry Potter Weekend, I couldn't help but revisit the film that started it all. And, sorry, people, but Sorcerer's Stone, while a perfect introduction to the film series, is really not that much like the book.

Here's the blessing and the curse of being a Harry Potter fan — sometimes you have to choose between the books and the movies. In some cases, like with Half-Blood Prince, it's easy because the movie went far beyond the book and failed. I, unfortunately, am one of those people that constantly picks apart book-to-movie adaptations for their differences, but I'd never done it with Sorcerer's Stone. Well, until now. For all intents and purposes, Warner Bros. first film adaptation of Rowling's boy wizard series did its job — it maintained the integrity of the book and sparked the film franchise. And after getting swept up in the magic of Hogwarts and Harry's hero's journey, it's difficult to spot the glaring omissions and changes that came when Sorcerer's Stone went to the big screen.

So, here we are — for all of my Potter fans that couldn't help re-reading the books before the movies, thus ruining them for yourself — here are 11 changes from Harry Potter and the Sorcerer's Stone's book-to-movie adaptation.

The Boa Constrictor At The Zoo

In Harry Potter and the Sorcerer's Stone, Rowling writes that Harry spoke Parseltongue and released a Boa Constrictor, but in the film, the snake is said to be a Burmese Python.

In Rowling's books, Dudley and Petunia Dursley are described as having blonde hair, but in the films, they both have nearly black hair.

In the Sorcerer's Stone book, Harry first meets Draco at Madam Malkin's robe shop in Diagon Alley, where he's blatantly rude to Hagrid. They meet for the second time on the Hogwarts Express, where Draco makes a snide remark about choosing his friends wisely. In the Sorcerer's Stone film, Harry doesn't meet Draco for the first time until they're about to be Sorted, it's then that he makes his comments about Harry choosing to be friends with the Weasleys.

In the book, Harry's first trip to Kings Cross for the Hogwarts Express is accompanied by his aunt, uncle, and Dudley — but, in the film, it's suggested that he and Hagrid have been together since his July birthday when he drops him off at the train.

The Sorting Hat only sings three songs throughout the Potter series, in books one, four, and five. But, unfortunately, in the film adaptation of Sorcerer's Stone, the Sorting Hat's song is cut. Read the full song here.

There Is No Potions Task

Did you ever notice that Hermione's crowning achievement (and possibly the moment that makes us question whether she should be in Ravenclaw instead) is missing from the Sorcerer's Stone movie? Professor Snape's protective task for the Stone, the potions riddle, was cut from the film. Instead of moving forward into this task, Hermione stays with an injured Ron at the giant chess set and Harry sets off alone to face Quirrell. Why, Warner Bros.? Why?!

No Peeves The Poltergeist

How could we forget about Peeves the Poltergeist? Apparently, because Warner Bros. decided that he wasn't necessary. Peeves didn't make the cut when Sorcerer's Stone got its film adaptation and well, now that I think of it, I'm sad that we never got to hear him call Harry a nutter.

Harry Only Sees His Parents In The Mirror Of Erised

In the film, Harry only sees his parents standing beside him in the Mirror of Erised, but in the book Harry sees his entire extended family standing behind him in the mirror.

In the books, Neville joins Harry, Ron, and Hermione on their detention in the Forbidden Forest, but in the film, Neville doesn't get detention with the group. It doesn't necessarily effect the story, because Harry meets Voldemort anyway, but it's an omission worth acknowledging.

The film version of Sorcerer's Stone skipped the struggle of getting Norbert up to the Owlery to get picked up by Charlie Weasley and his fellow dragon handlers. Instead, Dumbledore simply sends Norbert away to who we assume is Charlie, but it's never addressed.

The Arrival Of Harry's Nimbus 2000

In the book, McGonagall keeps Harry's Nimbus 2000 delivery a secret, so as to keep his position as Gryffindor seeker the team's secret weapon. The Sorcerer's Stone film, however, shows Harry getting the massive delivery and opening it with an audience — hardly concealing that he's the youngest House player in a century.

More like this
At 14, Jenny Han Wrote Rom-Coms About Her Friends & Fan Mail To Leo DiCaprio
By Alyssa Lapid
The 'Spiderhead' Movie Ending Is Nothing Like The Short Story It’s Based On
By Morgan Leigh Davies
Everything You Need To Know About The 'Knives Out' Sequel
By Grace Wehniainen
The 'Hocus Pocus' Sequel Finally Has A Release Date & It Makes Total Sense
By Shannon Barbour and Radhika Menon
Get Even More From Bustle — Sign Up For The Newsletter