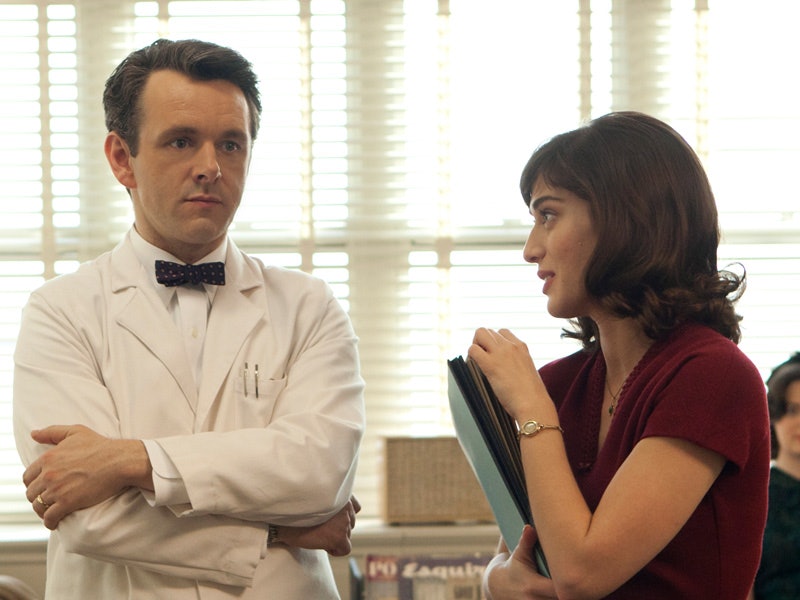 Showtime's steamiest hit is like no other show on TV right now. Based on real, game-changing events in medical history, Masters of Sex is thrilling to watch. We find an awkward, American-accented Michael Sheen navigating his way around some rather personal situations as William Masters. Lizzy Caplan shows no sign of Mean Girls' Janice Ian in her sophisticated yet sensual portrayal of Virginia Johnson. I'm hooked. But I can't help but wonder: Just how embedded in history is this show?

In Season 1, we see Masters peeping in on prostitutes at work, his boss's wife admits her sexual inexperience to him, and Masters and Johnson participate in their own practical sex study. We know some of what happens in Season 2 as a result of the true events the show is based on, but the show's events must be a little more glamorous on-screen than the real 1950s approach to the study of sex that inspired the series, right? Screen adaptations always have to make some changes in the interest of entertainment, and while the show is already sexy by nature, it definitely hits on the important factual points, too. Things get a little fuzzy with the timeline, but it is still entertainment, after all.

The Characters Are Real, But Their Personalities Are Tweaked

Masters was really a successful OB-GYN who had an interest in this area of study. Johnson was really a divorced, single mother of two without a college degree and any medical experience.

Like the show indicates, Johnson was the people person. She sat with patients, made them feel comfortable, got information out of them, and was the key person to handle the human interaction. According to a USA Today interview with sex therapist and Masters collaborator Ruth Clifford, Masters was not as cold and awkward, but "charming," "delightful," and "funny." She even went as far to say he had an "adorableness" about him and a "seductive kind of character." These are not things we see from Sheen's portrayal of the doctor on Sunday nights. And as a viewer, I find his social ineptitude makes for a brilliant contrast with Johnson's bold personality and Libby Masters's eager desire to be the "perfect wife." Though those endearing personality traits don't disprove that the real Masters handled true intimacy awkwardly, which is a big theme in the show.

Masters & Johnson Got It On... For Science

As it happens in the show, the real duo began their sexual relationship in the interest of the study. And just like in the show, it's likely that there was something more than science there, because the two went on to marry. The show is making a lot of not-so-subtle hints at this same relationship trajectory for TV Masters and Johnson, but the reality was that Masters did not divorce his wife and marry Virginia Johnson until more than a decade into their time doing the study. It seems as if the show is speeding things up a bit. Of course, in TV years, that's a long time to wait to make things happen.

Late in life, Virginia Johnson claimed in an interview that though she and Masters were having a lot of secretive sex early in the study (while Masters was still married), the desire was one-sided and that she had to oblige because she wanted to keep the job. Yikes. In real life, the couple's personal and academic relationship ended with their divorce, so it's up in the air whether the mutual yearning we get from both Caplan and Sheen on-screen is indicative of their true early sexual experiences or not.

But All That Inappropriate Public Sexual Tension Is Pure TV Magic

As much as it makes for great TV to have Johnson and Masters eyeing each other while their patients got it on or bickering like a couple during test-subject interviews, it seems the two kept things strictly professional, even to the level of iciness with each other during business hours. As told to USA Today, Clifford and Judy Simic, Simic also a former sex therapist who interacted with the pair, said that they saw no affection between them.

Clifford said Johnson and Masters were rarely in the office together, and stayed apart when they were. She couldn't tell they were married by the way they acted when in the same room. Simic was a student at two of their training sessions and many of their seminars. She calls their personal interactions "aloof" and their teaching style "formal." I'll take the version with stolen glances and sexual tension, thank you very much.

And The Sex Workers? Yeah, That Happened.

Before conducting the study on "regular people" test subjects, Masters really did use prostitutes — initially. More than 100 sex workers participated before the duo moved on to observing non-sex workers, which they did in extremely large numbers. It's unclear whether or not Masters actually peeped through a hole in the closet door while a client got what he paid for, though, and this part of the study lasted longer than the show would lead viewers to believe.

If All The Clinical Sex Scenes Seemed Like Overkill, Think Again.

Masters and Johnson observed 10,000 completed sexual cycles during the observation study — but keep in mind they didn't spend their entire sex-studying career being voyeurs. Still, that's a lot of sex in a relatively short amount of time. At the beginning of the study, these observations were one of the main aspects, and it was the shared connection Masters and Johnson had when just starting out. Masters of Sex is right to include it as a common, important occurrence.

The Test Subjects Weren't All In TV Shape IRL

Because of casting directors and an unrealistic beauty standard in show business, viewers are treated to some seriously attractive actors cast as volunteers for the study. In real life, the hundreds of men and women Masters and Johnson got for the study were not all in industry-standard shape. Test subjects came in all shapes, sizes, and ages — you know, because the study was about sex, not about maintaining superficial entertainment industry standards. That means it probably didn't look like a glossy scene from a TV show when Masters and Johnson were doing their research. It looked like the thing they were studying: you know, real life.

Their Contemporaries Were Not Very Accepting Of Their Work

It's true that this study was groundbreaking for the time (that time being the dark ages of sexual culture in America), so people didn't want anything to do with this voyeuristic research and they didn't want to talk about it. There were a lot of sexual and gender politics involved.

Later, Masters and Johnson would publish several books on the topic, and though not everything they published was universally accepted by the medical community, many of their writings were translated into different languages and their books became best sellers.

They Taught Us A Lot Of What We Know About Sex (Thanks, Friends!)

Masters and Johnson were some of the first people to really delve into sexual research, especially since it was so stigmatized and overlooked as a legitimate area of study. The team turned out some innovative discoveries as a result of their observations, ranging from sexual resiliency in men and women to the ins and outs of sex after age 70 and a host of other facts that are basically common knowledge now. But thanks to Masters and Johnson, these ideas that had gone undiscovered with little to no research, interest, or attention prior to this study are now part of most folks' sexual knowledge bank. Thanks, guys!

More like this
Why Simone Ashley Had To Study Snails For Intimacy Training, Pre-‘Bridgerton’
By Grace Wehniainen
Daryl McCormack On His Unusual First Audition With Emma Thompson
By Olivia-Anne Cleary
Superman & Lois Season 3 Will Introduce A Complicated New Supervillain
By Brad Witter
Here's Why You'll See Less Of Olivia Rodrigo In 'HSMTMTS' Season 3
By Bustle Editors
Get Even More From Bustle — Sign Up For The Newsletter