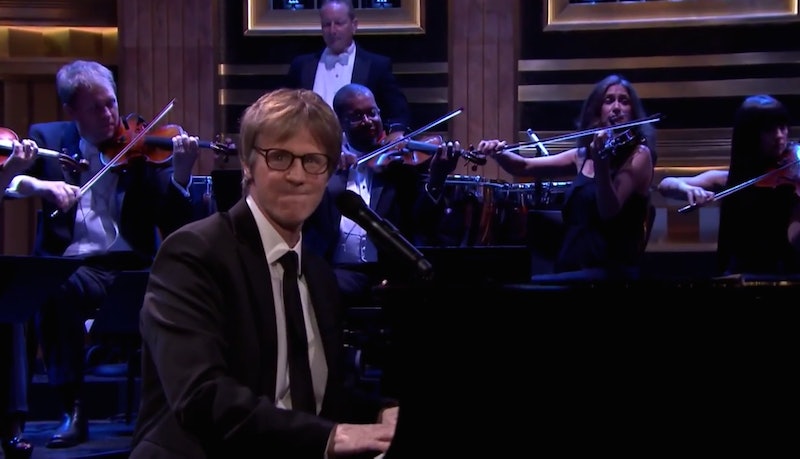 Perhaps fans of retro-Saturday Night Live will appreciate this more than others, but I believe that everyone can benefit from a little bit of "Choppin' Broccoli" in their lives. During last night's episode of The Tonight Show Starring Jimmy Fallon, Fallon invited Dana Carvey to play a haunting rendition of Saturday Night Live 's "Choppin' Broccoli," a.k.a., "The Lady I Know," a song which originated on one of Carvey's well-known Derek Stevens sketches — the best one! — on the series.

In the Tonight Show clip from last night, Carvey plays the performance similar to that of the sketch: It's clear that, though he's got a melody down, he's making the words up as he goes. Just take a look at the way he sings the first line, "she's cold as ice," then pauses, shrugs, and goes: "Paradise." Lyrics that pop up later on: "The lady I know/ If I didn't know her/ She'd be the lady...I didn't know." Classic Carvey, classic Derek Stevens. This is priceless.

The song originated from the first Derek Stevens sketch all the back in 1986, when Sigourney Weaver hosted the show to promote Aliens.

You can check out Carvey's Tonight Show performance below:

Compare that with the original skit (which is complete with Sigourney Weaver!) below: