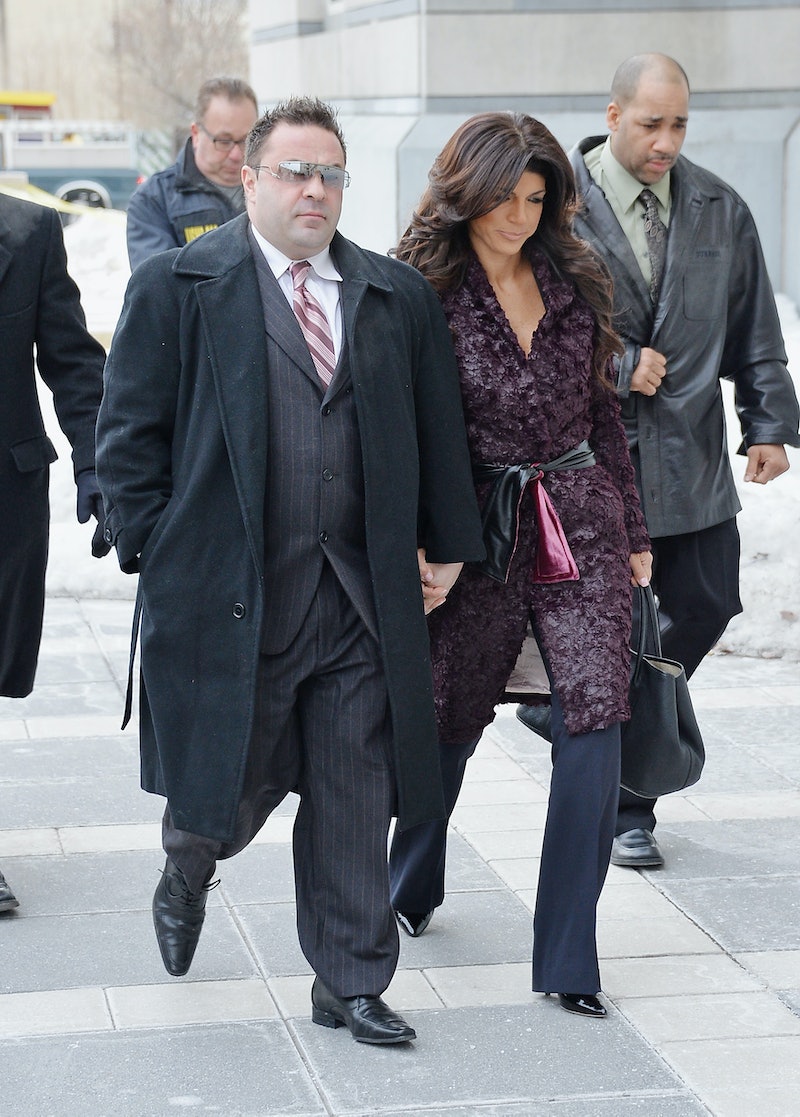 "This is my job and I want to keep going." That's what Teresa Giuduice told People of returning to The Real Housewives of New Jersey for its sixth season, even after pleading guilty to four counts of fraud in March. The new season premieres on Sunday and this year the problems might be a little more "real" than RHONJ's standard table-flipping fare. Teresa and her husband, Joe Giudice, were indicted on federal charges of bank and bankruptcy fraud almost exactly a year ago. So, what's been happening since? How have they been able to not only avoid jail time thus far, but also continue to film a reality television show? Here's an up-to-date primer on the Giudices' legal issues.

In July 2013, the Giudices were slammed with a 39-count indictment for a whole mess of charges including wire fraud, mail fraud, bankruptcy fraud, and making false statements on a mortgage application. It was alleged that the various frauds were committed between September 2001 and September 2008, but in addition to those fraud charges, the Giudices were also accused of hiding some of their assets when they filed for Chapter 7 bankruptcy in October 2009, and didn't report accurate information about Teresa's RHONJ salary or their businesses.

Teresea and Joe cycled through a number of possible solutions for their legal woes, first pleading not guilty in November 2013. Then, in January, they filed motions to have separate trials in the federal indictment against them, with the intention of claiming that Teresa had no knowledge of any criminal activity. Joe seemed ready to plead guilty to at least some of the charges, but only if they were granted separate trials.

But something must have changed, because in March of this year, Joe and Teresa arrived hand-in-hand to the the U.S. District Court in Newark and plead guilty to four counts of fraud, including conspiracy to commit mail and wire fraud and three counts of bankruptcy fraud.

For the charges the Giudices have plead guilty to, Teresa is facing up to 27 months in prison, and Joe could be facing 46 months. But Joe is in deeper water. Joe is not a U.S. citizen — the damages alleged in his case are upwards of $1 million, classifying these charges as an aggravated felony, meaning that after he serves his jail time, he will most likely be deported. In a statement after pleading guilty, Teresa said of taking responsibility for her mistakes, "I am heartbroken that this is affecting my family. Especially my four young daughters, who mean more to me than anything in the world."

This season of RHONJ is likely to be a difficult one for the Giudices, as they face these legal problems and possible jail time while raising their children, and in Teresa's case, partaking in the usual antics found on the reality series.