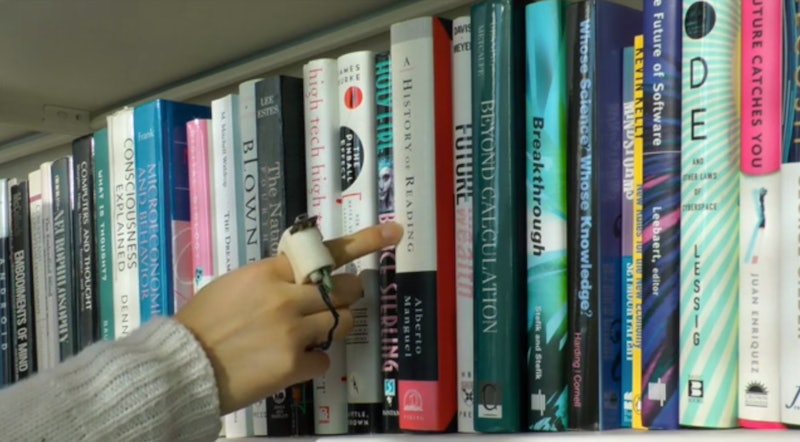 It may be redundant, but I’ll never tire of hearing it or saying it: technology is really changing how we read. We just heard about a project that’s turning treasured children’s titles like Goodnight Moon and The Very Hungry Caterpillar into 3-D tactile picture books for visually impaired children. Now, Paste magazine reports that the MIT media lab is also working on an amazing new reading innovation. Called the “Finger Reader,” it’s a gadget you wear while you read that transforms printed text into audio feedback.

As your ring-bearing index finger traces over words on a printed page, special software traces your movement as a small camera on the ring, connected to a mobile phone or laptop, captures an image of the text and reads the words aloud. Vibration motors warn readers when they’ve strayed from the text. For the blind and visually impaired, this means the ability to read in real time — not just novels and textbooks, but also menus, magazines, fliers, and other spontaneous reading material when Braille is not readily available.

“It’s a lot more flexible, a lot more immediate than any solution that they have right now,” MIT professor Pattie Maes, who founded and leads the product development team, told the Associated Press.

The Finger Reader, which has been in the works for nearly three years, is impressively versatile and conveniently portable — but it has its glitches, too. There’s the occasional lag or mispronounced word, and it’s not yet fully functional with smartphones and other touchscreen devices where finger sliding becomes an issue. But the MIT media lab is working hard to solve those issues and is optimistic that the device will be available and affordable to the public in the near future.