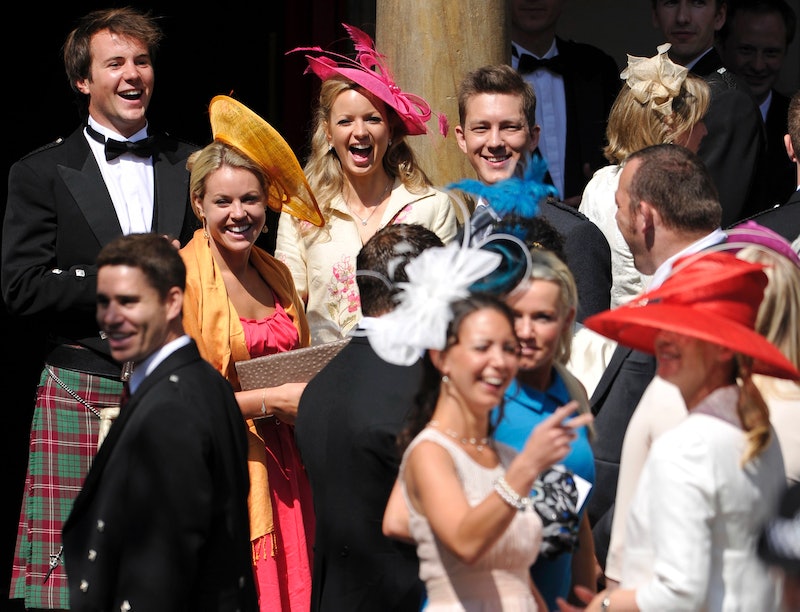 Last year, TheKnot.com (part of XO Group Inc.) surveyed approximately 13,000 American brides and grooms who were married in 2013. The results, compiled into their Real Weddings Study, revealed some staggering figures.

Did you know, for example, that the average cost of a wedding nowadays is nearly $30,000? (And that doesn't even include the honeymoon.) Invitations alone can run around $500. And the cake? That'll be another $500. On average, flowers and decorations amount to over $2,000. Same goes for the band and the photographer.

Here's another factoid: The average amount of money that a bride spends on her wedding dress is $1,281. That's a slight increase from 2012's average of $1,211, and definitely more than what most of us are paying in rent.

What these numbers tell us is that weddings are not cheap, so if you're invited to one, you should put in some effort, too. That not only means RSVPing on time, sending a gift from the registry , and trying not to get too wasted at the open bar, but also showing up dressed appropriately — no matter how many eligible single folks are alleged to be there.

Since we're in the thick of wedding season, how about a quick refresher on wedding dress code etiquette? I reached out to our friends at The Knot for their expert advice, and here's what some of their editorial staff had to say on the subject:

1. There Should Only Be One White Dress In The Room

If there's one way not to dress at a wedding, it's wearing white (or ivory or champagne, for that matter). While not all brides are wearing white these days, it's better to be safe than sorry. "Don't take any chances wearing a white dress (no matter how casual it is), unless the bride specifically asks guests to wear white," says Ivy Jacobson, an assistant editor at The Knot. "Save it for another fabulous summer party!"

2. Remember The Rule of One

Showing too much skin is another faux pas at weddings. Despite how awesome you look and however many hours you've spent toning and tanning, the bride is going to want all eyes on her. That being said, it's OK to accentuate your favorite asset. "[Your outfit] can have one sexy element like a plunging neckline, short hemline, cutout, low back, or a body con fit, but no more than one," says Simone Hill, assistant editor at The Knot. "It's a different story if you're hitting the club, but a wedding is not the club, no matter how low you're planning to get on the dance floor."

"Cleavage is not an accessory," says Rebecca Dolgin, The Knot's Editor-In-Chief. Let's leave it at that.

You've marked the date on your calendar, booked a room at the recommended hotel, and made your travel plans, but did you notice where the wedding is going to be? I'm not talking about the city, but the actual venue. Paying attention to these details should hopefully answer any questions about what you should wear. "Look to the invitation for clues like 'semi-formal,' 'beach chic,' or 'black tie,' but read between the lines," says Lauren Kay, The Knot's style editor. "If the ceremony is at a church, you'll need a pashmina to tone down your barely-there backless dress. If you're still stumped, ask yourself this: If you met anyone tonight—your grandmother's second cousin, the man of your dreams, a future employer—would you want to be wearing that dress?" I think the last part of this tip is good advice whether you're at a wedding or not. It's a small world, after all.

This next tip, also from Hill, is one that I'm sure most of us have never thought about, but it's something to be aware of nonetheless. "As far as color goes, I actually try to avoid any solid color dresses in popular colors like coral, purple, navy, and gray, for fear that I'll accidentally match the bridesmaids and then everyone will ask if I'm in the bridal party when I'm not," she says. "This one is a little overly paranoid, but I really like prints and bizarre colors anyway, so it doesn't limit me too much." It could be hard to avoid matching the bridesmaids if you don't have intel on their dresses before the wedding, but Hill suggests that "another way to avoid this is to add a belt or crop jacket to a dress so that it doesn't look bridesmaid-y if you're not in the bridal party."

6. Better To Be Over-Dressed Than Under

There'll be plenty of opportunities to wear flip-flops and cutoffs this summer, but a wedding is not one of them. "If the invite wording says the dress code is 'casual,' that still means absolutely no jeans, shorts, or tank tops," says Samantha Roberts, The Knot's assistant editor. "Think a summer sundress or a pair of nice pants and blouse!"

This next tip comes from Jamie Miles, The Knot's assistant managing editor. She emphasizes some of the earlier points and reminds us that there are going to be a ton of pictures taken during the night — either by a professional photographer or via guests' smartphones — so it's important to dress appropriately. Let the bride stand out in her wedding photos. "If you're attending a black-tie wedding, it's particularly important to go long and whatever you do, don't wear a super short, leggy cocktail dress," she says. "You don't want to steal attention from the bride, or show too much skin in the formal photos."

8. Have Confidence In Yourself

It's not your day, but that's no reason not to be yourself. If you try to stick to some of the guidelines above then you should be all set. Hill offers one last piece of advice: "It's really a balancing act of being yourself and looking and feeling confident while not terribly offending anyone."