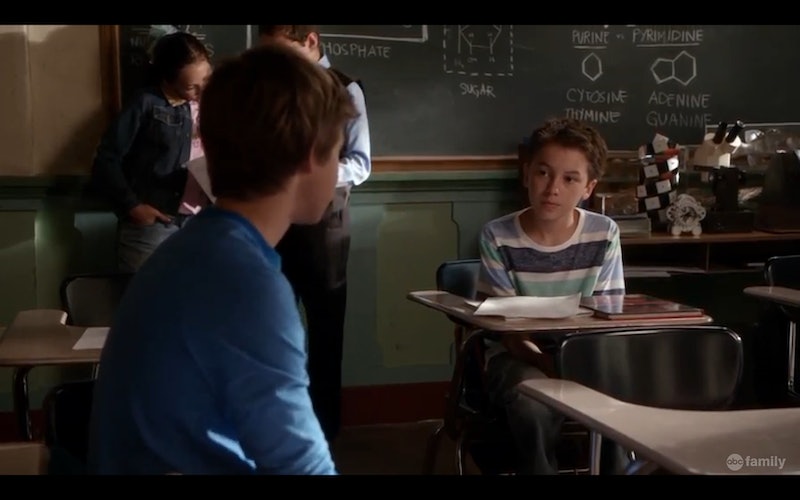 There might be hope for this storyline after all. Over the past few weeks The Fosters asked, "Is Jude gay?" in an unsatisfactory, outdated way. And last week's Fosters episode, "Say Something," made it seem like Jude's sexuality was going to fall by the wayside of his insecurities about Callie meeting her sister. However, thankfully, it won't. In a new promo for Monday's "Truth Be Told," Jude's LGBT storyline is coming back thanks to an unlikely character — Connor. So maybe The Fosters will actually give Jude the attention he deserves.

It's been a disappointing few weeks for Fosters fans — mostly because we've been forced to realize that the series really doesn't work on developing Jude. With the reintroduction of the question of Jude's sexual orientation, The Fosters reminded us that Jude's LGBT storyline began in Season 1, but was forgotten, unjustly, in lieu of Callie and Brandon's romantic entanglement. And what was even more upsetting than the fact that they'd brushed it under the rug once and brought it up again with a weak storyline in Season 2, was that it seemed like they intended to bury it under Callie's new relationship with the Quinns now.

When Jude fell silent during last week's episode, it seemed like the show and his family were attributing it to him feeling insecure and left behind by Callie's interest in her new family. Which, I'm sure contributed to his lack of speech a bit. But Jude's going through a lot of things right now — one of which is Connor's dad's accusation and whether or not that is how Jude feels. So, no, this isn't all about Callie (shocking, right?) and it's unfair to make it seem that way. Because even though Jude clings to Callie, he's an individual with problems and growing pains of his own — the greatest and most important of which is his sexuality, like any teenager.

I'll admit that I didn't foresee Connor being much help to Jude after his dad's accusation. Even when he snuck out of his house to come hang out with Jude during Brandon's party. But, in this promo for Monday night's "Truth Be Told," Connor's going to keep the ball of Jude's LGBT storyline rolling and that's important.

Connor is putting himself in a position where fans can trust him to stand by Jude and have his best interests at heart, regardless of his father's views on sexual orientation. More importantly, by confessing his dad's comments to Lena, he's bringing Jude's LGBT storyline back to the forefront. And, hopefully, he'll make her realize that perhaps she wrote Jude's questions off too soon in Season 1, just like The Fosters did.

It's about time that the show give Jude's sexual orientation the same attention it gave Jesus when he couldn't decide what to do about his relationship with Lexi, Mariana when she thought it was a great idea to put her underwear in some guy's hand, and Callie and Brandon with their forbidden love. Season 2, so far, has introduced a storyline about sexuality for each of these characters, which, if the past is any indication, will find resolution. So now that Jude isn't a little kid anymore, it's time to take him seriously as well and Connor's confession on Monday night will push Stef and Lena to do so. Finally.