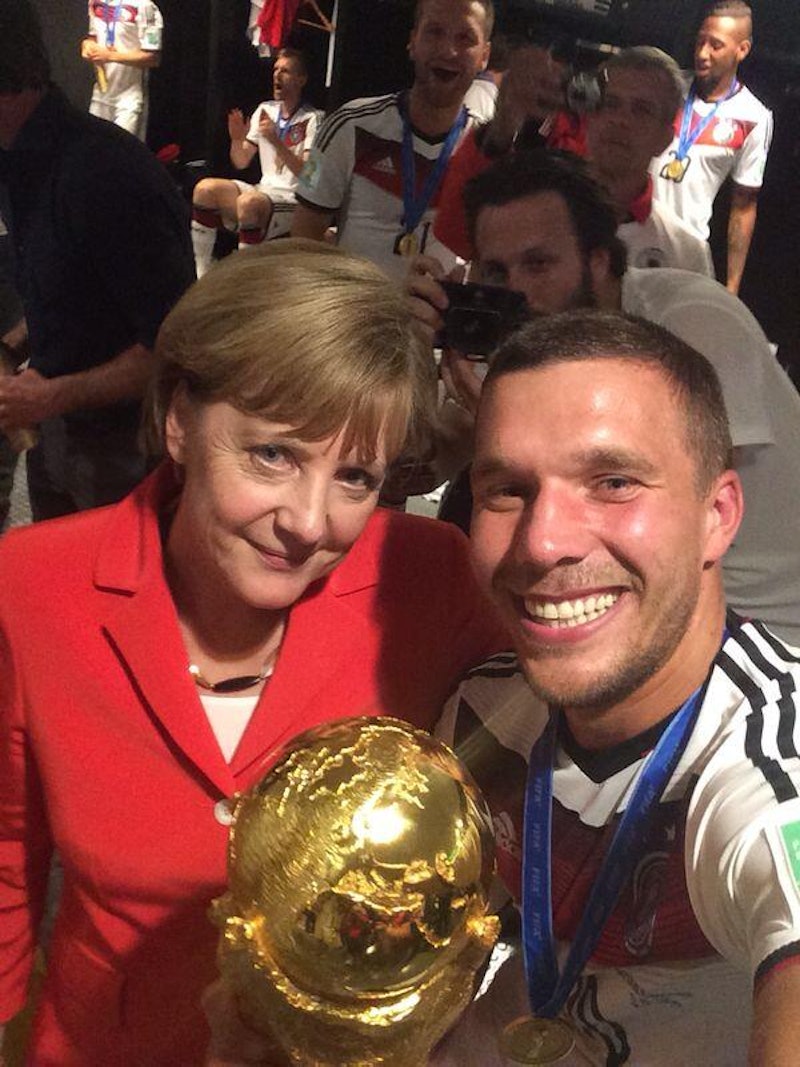 The World Cup may be over, but at least you can get excited about these Angela Merkel selfies with Germany's Lukas Podolski. Germany beat Argentina 1 to 0 in the second bout of extra time in the World Cup final on Sunday thanks to a well-placed kick from Mario Götze, who scored the winning goal. As we've documented, Angela Merkel kind of won our hearts throughout the game. But the best moment may have come after, when the chancellor of Germany started snapping selfies left and right.

Seriously, she gave President Obama a run for his money. (Remember the McKayla Maroney photo? Maybe not strictly a selfie, but still a model of the form. Forget that Obama's team has since considered banning selfies.) The chancellor is a selfie pro.

Really, Merkel's latest selfies demonstrate that the often-stoical politician can let loose and have fun when the occasion calls for it, which this certainly did. And in fact, she's actually been honing her selfie skills throughout the World Cup. Turns out Merkel snapped a selfie with Lukas Podolski at the start of Germany's run to win the Cup, which made his selfie with her on Sunday all the more meaningful. As meaningful as selfies can be, anyway.

1. The Selfie That Started It All

This one rocketed Podolski and Merkel into selfie-taking fame.

2. The Other Selfie That Started It All

Version 2, with thumbs up this time. But though these two are a model of the art form, they're not the only star of this genre. Let's take a look at Merkel's other impressive selfie-taking moments by way of comparison.

Merkel and Podolski bring their love full-circle post-final, with Germany as champions.

Here's Merkel with German olympian Claudia Bokel, who took a page out of Podolski's book.

Merkel's been working on this skill for some time now.

This one's my personal favorite. Everything about it is pretty much perfect.

Now here's a selfie that should've broken Twitter. If it had actually happened.

And to cap it off, here's a pic of Merkel checking her Instagram. Probably, anyway.