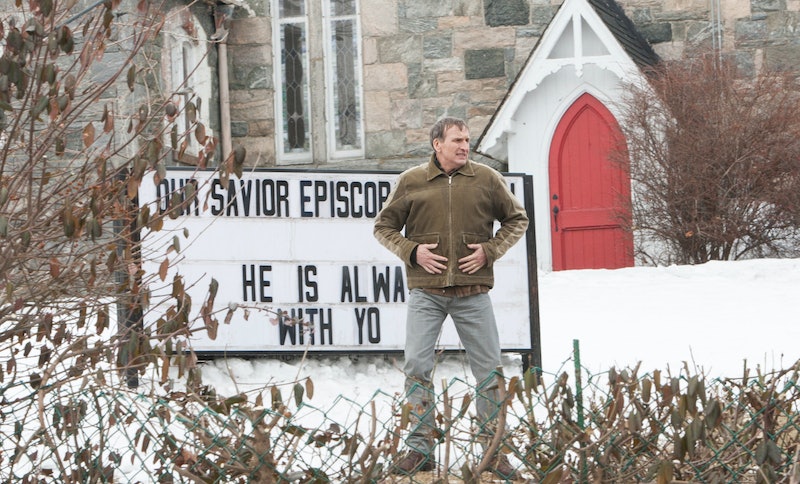 We knew from Episode 1 that The Leftovers wasn't exactly about the Rapture. But on some level it was. How else could we explain all those missing souls? What else could have stolen lives so quickly? This isn't a science fiction series, so clearly, the hand of God had to be involved. But as each episode unfolds, it becomes more and more clear that we're not answering to God in this post-Departure world. The Leftovers is a horse of a completely different color.

This week's episode, "Two Boats & a Helicopter" departs from the tried and true formula of following Justin Theroux's police captain Kevin Garvey through the post-Departure world, with vignettes from his wife Laurie, daughter Jill, and son Tom. Instead, we are focused on Mapleton's preacher, Matt Jamison (former Doctor Who doctor Christopher Eccelston) and his journey to restore his church. Since the Departure, faith has dwindled and the church has fallen on hard times; he's about to lose the building. But he has a plan.

Matt gambles some money that was left to him in Kevin's father's backyard (where Laurie also happens to be hanging out, wistfully remembering her life with Kevin) and turns it into enough money to save the church. Only, before he can get the money to the bank, he assaults and (likely) murders a fellow casino patron who tries to steal the cash. Later, he witnesses two members of the Guilty Remnant being attacked by men in a jeep and when he gets out to help them, those men take him down too. He spends the next few days in the hospital and wake up too late to buy the church back from the LLC who scooped it up.

As it turns out, that LLC is the GR and they're already painting it white and making it their own. The church has literally been reclaimed by this new reality. The GR insists that the world is no longer the world after the Departure and it's really starting to look as if that's true. But what's more is that Christianity, the religion that supposedly predicted this rapture or departure, is crumbling too. Matt has worked endlessly to prove that the happening wasn't the Rapture because its victims weren't all good (his sister's husband was cheating on her, one man abducted a young girl, another was a judge taking bribes). Matt tried to strip the event of its religious significance and in doing so, neglected the actual church and the home of his waning religion and watched as that was lost too.

In a sense, religion as we know it has been removed from The Leftovers, making it more clear than ever that while this series is about what people would do if two percent of the world mysteriously vanished, it's not about the Rapture. But we already knew that.

Even if The Leftovers came out and told us: "The Departure was the Rapture predicted by the Bible," that still wouldn't be what this show is about. At its core, The Leftovers is about humans and the various ways in which they react in times of extreme crisis.

Lucky for our existential journey, The Leftovers just so happens to be dealing in circumstances that no person on Earth has ever experienced, which means the journey we're on can shoot off in a thousand different directions and bloom into any variety of consequences. And while it's fun predicting outcomes of dramatic series and finding that we were correct, it's just a little refreshing to know that none of us has a damn clue what humans would do in the situation of those desperate folks on The Leftovers. Anything and everything is possible.

Bring it on, HBO.