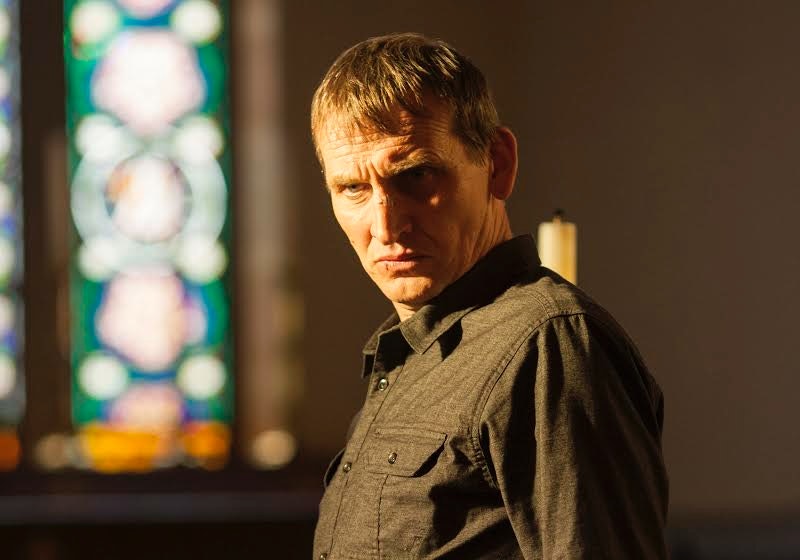 I should start by saying that gambling gives me anxiety. Even watching other people gamble. Even watching fictional other people fictionally gamble. When the stakes are high and some desperate soul is trying to gamble his or her way to riches and their hope's desire, I start to need my inhaler and maybe a brown paper bag to breathe into.

By this measure, last night's episode of The Leftovers was one of the most stressful viewing experiences I've had in a long time. After two weeks of focusing on our apparent leading man, Kevin Garvey, this week's episode, “Two Boats and a Helicopter," focused on the town's preacher, Matt Jamison. You'll remember him as the man who is constantly preaching to passersby, not unlike a crazy homeless person, about how the Departure was not (like, capital N-O-T NOT) the Christian Rapture. His reasoning? Because so many of the people who left were bad. Unfortunately, Matt's focus on preaching the anti-Rapture means he wasn't preaching much else and attendance at his church dwindled to almost nothing, causing the building to go into foreclosure and allowing an unnamed LLC (who turns out to be the Guilty Remnant) to buy it up. As such the episode focuses on Matt's quest to earn, in one night, the money to buy back his beloved church. Now, let's relive that journey, along with my crippling anxiety.

Step 1: Go find a suspicious wad of cash someone left for him hidden on the GR's property.

Matt goes to the house in the middle of the night, only to run into Laurie, who is sitting on the swing, smoking. She apparently isn't supposed to be and agrees not to tell on him (write a note on him?) if he doesn't tell on her. He moves the old grill, opens a secret door it's been hiding, and pulls out an old JIF jar full of money and a note for Matt.

Anxiety level: On a scale of 1-10, this only had me at a benign 1. I had no idea yet that gambling was going to take place. For all I knew, the choosey mom who left Matt the money had left enough for him to buy back the church.

Step 2: Drive to the casino.

But first, Matt has to stop at a light that starts blinking. It makes for a nice visual transition when we get to the blinking light at the casino, but I was really worried his car was about to get hit by a semi or a train or something awful.

Anxiety level: 3. It might not have been gambling, but I'm not heartless. Also, by the end of the scene, we transition to the casino and I knew what was to come.

If only we were talking about Doritos here. But we're not. Alas. Alack. Etc. Matt goes to trade in his cash for casino chips and, after saying the denomination doesn't matter, ends up with a small stack of yellow plastic that represents the $20,000 he brought in.

Anxiety level: 5. SUCH A TINY STACK. HE'S GOING TO PLAY IT ALL AT ONCE.

Matt's game of choice is Roulette. He goes to the nearest table and puts down the entire stack (!!!) on red. The guy running the table tries to direct him to the high-stakes tables in the back, but he insists that he wants to play on THIS. TABLE. A scary-looking man with a headset okays it and it's time to get going.

Anxiety Level: Riding strong at a 5.

Matt leaves all of the money (ALL OF IT) on red and tells the spinny guy (can you tell that I don't hang out in casinos?) to spin again. It's a success. He doubles his money again. $80,000.

Anxiety level: 7. PLEASE FOR THE LOVE OF GOD, TAKE SOME OF THE MONEY OFF THE TABLE WHERE IT CAN ALL BE LOST AND YOUR DREAM CAN DIE. PLEASE. (He doesn't listen, even though I may have said this part aloud — it's all a blur.)

You guessed. Leaves it all on the table. Scary guy radios someone and then nods to say it's okay to bet horrendous amounts of money on spinning a ball around a wheel. A sleazy couple are watching him play now. The guy is cheering him on, the girl puts $100 on black, saying it's "due." Matt has the spinny guy do his thing again and doubles his money. $160,000.

Anxiety level: 9. At this point I was basically losing my shit since I knew something bad was bound to happen. I'm not sure if that's how probability works in Roulette, but it's definitely how it works in dramatic television. When he didn't lose, I actually became more anxious, since that meant he was probably going to die.

Matt leaves after that, having enough to save his church, and cashes out. The casino gives him his winnings in a conspicuously large envelope that just screams "HEY, STEAL ME, PLEASE!" The creepy couple from the Roulette table hears the call of the cash and the man approaches Matt at his car and roughs him up for the money. Being a man of God, however, Matt doesn't stand for that sh*t and promptly beats the creepy man (probably) to death to get the cash back. You don't mess with a holy man who has resorted to sinning to save his church. You just don't.

Anxiety level: 10. It really did look like he might die then. It was a miracle that he made it away from the casino with the money and his life.

Matt returns to the GR house to put back, presumably, the $20,000 he used to start his gambling run. Then he drives off, triumphant, to get his church back.

Anxiety level: 7. I was feeling better, what with not being at the casino anymore, but I was still really sure he was going to get hit by a large vehicle and die.

When Matt sees a member of the GR injured by someone throwing a rock from a moving car, he stops to help them and even calls for an ambulance. He's in the middle of his 911 call when the same asshole circles back and hits him with a rock, knocking him out cold. After a trippy-as-all-get-out dream sequence, he wakes up in a hospital and rushes to get the money to the bank to save his church. He makes it just after closing time and begs the guard to let him in. When he finally gets to the banker handling his case, he's told it's too late. He had until end of day to get the money, but that didn't account for his brief coma. He was out for three days and the deal has already closed with the new owners: The GR.

Anxiety level: 4. Surprisingly, Matt's near-death and actual loss of the church, by the time it happened, barely fazed me, since I spent the better part of an hour ready for him to lose it all, be killed by creepy white trash gamblers in a parking lot, and be hit by all manner of semi truck on small suburban streets.

That was way more stressful than when the baby disappeared in the pilot.