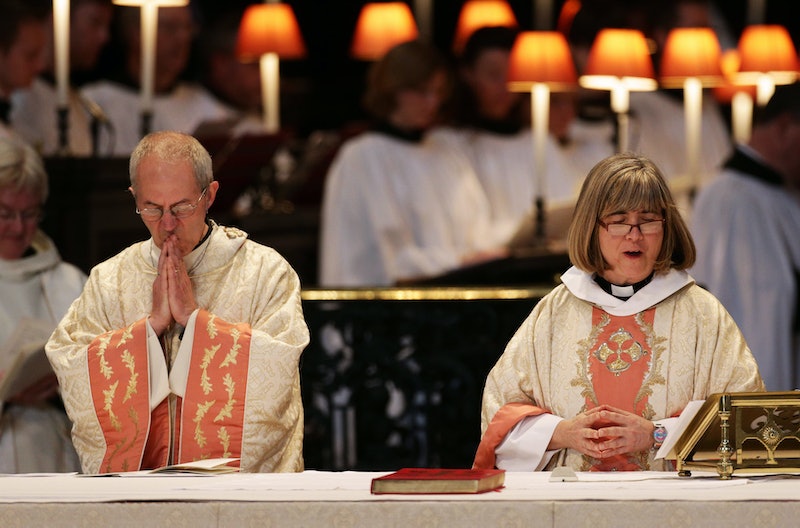 The Anglican hierarchy may no longer be a boys' club — in fact, you may be looking at a new class of women bishops by the end of 2015. Leaders of the Church of England voted to ordain women bishops Monday, marking the second time the church's legislative body, the General Synod, has discussed the issue. Although the proposal for female clergy was previously blocked in a vote, many Anglicans were confident the issue had unparalleled support — and it's about time.

"I think we look ridiculous," Meg Gilley, a female clergy member at the Durham Diocese, told Al Jazeera. "God has been calling us on this road for a long time, and we need to get on with it."

According to The Telegraph, the vote was overwhelmingly in favor of women bishops. However, the proposal won't be formally passed until two other votes are completed Monday afternoon.

The General Synod, which is composed of clergy and laypeople from the 43 dioceses in England, debated allowing women bishops at its annual meeting. According to BBC News, those in favor of the ordination of female bishops were hopeful because four members who vetoed the proposal in 2012 have since changed their minds, including Chair of the House of Laity Philip Giddings. He reportedly called the revised proposal — which includes an amendment that allows more traditional dioceses to opt for a male bishop if their members are uncomfortable — "a new culture" for the Church of England.

The ordination of women is a testy topic in most religions — especially those steeped in centuries- or millennia-spanning tradition. But the Church of England has been more accepting of women's ordination than a number of Christian denominations, including the Catholic and Mormon churches.

But it seems like women continue to join the ranks at steadily increasing pace: In 2009, the church ordained 266 women out of 564 new clergy; 116 women were given full-time status, compared to 193 men.

However, the Church of England still lags behind churches in its own Anglican community. The Episcopal Church in the United States, which is a member of the Anglican Communion, has been ordaining women as bishops since the late 1980s, while the Anglican Church in Canada ordained its first female bishop in the early '90s.

Because of the worldwide push for modernity in the Anglican Church, people were shocked when the General Synod rejected women bishops two years ago. Just several months before the vote, a ComRes poll found that 74 percent of Britons supported the ordination of women bishops.

But England may be more divided than what the polls lead us to believe. Unlike the Catholic Church, where its hierarchy is overwhelmingly in favor of preserving the all-male tradition but its modern laity leans toward the ordination of women, the Church of England faces most of its opposition from the laymen.

When the female bishops proposal was first put to vote in 2012, it passed by more than 70 percent. However, the General Synod requires a two-thirds majority in both the laity and clergy houses; the clergy voted in favor of women bishops, while the laymen was just six votes short.

A conservative laity group called Reform has also been increasing its presence over the years. Its members are outspoken opponents of the women bishops measure because it goes against biblical teaching.

Here's how Reform outlines some of its biblical points:

Men are to exercise "headship" in the family — whether it is the domestic family or the church family.

Such headship encourages the full ministry of women — but reserves the exercise of authority over mixed congregations to men.

Still, it seems like the General Synod would not only like to make amends for its past vote, but also show that the Church of England can embrace modernity. As he opened up Monday's debate on the ordination of women bishops, the Bishop of Rochester Rev. James Langstaff urged his fellow members to remember that they're serving a greater community:

Wherever each of us stands on the spectrum of views, I want to suggest today that we have a responsibility to be guided, yes, by what we ourselves think, but also by what we assess to be the settled view of the great majority within the Church of England. And that means weighing carefully what the consequences would be for morale within the church and for our witness in the nation if the legislation were once again to fall, and we were thereby seen as frustrating the view of our wider Church.