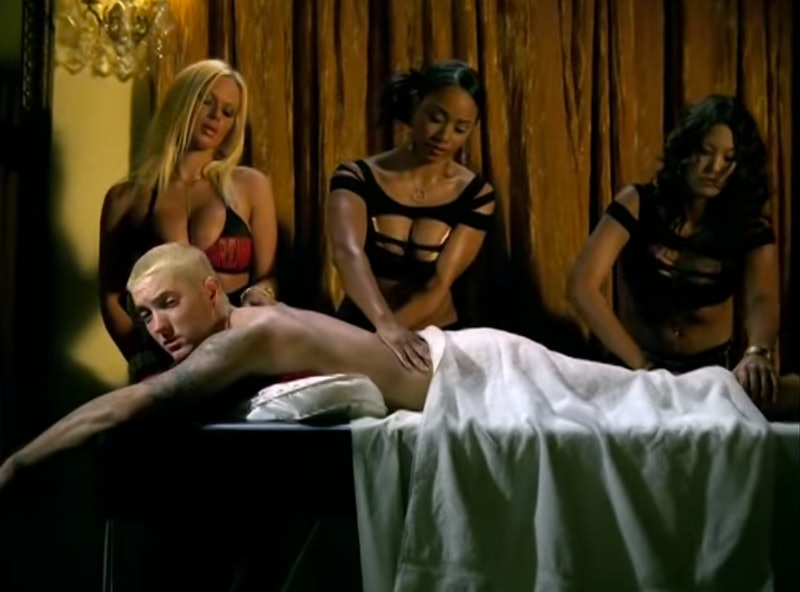 Admittedly, some songs were worse about it than others — especially rap and hip hop songs. Generally, in that genre, we used to have to consider it a victory when women weren't referred to as bitches or side chicks or other such delightful monikers. However, there are still some songs from the early '00s that kind of leave a bad taste in your mouth once you listen to them again now that you aren't a kid anymore, and not just because you're finally getting to listen to the song uncensored. From poor messages to poorly worded lyrics, here are nine songs from the early '00s that weren't as feminist-friendly as they could have been.

Worst Line: "How you can grant the woman access to your villa? Trespasser and a witness while you cling to your pillow. You better watch your back before she turn into a killer."

Reason: There are a couple of verses near the end in which Shaggy says he's not going to take his friend's advice and that he plans to apologize, but since most of the song is about lying to your girlfriend about cheating and avoiding her murder attempt, it's still pretty sexist.

Worst Line: "You've got no choice, babe, but to move on, and you know there ain't no time to waste. You're just too blind to see, but in the end you know it's gonna be me."

Reason: 'N Sync might have been the greatest boy band ever, but re-listening to this song makes you realize it's actually about some guy who doesn't care that a girl needs time to heal from her last bad relationship and is convinced they'll end up together. Thanks but no thanks, Justin Timberlake.

Worst Line: "Feminist women love Eminem: 'Slim Shady, I'm sick of him. Look at him, walking around grabbing his you-know-what, flipping the you-know-who.' 'Yeah, but he's so cute though!'"

Reason: It was hard to just pick one Eminem song, honestly. This was one of the songs that catapulted him into the mainstream and he hasn't gotten much less misogynistic with time. After all, The Real Slim Shady came out before his hate song about his mother but after the song about murdering his wife.

Worst Line: "But I'm not every girl and I don't need no G to take care of me. 'Cause shorty's got a job, shorty's got a car, shorty can pay her own rent. Don't wanna dance if it is not in my heart, oh, most girls."

Reason: I hate to be the one to break it to 2000 Pink, but most girls want real love. Implying otherwise was pretty sexist. If she had said "some girls" or even "some people", this song wouldn't be so bad, but "most girls" aren't as shallow as this song would make you think.

Worst Line: "Now I'm not trying to be rude, but hey pretty girl I'm feeling you. The way you do the things you do remind me of my Lexus coup. That's why I'm all up in your grill trying to get you to a hotel."

Reason: Obviously, the next time you meet a pretty girl you should immediately try and talk her into bed instead of, you know, just talking to her. The entire song is basically about boys meeting girls and having sex with them immediately, but, um, at least it's catchy?

Worst Line: Any part of the song that LL Cool J sings.

Reason: J. Lo was breaking up with the guy making her feel like crap in this song, which is good, but letting him get any last words in the song kind of ruins the effect a bit. In fact, he really should have stopped singing halfway through as she moved on from his toxic influence.

Worst Line: "I hope she's speeding on the way to the club, trying to hurry up to get to some baller or singer or somebody like that and try to put on her makeup in the mirror and crash, crash, crash into a ditch."

Reason: Look, we all know a Caroline, but jokingly wishing death on her isn't really the best way to deal with Carolines or gold diggers or both. Not even Kanye West went that far in his song "Gold Digger".

Worst Line: "All the chicks start yelling, all the hot babes. Throw their bras and their shirts and their panties on stage."

Reason: Eminem is involved, which tells you all you need to know. Just the fact that women are referred to as chicks throughout should have been a clue. The song's a parody of the fact that Eminem was considered the face of D12, but sadly it wasn't a parody of Eminem's misogynistic attitudes. Those were pretty straightforward.

"Are You Gonna Be My Girl?"

Reason: If you're out at a party with a guy you like, get ready for Jet to feel they have the right to slide right past your "get back stare" and ask if you want to be their girl. It's another catchy song with a pretty stalkerish message, but things could have been worse, I guess.

More like this
The Spice Girls Just Dropped A Brand New Music Video
By Sam Ramsden
The Best 'Grey's Anatomy' Intern Moments, From MAGIC to Glasses
By Grace Wehniainen
A New Scooby-Doo Movie Confirmed Velma Is Gay & Twitter Is Pumped
By Radhika Menon
Lindsay Lohan & Jonathan Bennett Celebrated Mean Girls Day Very Differently
By Jake Viswanath
Get Even More From Bustle — Sign Up For The Newsletter