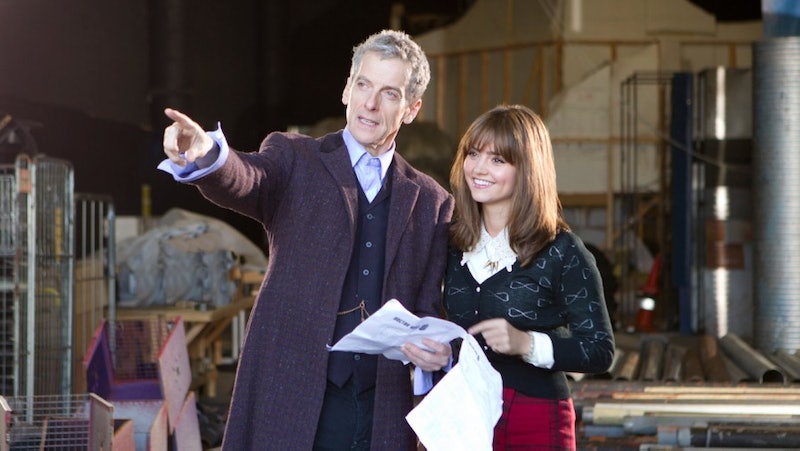 BBC released a real trailer for Doctor Who season 8 yesterday, and it's awesome for a few reasons:

Now, the clothes in question belong to both Clara and the Doctor — looks like Clara will be back to her standard fare of cutesy ModCloth-esque dresses paired with leather jackets and boots for a touch of edge. And the Doctor? Looks like he's eschewed his purple tweeds (and rather heartbreakingly, if you think back to the Christmas Special, his bow tie) in favor of a simpler navy overcoat, with a flashy red silk lining, paired with a white shirt and black slacks.

But back to Clara: in honor of the new trailer, let's do a little style retrospective of her ten best outfits (it's actually quite a challenge, seeing as pretty much every single thing she wears on screen is adorably stylish). Geronimo!

She keeps her Christmas-y red plaid skirt and lacy collared shirt from veering too twee with a spiky necklace.

9. The Bells of Saint John

Clara loves a good mullet dress, and she's styled this one impeccably by adding an army green parka and shearling lined moto boots.

8. The Rings of Akhaten

Another day, another mullet dress. This one's paired with a black leather jacket and more moto boots, as well as an adorable red satchel for a pop of color.

7. Some Episode from Season 8

We may not know much about season 8, but we do know that Clara will be as well dressed as ever, in her signature vintage-inspired dresses and black tights.

6. A Nightmare in Silver

Clara sure knows how to work a structured jacket with a printed dress! Also, a mace never makes a bad accessory.

5. Journey To the Centre of the TARDIS

Sequins and a Peter Pan contrasting collar? Add that to the fact that she paired the outfit with brown boots and a sideswept hairdo, and you've got yourself a total win.

4. The Name of the Doctor

Clara returns to plaid in this completely adorable outfit. Maybe it's just me and my slight jumper obsession, but I love this dress/black shirt combination.

3. The Asylum of the Daleks

Clara's alter ego Oswin rocked a bodycon look that I have a feeling present-day Clara wouldn't be caught dead in. That said, she pulls off the futuristic space girl aesthetic very well!

Speaking of Clara's alter egos, Victorian Clara might just be the best dressed Clara of all.

More like this
Neil Patrick Harris Will Play 'Doctor Who's “Greatest Enemy” Yet
By El Hunt
David Tennant Will Have A New Villain To Battle In His 'Doctor Who' Return
By Frances Stewart
35 Ideas For 4th Of July Nails That Go Beyond Red, White, & Blue
By Audrey Noble
23 Times Meghan Markle Dressed Just Like Princess Diana
By Bustle UK
Get Even More From Bustle — Sign Up For The Newsletter