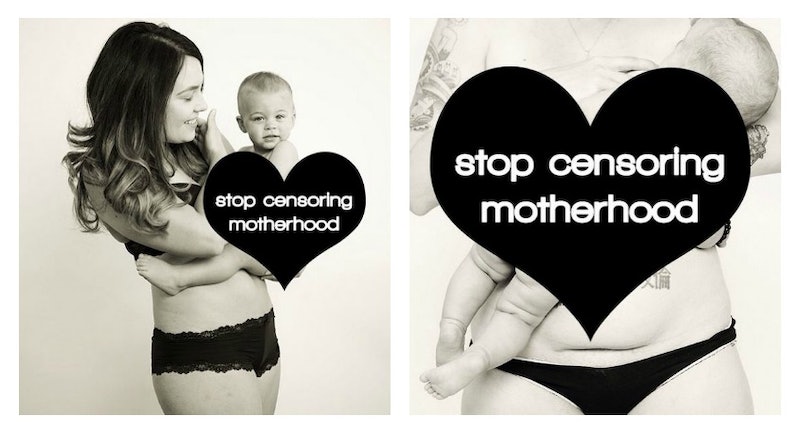 When Ashlee Wells Jackson and Laura Weetzie Wells started the 4th Trimester Bodies Project in June of 2013, it was an effort to process a traumatic pregnancy. Jackson, a Chicago-based photographer, gave birth to twin girls, Nova and Aurora, in 2012. She sadly lost Aurora from complications of twin-to-twin transfusion syndrome, leaving her struggling with what she called the “strangeness” of her new body — an experience from whence 4th Trimester Bodies came.

Dedicated to “embracing the beauty inherent in the changes brought to our bodies by motherhood, childbirth, and breastfeeding,” the project documents real women and real mothers, with no models, airbrushing, or Photoshop involved. The mothers may choose to pose with their children; they may not. But whether they pose alone or with their kids, the images celebrate motherhood in all its messiness, normalizing the bodies motherhood gives us and spreading a message of body positivity. The photographs are unapologetic, which is just as it should be; they don’t, however, reveal nipples or genitalia, and only very young children (under the age of three) are posed without clothing. Even so, the partial nudity of the images has lead in numerous cases to Facebook and Instagram removing them from their respective social networks in accordance with their rules.

There’s just one problem: Those rules don’t seem to apply to everyone.

According to the Huffington Post, Jackson has had the Instagram and Facebook accounts for the project shut down time and time again, citing violations of the community guidelines for each network. But while the powerful and positive images of the 4th Trimester Bodies Project find themselves held strictly to those guidelines, others are allowed to stay: Celebrity bikini photos, photos sexualizing and objectifying bodies, photos that all conform to a specific and narrow image of beauty.

Clearly something is wrong here, so in response, Jackson has started the #StopCensoringMotherhood movement. The 4th Trimester Bodies Project is “meant to heal and empower women, worldwide, and we’ve started to do that,” she told TODAY.com. “And not being able to publicly and socially share our work and our message that is helping and healing so many women, is damaging.”

To be clear, the problem isn’t that the “no nudity” rules exist, or even that images are being removed because of them. The problem is the fact that the censorship is selective. As Jackson said to HuffPo, “If they want their rule to be no nudity whatsoever, any nudity will get you banned, great. It’s their platform. They can make that rule, but then they need to consistently uphold that rule.” This would mean that every single one of the photos tagged, say, on Instagram with the hashtag #sxy would need to be removed. Jackson recently discovered this hashtag, which brings up over 60,000 explicitly pornographic images. If Instagram’s community guidelines state, “Don’t share photos or videos that show nudity or mature content,” then, well… the #sxy images definitely aren’t abiding by the rules. So why are they allowed to stay, while the 4th Trimester Body Project images are not?

We’ve been seeing this sort of selective censorship a lot lately, too — Megan Tonjes’ experience is one, for example, and the Coppertone Baby Facebook photo incident is another. To be honest, I kind of understand the whole Coppertone thing; while the image itself obviously isn’t sexual in nature, there’s no telling how predators will take it, especially if it’s made public or remains unsecured by safety settings. It sucks that we live in a world where we have to worry about that, but part of being responsible on the Internet involves keeping anything you wouldn’t want anyone else getting a hold of off it in the first place — and from a business standpoint, obviously Facebook and Instagram don’t want to be accused of the possession or distribution of child pornography. There’s no excuse for Instagram’s removal of Megan Tonje’s photo, though, given comparable images from other (often famous) users, and I don’t think there’s one for the censorship of the 4th Trimester Bodies Project’s images — images that have being doing important work in helping women through difficult times in their lives — either.

For their part, Facebook at least commented to the Huffington Post about the whole thing. When an image is flagged, a spokesperson said to HuffPo, an employee makes the call on whether to remove the photo or to let it stay. But, “it is very hard to consistently make the right call on every photo that may or may not contain nudity that is reported to us, particularly when there are billions of photos and pieces of content being shared on FB every day,” the spokesperson noted. This sometimes results in “content being removed mistakenly.” Instagram hasn’t responded to HuffPo’s request for a comment.

I’m not a mother myself, but I know that motherhood isn’t always pretty, and it certainly isn’t perfect. But it is its imperfection and messiness that makes it so remarkable — so please. Let’s #StopCensoringMotherhood.

More like this
How To Fight For Reproductive Rights, Based On How Much Time You Have
By Courtney Young
Kris Jenner’s Advice For Kim Kardashian Is Going Viral On TikTok
By Courtney Young
The Viral TikTok “30,000” Sound Fits Nearly Every Scenario
By Courtney Young
Meet The Disney Imagineer Bringing 'Guardians Of The Galaxy' To Epcot
By Charlie Mock
Get Even More From Bustle — Sign Up For The Newsletter