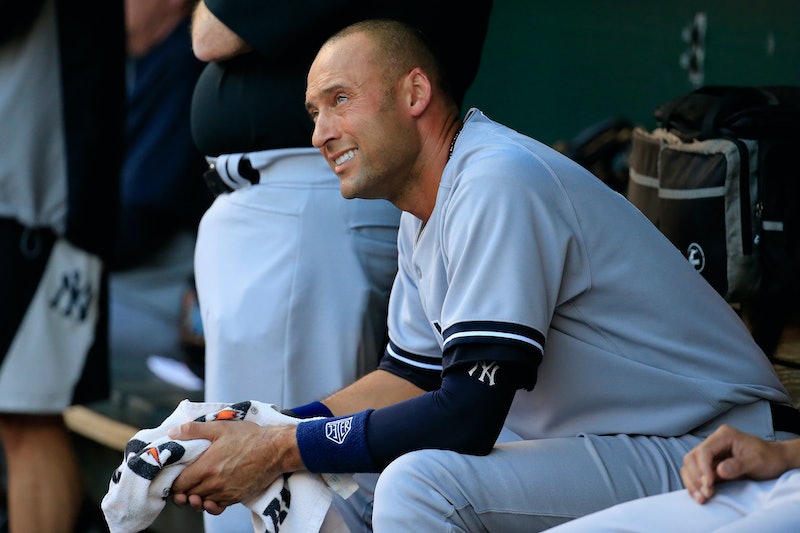 There's that famous line in the classic sports dramedy A League of Their Own that has been echoed on baseball fields since the film's release in 1992: "There's no crying in baseball." And with all due respect to Rockford Peaches coach Jimmy Dugan (played by Tom Hanks), there is plenty of crying in baseball. Namely, there's plenty of crying when it comes to baseball in pop culture. Case in point: the new, lump-in-the-throat commercial from Nike, which plays as a tribute to New York Yankees shortstop Derek Jeter. After 20 years with Major League Baseball, the Yanks captain is retiring and respect must be paid. And that's exactly what the ad — which should give goosebumps to any baseball lovers — does.

The star-studded spot — in which the tip of the cap is, quite literally, for Jeter and his historic baseball career — features appearances from fellow iconic New Yorkers like Jay Z, Billy Crystal, and Rudy Giuliani, as well as some of Jeter's former teammates like Mariano Rivera and his former manager Joe Torre. But the real thrill isn't the famous cameos from other sports behemoths like Tiger Woods and Michael Jordan, but rather watching Jeter's fans, as well as rivals like the Boston Red Sox and the New York Mets (their appearance is a particularly inspired moment) tip their respective caps and show their admiration.

It should turn any Yanks/Jeter fan into a blubbering mess (especially hearing the late Yankees announcer Bob Sheppard's recorded introduction), but really, any fan of baseball will get choked up at the message of the commercial: that this is a game that unites even the biggest rivals and that no matter which team you root, root, root for, you never underestimate the power of a living legend and hero of the game. Watch and weep:

No crying in baseball? Good luck with that. Of course, the new Jeter tribute from Nike isn't the only piece of pop culture that has made baseball lovers become a puddle of tears. Heck, even A League of Their Own is a guilty culprit. You'll definitely get emotional when Betty Spaghetti has learned her husband died in combat or choke back anger tears when the Racine Belles win the World Series (damn you, Kit), but you're heartless if you don't shed a few when the women get their due at the Baseball Hall of Fame.

You can take your pick when it comes to the moments in Field of Dreams that make you weep. While Ray's (Kevin Costner) catch with his deceased father at the end is the holy grail of sports tearjerker moments, it's Terrence Mann's (James Earl Jones) passionate speech about what makes baseball so great and the love of the game from the fans that gets the waterworks going.

The end-all, be-all of baseball weepies, The Pride of the Yankees pays homage to the life and career of Lou Gehrig (played by Gary Cooper). If you don't cry during the line "Today, I consider myself the luckiest man on the face of the Earth" when the ailing Gehrig addresses his fans during his farewell speech at Yankee Stadium... well, then baseball probably isn't really your sport, after all.

More like this
Watch Emma Raducanu’s Incredible Response To Her Early Wimbledon Exit
By El Hunt
Alicia Silverstone Has Recreated An Iconic 'Clueless' Scene
By Frances Stewart
The 'Hocus Pocus' Sequel Finally Has A Release Date & It Makes Total Sense
By Shannon Barbour and Radhika Menon
“The Door Is Always Open” For Another 'Breaking Bad' Spin-Off, Says AMC Boss
By El Hunt
Get Even More From Bustle — Sign Up For The Newsletter