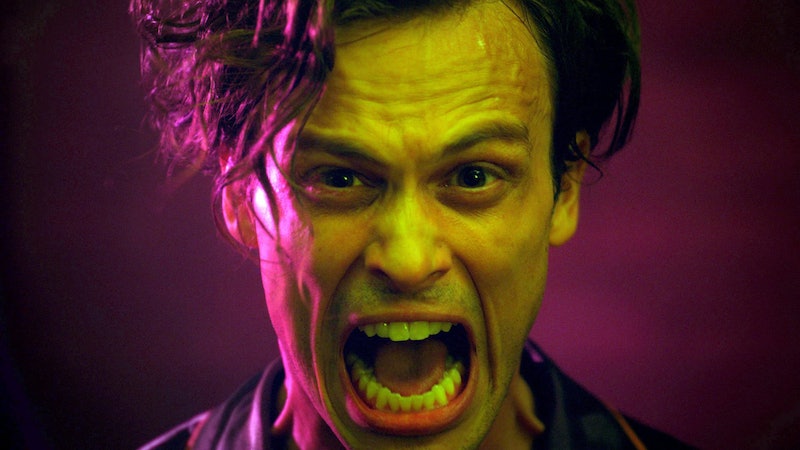 Why does suburbia feel like death to much of the youth of America? Particularly when you're slinking back home after promises of Real, Live Adulthood didn't live up to your dreamy pre-college days, when any and everything felt possible. Some would even go so far as to say that returning to Mom and Dad's feels like death. My bet is that the characters in the new film Suburban Gothic feel that way, and they're the latest in a long line to tackle just how that malaise really feels to our overeducated and underemployed generation. Starring Matthew Grey-Gubler and Kat Dennings, Suburban Gothic may be a comedy, but its trailer's emotional quotient is more akin to a death wish.

Because suburbia is equal to routine and utter monotony. Of self-preservation rather than exploration. Doing the same thing day-in and day-out without experiencing the new, the scary, the unknown: is there anything less like living than avoiding that which teaches us and gives us new experiences?

The unremarkableness of suburban life and how that feels to many a restless youth permeates film and television — Suburban Gothic is hardly the first. But it feels appropriate given our modern existential struggles. Suburban towns are hotbeds for this sort of wanton angst because the hypocrisies, conflicts, and characters involved in almost any small town are, by and large, the same everywhere. The crisis of existing in a place like this means a lack of those terrifying unknown things that shape us all outside of the routine that takes up the rest of life. "Life is what happens when you're busy making other plans," remember? So of course it is akin to being surrounded by death.

The idea of loneliness and isolation found when you don't fit the specific mold is particularly represented in the 2001 film, Ghost World, a story of two cynical loner girls living in Anywhere, USA, hoping to find that "thing" that propels their world forward; to alienate with the point of finding those in kindred spirits that one may actually, finally, create their own little community of friends and weirdos. For so many, the suburbs are a signifier of knowing what you want out of life: particularly if that want is family, stability, security, and status quo. So how are kids — particularly Ghost World's Rebecca and Enid — supposed to thrive in a place that won't let them discover what it is they're "for" because they only know what they're against?

That inability to express one's self because of expectations is heavily at play within the tragic story of The Virgin Suicides, too. Both a novel (by Jeffrey Eugenides) and a film (by Sofia Coppola), sisters sheltered and cooped up in a strict, suburban, religious household become a thing of lore — their desire for freedom taking them so far as to commit to actual, literal death. Because it was better than the alternative: being alive in the suburbs. Yet no one can understand their reasoning because to the folks of Grosse Point, Michigan, their lives were one of the ordinary doings and if it worked for them how could it not work for everyone?

Why is protection — rather than exploration — of the world and its experiences such a terrifying thought to the suburban mindset? Because it's restrictive.

Even in something as city-centric as Mad Men, we see how the suburbs are so often equated to death. Pete Campbell is perhaps the most rage-y when it comes to railing against such an existence — running away with many a leap and bound in his footing. His terror over becoming "boring" is what makes him exactly so, in fact. But so was Don Draper, given his whole, y'know, assuming the identity of another man and living his entire life as a do-over.

And to a lesser extent — but no less poignant — is Sally Draper's veritable fashion show of rebellious traits. As she tries on different exteriors, be it through fashion or cigarettes or friends or kissing boys with brazen glee, she overturnes and bucks against the status quo of suburbia with every slightly terrified but confident toe-dip. Raging against all that her mother so craves is part of her realization that maybe, just maybe, the suburbs are not for her. At least not yet and maybe not ever. And she is deadly serious about that.

Which is why when a character like Suburban Gothic's Raymond comes home to live with his parents after that good ol' American Dream fell through — right in the thick of understanding what life is — his seeing of dead people could be seen as metaphorical. Instead of being served cultural, emotional, and mental fulfillment and satisfaction, the suburbs are a metaphorical death. I mean, does a return to rules, order, and another person's way of life feel any other way, really? That sort of stagnancy and existence might make a person believe they are surrounded by the dead at all times: talking, interacting, and living in an existence where nothing ever changes, and a pre-determined way of life governed by a communal love of sameness is the only way. Because to some, that small life isn't a blessing so much as it's a curse.

And maybe for some people, it's okay to not want to go home again; to risk life in the name of living rather than preservation out of fear of death.

More like this
David Tennant’s Transformation In ITV’s 'Litvinenko' Is Astonishing
By Sophie McEvoy
Idris Elba "Breaks Out" Of London In 'Luther' Film First Look
By Sam Ramsden
Here’s Everything Coming To & Leaving Netflix In December
By Jake Viswanath
Yes, That's Lindsay Lohan's Sister Singing In The 'Falling For Christmas' Movie
By Radhika Menon
Get Even More From Bustle — Sign Up For The Newsletter