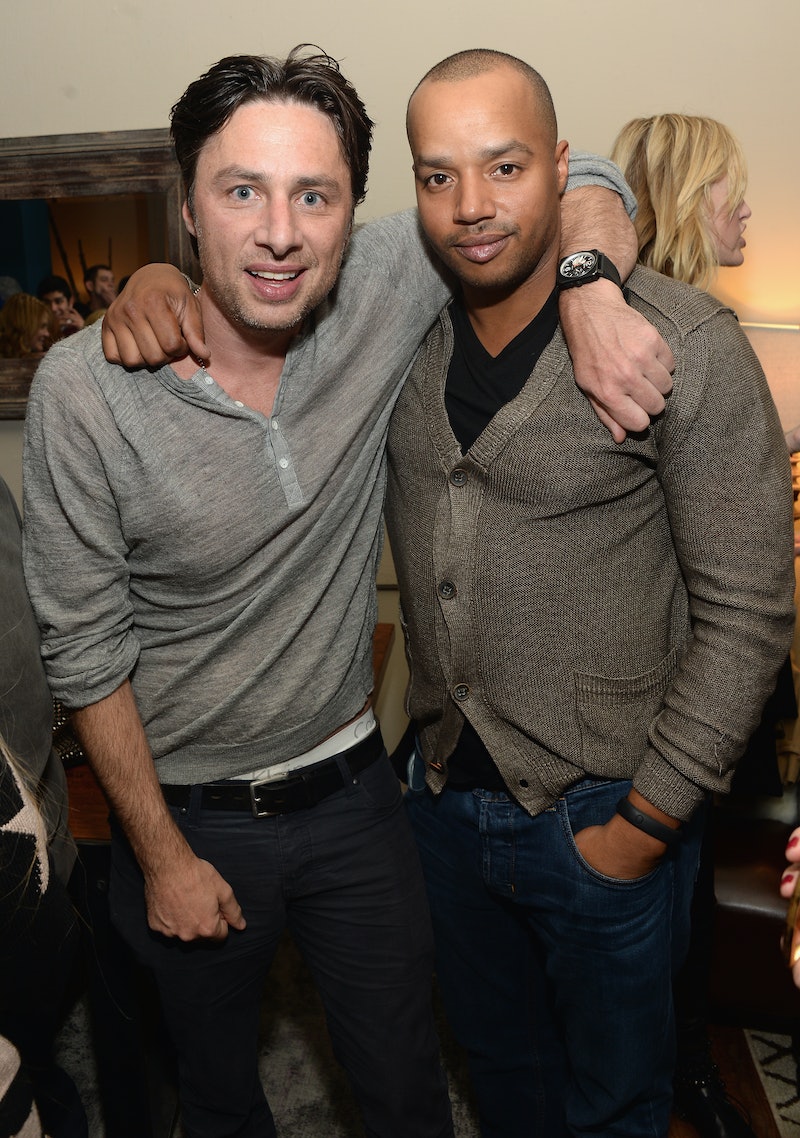 J.D. and Turk are the original dream team. Sure, there's been plenty of quirky relationships that have blossomed on the set of medical dramas before and since then, but it's Scrubs' Zach Braff and Donald Faison who won our hearts with their nonsensical non sequiturs and charming bromance since the series' first episode. But what's even more lovable is the fact that years later, the pair are still BFFs. Braff even went as far as to write Faison into his latest film, Wish I Was Here . The actor/director/producer/writer spoke to Bustle about his unwavering love for Faison.

"I just love Donald so much. He really is my best friend, he's so funny, he's so supportive of me. We crack each other up," Braff said, grinning from ear to ear. "He would tell you that I never write black people in my movies, so I told him that the Astin Martin dealer would be a Black guy," Braff said of the role he wrote with Faison in mind.

And while the role is a small one, loyal audiences will cherish every second of it, especially a scene in which Braff and Faison take an Astin Martin for a test spin down California's Pacific Coast Highway.

"We riffed so much in that scene that it became its own movie. I'm gonna put it on the DVD. None of it made sense for the characters in the movie. We would go off on these long improvisational tangents that had nothing to do with the scene. We were hugging, I'm like 'Why is the Astin Martin Dealer hugging me?'" Braff said.

Needless to say, we will be patiently waiting for those DVD extras to see Braison (yes, I just made that up and yes, it is their official shipping name) in action.

"People said I wrote Garden State so I could make out with Natalie Portman, and I wrote this film so I could speed an Astin Martin down the PCH [with Donald Faison]."

The bromance between the two actors is so public, it's palpable. Both actors constantly share photos of each other, adoring words and more on their social media accounts. And one look at Donald Faison's Instagram account proves he is truly smitten with his comedic co-star.

More like this
Eva Mendes Just Claimed Ryan Gosling’s “Ken” Underwear
By Rachel Mantock
At 28, Emma Thompson Was Already A Star — But Unhappy In Love, Actually
By Olivia-Anne Cleary
What Does The Presley Family Think Of 'Elvis'?
By Arya Roshanian
You Might Want To Rewatch 'Elvis' For This Britney Spears Easter Egg
By Grace Wehniainen
Get Even More From Bustle — Sign Up For The Newsletter