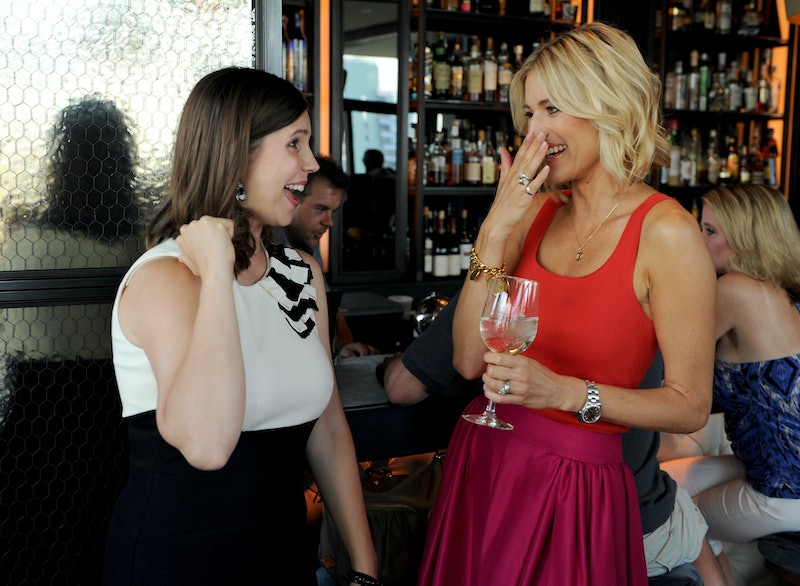 For a cast member still in her first season, Real Housewives of New York City' s Kristen Taekman has beaten the reality star odds. She’s managed to stay in the spotlight even in the face of some seriously outsized personalities, planned a bizarre, geocaching and ax-throwing vacation, made the best of a truly ridiculous tagline (“…but I’m preeeeetty!”), and made peace with the wane of her modeling career. She’s also been the target of a fight from almost every single member of the cast. What is it about Kristen that's catnip to confrontational women? Well, maybe it's because she simply can't keep her mouth shut, especially when it comes to things like marriages, kids, and friendships, and her "telling it like it is" is a little close to, well, nagging.

And while Former Countess Luann might be demoted to “friend of” for this season, but you’re more delusional than Aviva if you don’t think she’s been a real player this season. And just like every other housewife, she’s looked down her nose at Kristen on occasion. But they haven’t gotten into a real fight (…yet) so for the sake of argument, she won't be part of the list. But surely, they'll figure out a way to get into it by reunion time, which will hopefully cement what we all know: this show NEEDS Luann back full time.

Ramona Singer can get into it with almost anyone. It’s no surprise that she’d target the young, new cast member, especially one who has a sense of humor. Ramona may be hilarious, but she takes everything suuuuuper seriously, especially her hair.

Josh is a jerk, plain and simple. He makes fun of her (nonexistent) muffin top while she’s at work, he makes a big fuss over homecooked dinner, then claims he prefers eating out, and schedules conference calls every time he’s expected to head home. Totally justifiable that Kristen wants to take him to therapy.

Aviva Drescher has crossed the line between entertainingly batty and capital-C Crazy. Her “fight” with Kristen should have been a simple conversation until Aviva started throwing F-bombs around in front of children. Kristen was understandably taken aback, but instead of removing herself from an argument there was no way to win, she kept going around in circles. Pay attention, because that will be Kristen’s biggest fault.

Sonja was wasted, her feelings were hurt, and Kristen was in the wrong place at the wrong time — but by her own fault. Nothing good can come out of getting into an argument with a drunk Real Housewife. Heather and Luann were right — after they pulled Kristen away, Sonja immediately forgot why she was upset and proceeded to be fun for the rest of the night.

Heather might act like she’s all business, but she’s proven herself to be a pretty good, if undeniably bossy, friend. Still, she’ll harp on a small detail for hours until she gets the reaction she’s fishing for. While that’s a good tactic to deal with Ramona or Sonja, who won't acknowledge their own wrongdoings without it being pushed in their faces, Kristen will take any chance to nag at the particulars of an argument until it makes little to no sense. What should have been left as a quick blowup and quicker apology was made into a several-day-long fight that nearly ruined the Montana trip.

Kristen Vs. Aviva: Round 2

And speaking of Montana, Kristen managed to get into it with Aviva again when the latter tried to come up with an embarrassingly transparent attempt to get out of yet another Housewives vacation by claiming her asthma was too severe to deal with the… clean, non-polluted, countryside air? While Aviva was full of it, Kristen once again jumped into a stupid argument with both feet.

Carole got into her first official RHONY feud with Aviva at the beginning of this season, proving she has no problem throwing down if something she really cares about is on the line. And Kristen’s chronic foot-in-mouth-disease means that even though we only have two episodes left, she’ll probably make an offhand insult about Carole’s career, late husband, book, apartment remodeling, assistant, practical jokes…let's just say their first fight is inevitable.